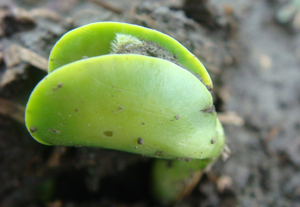 The following information was provided by Verdesian Life Sciences.

Preside CL opens the door for added nodules, bringing more nitrogen in and generating a healthier plant right from the start. The product provides four times more rhizobia than the competition, increasing the number of productive root nodules that fix more nitrogen for the plant.

“We’re in the business of providing farmers with the best start possible to their growing season, and this product pays off that promise, particularly as growers are planting as early as possible,” says J.J. Grow, chief executive officer for Verdesian. “We think soybean growers will appreciate the fact that Preside CL helps create strong, healthy plants that can withstand adversity early in the season.”

Preside CL also contains the Take Off technology from Verdesian that improves the nutrient acquisition and utilization of the plant. This combination of technology helps soybeans produce up to 65 percent more nodule mass than soybeans treated with a conventional inoculant. More nodule mass and root development lead to better nitrogen utilization, which, of course, leads to more bushels in the bin.

For seed treaters, the efficiency with which Preside CL is applied also helps the product stand apart. It has low viscosity, which limits stickiness during application to the seed, reducing bridging on treating equipment and thus the time spent handling the seed. The low viscosity also translates to ease of planting for the grower.

The Preside CL package consists of only two liquid bladder components, compared to the competitive standard of three, for ease and simplicity. Speed of application is also improved for the applicator due to the low use rate and low viscosity of the formulation. This minimizes the drying time and further speeds up the application process.

“The ease of use, in addition to product efficiency, makes the new Preside CL a top choice for seed treaters and growers who are looking to harvest the full potential of today’s high-value seed,” says Jim Pullins, marketing manager for Verdesian Seed Treatments & Inoculants.