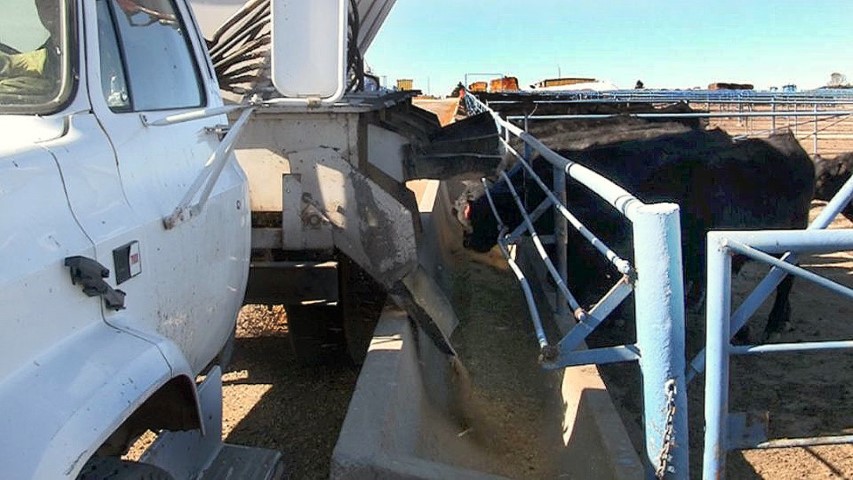 Northeast New Mexico and the Texas and Oklahoma Panhandle, known as “cattle feeding country,” is the largest cattle-feeding region in America. The facilities annually market more than six million fed cattle – 28 percent of the nation’s feed-cattle production, according to the Texas Cattle Feeders Association.

“The objective of the research station is not to test commercial products, but to facilitate beef cattle production research,” said Michael Hubbert, NMSU professor and superintendent of the facility. “We try to meet the objectives of the state’s cattle growers.”

Research at the center involves shipping protocols for cattle, particularly evaluating the health and performance of newly received cattle at feed yards, as well as nutrition and management of cattle from the feedlot to harvest.

“Our job is to find out how to make cattle healthier when they go to feed yards so they don’t have to use antibiotics on the cattle,” Hubbert said.

The U.S. Food and Drug Administration is implementing a voluntary plan for the livestock industry to phase out certain antibiotics. As consumer demand for organic and naturally raised beef increases, it is anticipated that antibiotic use for improved production efficiency will decrease and be limited to therapeutic treatments.

“Research at the Clayton center is focusing on how to vaccinate the cattle better, how to better use trace mineral supplements, and how to handle the cattle humanely,” Hubbert said. “Basically, we are seeing if we can use probiotics and different mechanisms to make the cattle healthier without giving them shots.”

Just as in humans, high levels of stress can affect the immune systems of calves. During the early stages of the calf’s life, vaccinations are given to help prevent illness.

Feedlot operators have had a perception that New Mexico calves are more susceptible to illness upon arrival to their facilities. For the past three years, researchers at the Clayton center have compared calves received directly from New Mexico ranches and calves received from a sale barn in South Texas to see if this perception is true.

“Some of the New Mexico calves did get sick when they had been in the feed yard on days 20 to 25,” Hubbert said. “However, with the sale barn calves, some got sick on days one to 14 after arrival.”

Another study conducted this year at Clayton was designed to see if novel nasal medication and feed probiotics improved the health and performance of the calves. The early findings of the study found that these two protocols did not show a benefit, but more work is being planned to explore this as an alternative to antibiotic use.

Mineral supplements in their diets also affect the health of cattle.

Researchers are studying the effect of organic and inorganic minerals on the health and growth of the calves to see if the prescribed intake is appropriate. The early finding is that the recommended levels of minerals appear to be sufficient, however data from liver biopsies will determine if the mineral programs at ranches provide adequate mineral stores for calves heading to the feedlots.