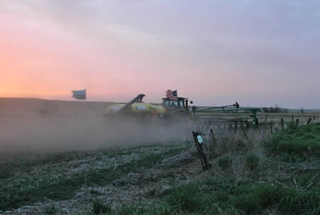 The Farm Rescue nonprofit in the Midwest is helping its 300th family this week.

The milestone comes just eight years after former North Dakota farm boy and UPS cargo pilot Bill Gross launched the organization to give back to the industry he still holds dear.

A handful of volunteers are helping harvest corn for western Minnesota farmer John Dubbels, who is being treated for myelodysplastic syndrome, also known as pre-leukemia.

Dubbels, 60, farms about 1,500 acres near Fergus Falls with his wife, Sheree, and his brother, Paul. He said in a telephone interview from the Mayo Clinic that they were able to harvest soybeans earlier this fall but that without help "it would have been a long struggle" to get the corn in the bin.

Farm Rescue plants and harvests crops for farmers in the Dakotas, Minnesota, Iowa and eastern Montana who have experienced an illness, injury or natural disaster. It's been operating since 2006, growing from a North Dakota operation with a shoestring budget and a few volunteers to a multistate nonprofit that's supported by donations, grants, dozens of business sponsors and about 1,000 volunteers from around the country. It now operates on an annual cash budget approaching half a million dollars.

"We are very thankful to all volunteers, sponsors and supporters for making it possible to achieve this major milestone," Gross said.

Farm Rescue helps about 50 farmers each year. Gross said this past summer that he expects that number to hold steady for a couple of years while the organization builds financial support so it can possibly expand geographically.

Gross, a graduate of the University of North Dakota flight school, is scheduled to speak at his alma mater on Nov. 5 about Farm Rescue and the importance of helping others.