In the last few years, Chris Adams has touched down in 11 countries. Business cards and brochures in hand, this young and business-savvy farmer-turned-globetrotter has one goal: build personal relationships with buyers for his North Dakota specialty crops.

“When I sit across the table from a customer in Dubai or Colombia or Peru, I can say, ‘I planted these beans, I cared for them and I cleaned them,’” he says. “They all want traceability, and you can’t get much better traceability than straight from the farmer.”

Through vertical integration, diversification and a non-conventional approach, Adams is transforming his family’s row-crop operation. For these reasons, Adams and his team earned recognition as a finalist for the 2019 Top Producer of the Year Award.

Adams is the fourth in line to continue his family’s farming legacy, which traces back to 1924. After graduating from college in 2010, he joined the operation, and today the farm is a partnership between Adams, his wife, Kelsey, and his parents, Steve and Darla Adams. The Adams employ seven full-time and 65 part-time team members.

“There aren’t many things we can’t grow here,” Adams says of his Red River Valley farm, which is home to nutrient-packed, rock-free 1’-deep topsoil.

Since Adams was four years old, he served as Steve’s co-pilot on the farm. He watched his dad transform the family operation into a thriving business that grew in size and efficiency. Adams knew he shouldn’t just be handed the keys to the farm his dad worked so hard to expand.

“Being a child coming into a successful empire seems like it’s all cupcakes and rainbows, but that couldn’t be further from the truth,” Adams says. “I felt shadowed by the success of my dad on the farm. I am not one to take money from anyone without earning it, so the next best thing was to trade my labor for the use of their equipment to build up equity in my own farming operation.”

Adams secured financing in his own name and searched for new land to rent. “In three years, I went from farming 500 acres to farming 2,000 on my own,” he says. “With the benefit of the free equipment, good markets and high yields, I was able to build up some much-needed equity to bring into the family farm partnership.”

During those high-profit years, Adams admitted he fell into the “get bigger” trap.

“I wanted to expand because I thought it was the ‘thing to do,’” he says. “Everybody wants to produce more, but the direction farming is going is adding value to what you already produce. With that, you’ll have growth and expansion.”

“I admire Chris’ interest in finding out new things and trying them out,” says Joerg Zimmermann, president of Global Ag Advisors, a Manitoba-based farm business advisory firm that works with clients in North America, and Adams’ peer group facilitator. “He treats setbacks and failure as an opportunity to get better next time.”

“Everybody wants to produce more, but the direction farming is going is adding value to what you already produce."

The father-and-son team has found ways to diversify within each crop. They raise seed beans and certified wheat seed to add extra value to traditional row crops. With dry beans, they own the full production process—from planting to processing to bagging and loading them into shipping containers.

“The holy grail for us has been the cranberry bean,” Adams says. For the last three decades, the farm has produced these niche beans, which are white with red speckles and shaped like a pinto bean. They earn premium spots on salad bars in the Mediterranean region and South America.

“The reason they are such a small market is because they are hard to raise,” Adams says. “They're similar to pintos and pink beans, as they change color and oxidize in time. And, they're not very fun to combine, since they shell quite easily.”

In the last decade, the Adams have produced, on average, 30% to 50% of the country’s cranberry beans. Adams saw that as a competitive advantage.

“Chris was trying to move a hard-to-market bean and I said, “Why not look at exporting?’” Gussiaas recalls. “He’s not afraid of risk and is just a step ahead of some producers. I admire and respect a guy like Chris who wants to take his farm to another step and market close to the consumer.”

Adams researched and joined trade missions through the North Dakota Trade Office. Soon he was connecting with wholesalers, grocery store buyers and restaurant owners from across the globe.

All In On Hemp

Always looking for new opportunity, Adams eyed an emerging U.S. crop: hemp. Although Steve’s initial response was, “You want to grow what?” the team researched the crop and analyzed the risks. They joined a pilot program for industrial hemp and have led both North Dakota and Minnesota in hemp acres the last four years.

“My theory was, if you’re on the ground floor of something new, you have the advantage in the long run,” Adams says.

For 2019, the farm has 700 acres of seed hemp (half the acreage is for certified seed) and 100-plus acres of CBD hemp, tended by a high school chopping crew to control weeds. While the crop is providing a profit bright spot for the farm, Adams is quick to admit the hemp industry is wrought with risk and shady characters.

“This is forming into a great, great crop and the pieces will fall in place over time, but I’m already tired of guys pretending to know everything who don’t have a clue,” he says. “Those kinds of guys are everywhere in hemp and they end up costing other farmers money. Do your homework and don’t settle until you find people you can trust.”

“My theory was, if you’re on the ground floor of something new, you have the advantage in the long run.”

Adams fields six to seven calls per day from potential hemp growers. He is quick to offer his insights to help other farmers navigate the uncharted waters of this crop. He knows what is good for the industry will help him execute a better plan for his farm.

“Chris is viewed as a thought leader while also possessing the unique ability to execute on plans,” says Marcus Knisely, president and CEO of AgCountry Farm Credit Services. “That combination of strategic thinking and the skill to translate strategy into operational implementation has played a big role in his success. He seeks out growth opportunities, both business and personal development.”

When analyzing new opportunities, Adams uses both micro and macro lenses. The team uses software to track real-time expenses, equipment costs and inventories. This allows them to have a clear break-even number to the unit versus to the acre or enterprise.

While this analysis helps him plan ideal crop mixes and marketing plan goals, he doesn’t let it detract from long-term goals.

“In farming, you can’t base your cost of production or revenue off one single year; it always affects the next year,” he says. “In our operation, there is more than just profit, gross revenue and net revenue. We look long-term: How is this field or enterprise benefitting the operation for future generations?”

Family: The farm is a partnership between Chris Adams, his wife, Kelsey, and his parents, Steve and Darla Adams. Chris and Steve manage the farm, and Kelsey and Darla work full-time in the healthcare industry. Chris and Kelsey have three children, Olivia, 5, Audrey, 3, and Archie, 3 months.

“Together with his dad, Chris has built a great team he can rely on—this frees up his time to work ‘on’ the business, rather than ‘in’ the business,” says Joerg Zimmermann, Adams’ peer group’s facilitator. “He is a very hands-on guy as well, and he will do anything on the farm if need be, which I think why his staff respects him a lot.”

Peer Group: Since 2017, Adams has been a member of a peer group of farmers from the Dakotas and Canada. They trade marketing strategies, benchmark financials and compare input prices. “Being part of this group makes sure I’m operating my farm at the tip-top of my game,” Adams says.

“Chris can securely run his ideas through our group,” Zimmermann says. “With all his new ideas, he needs people he trusts who can tell him to slow down and finish one project before starting another.”

After four years of growing hemp, Chris Adams has the scars to show for being a pioneer in the industry. He’s experienced first-hand fraud of shady suppliers, fly-by-night buyers and more. Yet, the crop’s profit potential keeps it on his crop roster.

Find more advice from Adams on overcoming hemp’s pitfalls and reaching its promise. 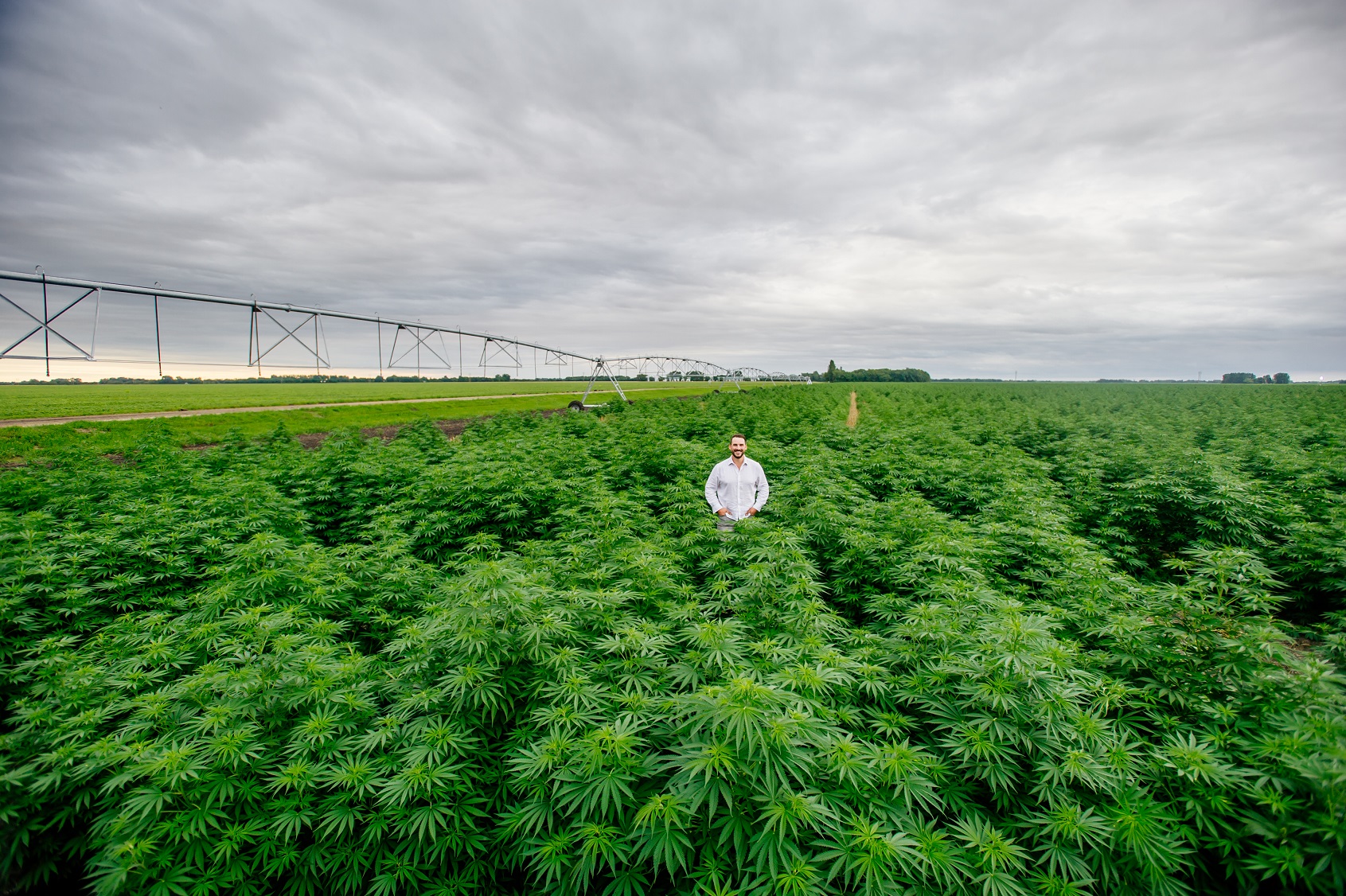