Now is a Critical Time for Spring Calving Cows 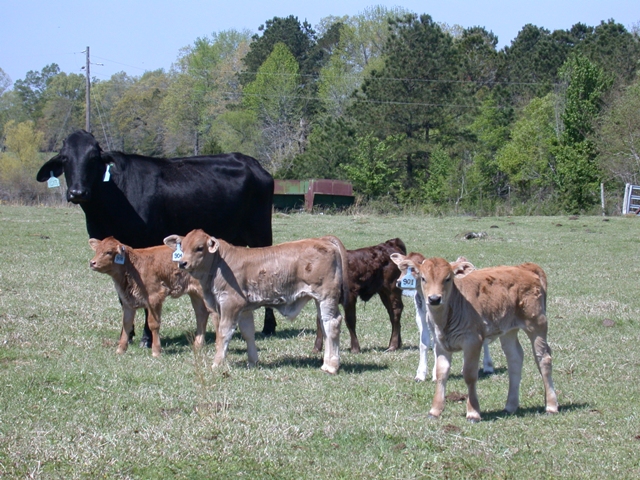 BT SPRING CALVES
( U of Arkansas System Division of Agriculture )

Less-than-normal rainfall means slower-growing fescue and some operations will be feeding hay longer this spring – a time when grass grazing is critical for spring-calving cows.

“In a normal year spring calving cows would be making a transition from hay to fresh growth cool season forage in many parts of Arkansas,” said Tom Troxel, associate head-Animal Science, for the University of Arkansas System Division of Agriculture.

“The spring forage provides quality nutrition for both cow and nursing calf,” he said. “Even if it starts to rain again, it will take time for the cool season forage to grow to the point it can be grazed, putting spring grazing four to six weeks behind.”

“If normal rainfall events do not occur, cool season forage such as fescue will be very slow in growing resulting in much longer hay feeding into the spring months,”

“The last time monthly rainfall amounts was above average was July 2014.”

“Remember, one rain event will not replace six months of reduced rainfall. It will take a number of rainfall events over a period of time to replace the 7.26 inches of rain that would’ve been the normal rainfall from August 2014 into January 2015,” he said.

The abundance of rain in spring 2014 meant cattle producers were unable to cut hay at the optimum time for quality.

“If cows are not properly supplemented with energy body condition will decline,” he said. “Because of the energy deficiency diet, cattle have used their fat reserves to maintain body function thus reducing body condition. This condition becomes very critical as the cattle production cycle moves into the rebreeding period.”

At this point in the year, many cattle producers are reaching the end of their hay supplies.

“Once the protein and energy values of the hay are known, the proper supplement can be determine to balance the diet,” he said. “Contact your local county agent for more information on how to conduct a forage test. Monitoring body condition and using the old technique of watching the shape and size of cow pies can aid a cattle producer in making supplemental feeding decisions, but neither can replace a forage test.”