Nurture Sick Soil Back to Health 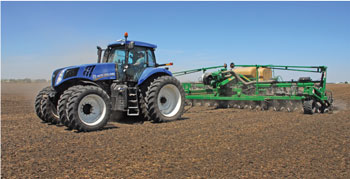 If both soils are in the best possible health, silty clay loam will always outyield silt loam because of natural fertility and waterholding capacity.

“It’s like comparing a day’s work by a healthy 80-year-old and a healthy teenager,” Ferrie says. “The teenager can always do more work than the 80-year-old. A farmer’s goal is to make every soil produce to its potential.”

But that won’t happen if soil is in poor health. In this case, Farm A had healthy soil, but Farm B had been abused. The two farmers followed similar practices, except the operator of Farm A had no-tilled for about 30 years. Farm B’s operator had disked soybean stubble before planting corn for many years, which destroyed soil structure and put in an impermeable compaction layer.

He followed corn with no-till soybeans. For the final years he no-tilled both crops. “But trying to no-till on top of a compaction layer is very difficult,” Ferrie says.

The operator of Farm A also did a better job of managing soil pH. Farm A’s healthier soil had less erosion, faster decomposition of residue and better water infiltration.

In 2011, Ferrie and Farm B’s operator began to bring the soil back to health. They first attacked acidity and density problems because those are the easiest to fix. They used vertical tillage to remove sudden density changes and compaction. In 2014, the operator put the farm back into a no-till system.

To correct acidity, the operator applied lime in the fall for three years—a higher rate on the silty clay loam and less on the silt loam. He incorporated the lime with a chisel plow in the fall, then leveled the field with vertical tillage in the spring.

Calcium in the limestone helped improve aggregate stability and soil structure by flocculating clay particles. (Acidity is a chemical aspect of soil health; density and structure are physical aspects; and microbial activity and diversity are biological aspects.)

Why did the pH of the silty clay loam not respond as anticipated? “I’ve seen this happen before,” Ferrie says. “The acidity had moved deeper than the 6" we sampled. The subsoil is acidic because the soil was left too long in an acid condition.

“If the whole field was silty clay loam, we might have continued our aggressive liming and vertical tillage for a few more years and raised the pH faster. But since it doesn’t represent the entire field, we went back to no-till and accepted the slower gain in pH. We just have to continue liming until we move the pH into the optimal range,” he says.

Improving soil pH has far-reaching effects. It frees up nutrients by affecting the biological component of soil health. “Most soil organisms that release nutrients don’t like acid conditions,” Ferrie says.

Improved soil structure results in better water infiltration. “Removing dense layers had the greatest effect, by allowing water to percolate into the soil. The calcium in the lime also helped, by flocculating soil particles,” Ferrie says. “Going back to no-till resulted in more biochannels in the soil, left by old crop roots.

“Farm B can’t yet match Farm A in infiltration rate, but Farm B’s rate is almost double what it was when we started,” he adds.

If you know what to look for, you can see the effect of increased biological activity as you walk across a field. “There’s a noticeable improvement in how crop residue is decomposing on Farm B,” Ferrie says. “At the beginning, multiple years of crop residue had accumulated on the surface. Now, by August, you can see the smaller pieces of residue from the previous year’s crop are already starting to decompose. Farm B’s biological component has finally started to cook.”

“While Farm B’s pH remained in the low-5 range, we were missing an important biological component, so little decomposition took place,” Ferrie says. “Now, we have the ‘herd’ of soil organisms starting to work for us.”

The silty clay loam, which also moved into the unusually high category, increased from 4.01 to 4.17.

Another component of B.R.A.N. is the carbon dioxide respiration test, which measures the amount of carbon dioxide respired by soil microbes in a 24-hour period. It, too, showed faster improvement in the silt loam soil, from 36.4 ppm in 2014 to 74.6 ppm in 2015. On the silty clay loam, it increased from 68.66 ppm to 78.37 ppm. “Both soils are now in the moderate to high level of biological activity, an ideal balance of biological activity and adequate organic matter levels,” Ferrie says.

“Biologically, we’re moving in the right direction,” Ferrie says. The B.R.A.N. test’s numerical soil health rating, using a scale of 0 to 50, considers factors such as nutrient availability, organic carbon, organic nitrogen and the carbon/nitrogen ratio. The score for the silt loam rose from 6.5 in 2014 to 9.5 in 2015. The silty clay loam rating declined from 11.2 to 9.7.

As the chart above shows shows, Farm A continues to outyield Farm B even with improved soil health. “Both 2014 and 2015 were wetter than normal growing seasons,” Ferrie notes. “So the yield increase on both farms’ lighter silt loam soil is to be expected, while that soil might run out of water in a dry year.

“It would be unrealistic to expect to close the yield gap in only five years,” Ferrie says. “It’s not like when nitrogen is the limiting factor, and you see higher yield as soon as you correct the problem. That’s why soil health testing is crucial—to document progress.”

Ferrie’s conclusions so far: Soil health can be restored, but it takes time. “It’s far better to avoid degrading soil health in the first place,” he says. “That requires paying attention to all three components—physical, biological and chemical.”

Building on the Systems Approach, the Soil Health
series will detail the chemical, physical and biological components of soil and how to give your crop a fighting chance.