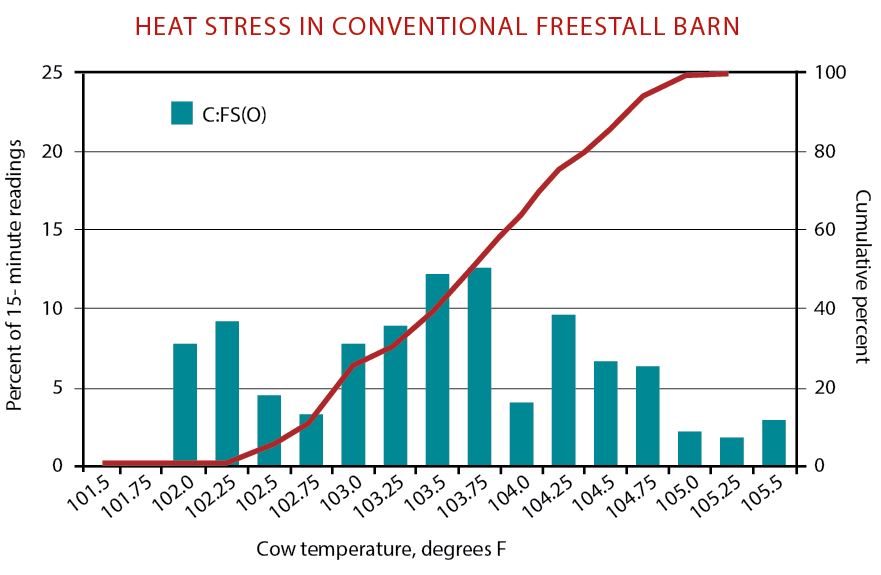 Its winter, but not too early to start thinking about gearing up for heat abatement strategies.

We conducted a study with Elanco this past August to monitor internal body temperatures in cows. Elanco provided and installed Thermochron temperature monitors or “iButtons” on 38 cows in two of my client’s dairies in South Florida.

The iButtons record temperature within 0.1°F accuracy every five minutes and were kept in the cows for 72 hours. Our main objective was to correlate body temperature and reproductive performance in the summer.

Fortunately for the study, but not for the cows, we happened to choose the hottest week of the summer. The average  temperature humidity index (THI) was in the severe, heat-stress range (over 80) throughout the entire period.

One of my clients had just completed a new, tunnel-ventilated barn, so we had a
simultaneous comparison with conventional freestall barns. Each barn was equipped with intermittent soakers over the cows behind the feed alleys.

In a previous article, I discussed the risk of early embryonic death when body temperature nears 103°F. If we allow the cow’s temperature to rise above this critical point at any time during the day or night, much of our heat abatement is wasted and we risk losing pregnancies. The eye opening results of this study explained our difficulty getting cows pregnant in the summer. But we were also a little surprised at the tunnel barn numbers.

The pen average body temperature in the conventional barns was 103.4° compared to 102.8° in the tunnel barn.

More importantly from a reproduction standpoint is the percentage of time during the day the average temperature of cows in the pen was above 103.5°. During 46% of the day, cows in the conventional freestalls were over 103.5° versus only 2.2% of the day in the tunnel barn.

Since this is a nutrition column, I should mention there are several feed management and nutritional strategies to help minimize the affect of heat stress. But nutrition can’t overcome extreme heat stress.
Both production and reproduction of cows in the new tunnel barn are showing appreciably better numbers than the previous year.

RICK LUNDQUIST,  of Lundquist & Associates and Nutrition Professionals, based in Duluth, Minn. You can email him at: [email protected].