The National Weather Service's Climate Prediction Center (CPC) looks for drought to persist across the western portions of the Southern Plains through July, but for removal of drought across the Corn Belt. The Seasonal Drought Outlook points out that drought intensified during the past month across the Central and Southern Plains, while the Midwest experienced a reduction. Their outlook points to those trends continuing. 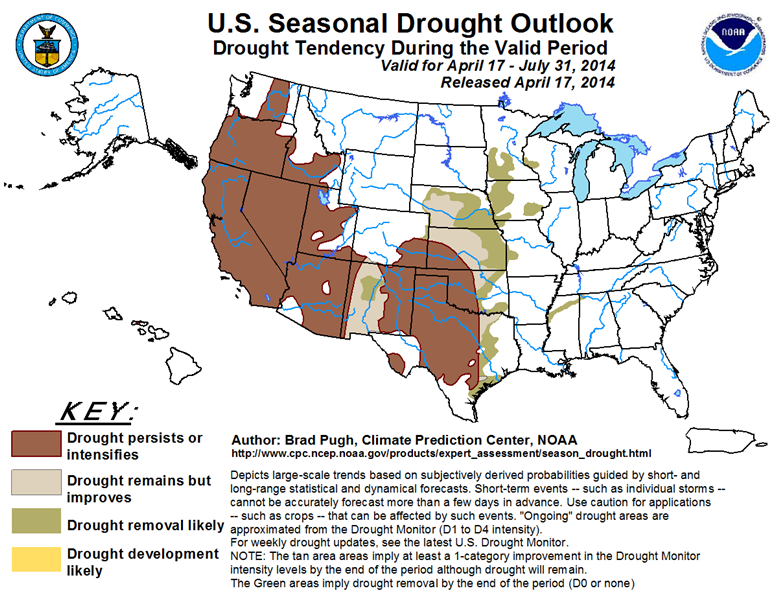 In its outlook for May, the CPC looks for above-normal temps across the Central and Southern Plains and throughout the bulk of the West, while below-normal temps are expected in the Northern Plains. The 30-day outlook provides little precip guidance, as it calls for equal chances of normal, below- and above-normal precip throughout the Plains, South and Midwest. CPC says the forecast is based on neutral ENSO readings in early April, although it states "there are many indicators that suggest that the ENSO state is evolving toward El Nino... Composites of past years in which El Nino conditions developed in summer were considered for the May outlook."

CPC Outlooks for May:

In its outlook for May through July, the CPC looks for an expansion of above-normal temps to include the Southeast and along the East Coast, as well as the West and Southern Plains region. The outlook also calls for above-normal precip across the four-corners states, but for equal chances of normal, below- and above-normal precip across the Plains and Midwest. The CPC says the temperature and precipitation outlooks were made considering ENSO conditions to be a minor factor in early summer. "Thereafter, increasing chances for El Nino and associated potential impacts were incorporated at longer leads especially for the core winter 2014-15 season," it states.