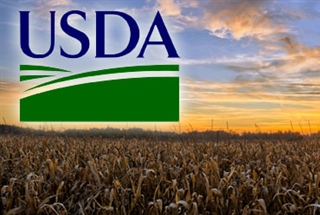 COARSE GRAINS:  Projected 2014/15 U.S. feed grain production is raised this month as higher forecast corn production more than offsets a reduction for sorghum and the lower estimates for barley and oats from the Small Grains 2014 Summary.  Corn production is forecast 80 million bushels higher at a record 14,475 million bushels as lower reported area is more than offset by a 2.5-bushel-per-acre increase in the yield.  Corn supplies for 2014/15 are projected at 15,736 million bushels, up 129 million from last month reflecting both higher production and a 55-million-bushel increase in beginning stocks from the September Grain Stocks report.  Projected imports are lowered 5 million bushels with tighter corn supplies in Canada.

Projected U.S. corn use for 2014/15 is raised 50 million bushels on higher expected feed and residual disappearance driven by the larger crop, higher projected meat production, and the lower price outlook.  Corn ending stocks are raised 79 million bushels to 2,081 million.  The projected range for the season-average farm price is lowered 10 cents on each end to $3.10 to $3.70 per bushel.

Projected sorghum supplies for 2014/15 are lowered 12 million bushels as a 26-million-bushel reduction in forecast production more than outweighs higher beginning stocks as reported in the Grain Stocks report.  Exports are projected 20 million bushels higher on strong demand from China.  Domestic use is projected 40 million bushels lower as export demand makes sorghum less competitive in ethanol production and for domestic feeding.  The sorghum season-average farm price range is projected 5 cents lower on each end to $2.95 to $3.55 per bushel.  The 2014/15 season-average farm prices for barley and oats are raised based on prices reported to date and the tighter supply situation projected for both this month.

Global coarse grain consumption for 2014/15 is raised slightly, mostly due to increased corn use in the United States.  Corn feed use is also increased for Egypt and Iran with higher imports this month.  Sorghum feed use is raised for China, also with higher imports.  Global sorghum consumption, however, declines with lower production and food use for Sub-Saharan Africa and lower U.S. domestic use.  Barley consumption is raised with higher feed use in China and EU.  Global corn trade is lowered this month, mostly reflecting a 3.0-million-ton reduction in expected imports by EU.  Exports are lowered for Canada and Russia.  Global corn ending stocks for 2014/15 are projected 0.7 million tons higher with larger stocks in the United States.