Odds for a Late-Planted Corn Crop

How much U.S. corn acreage will get planted after May 20?

By Scott Irwin and Darrel Good, University of Illinois

It is generally acknowledged that the U.S. average corn yield is largely determined by weather conditions during the reproductive and grain filling stages during the summer months. Still, weather conditions during other times of the year, as well as the timeliness of planting, are known to influence the yield outcome. In the case of the timeliness of planting, it has been demonstrated that U.S. average yields are negatively correlated to the portion of the acreage planted after the optimum date for maximum yield potential regardless of subsequent weather. With the slow start to planting the 2014 corn crop, there is some concern that a larger than average percent of the crop may be planted after the optimum date and therefore reduce the average yield potential.

Here, we examine the prospects for timely planting of the 2014 corn crop in Illinois. That analysis is extended to the U.S. based on the assumption that planting conditions experienced in Illinois can be applied to the rest of the major corn producing states. Prospects for completing planting of the 2014 corn crop in a timely fashion depend on four factors:

1) The date of the end of the optimum planting window,

2) The percentage of the crop already planted

3) The number of days suitable for planting in the remaining portion of the optimum planting window, and

4) The rate of planting per suitable day for fieldwork.

The USDA's weekly Crop Progress report indicated that 32 percent of the corn acreage in Illinois and 19 percent of the corn acreage in the 18 major corn producing states was planted as of April 27. For none of the 2014 crop to be planted late, progress needs to reach 100 percent by May 20, or in about three weeks. The first factor that will determine the prospects for completing planting by May 20 is the number of days that will be available for corn planting in the next three weeks. 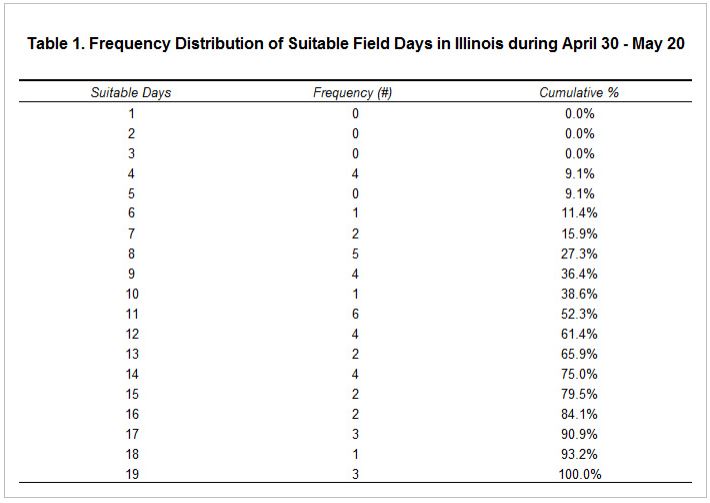 As might be expected, planting rates per suitable field day varied from year to year and were also higher during the peak week of planting presumably when the most producers were planting. In addition, the planting rate during the peak week of planting, increased slightly over time. These results do not provide a specific answer to what rate of planting per suitable day to expect in 2014, but they are useful in establishing some likely alternatives to consider.

For example, the average planting rate up to 90 percent planting progress was near 5 percent per suitable day, with little trend over time. In recent years this average rate has moved in a fairly narrow range, about 4 to 6 percent. The trend value for the planting rate during the peak week of planting is about 7.6 percent for 2014, but was near 10 percent in 2013. Based on this analysis, we evaluate three alternative average planting rates to assess the likelihood of timely planting in 2014: 5, 7, and 9 percent per suitable day. 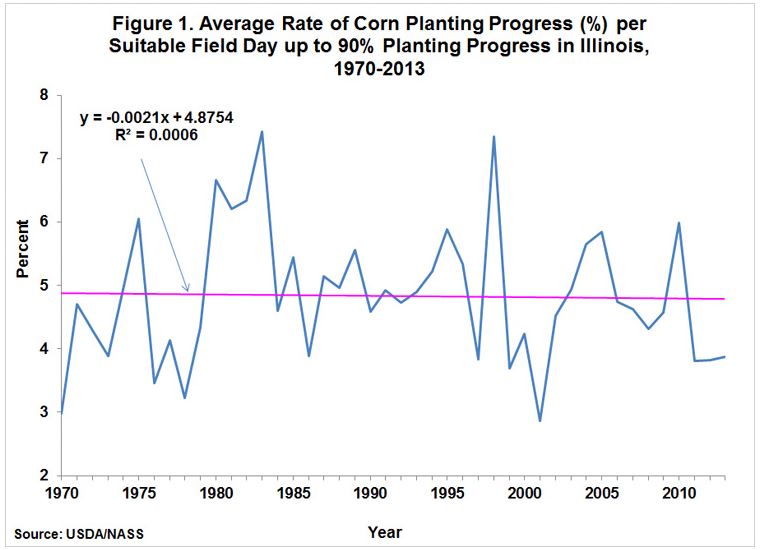 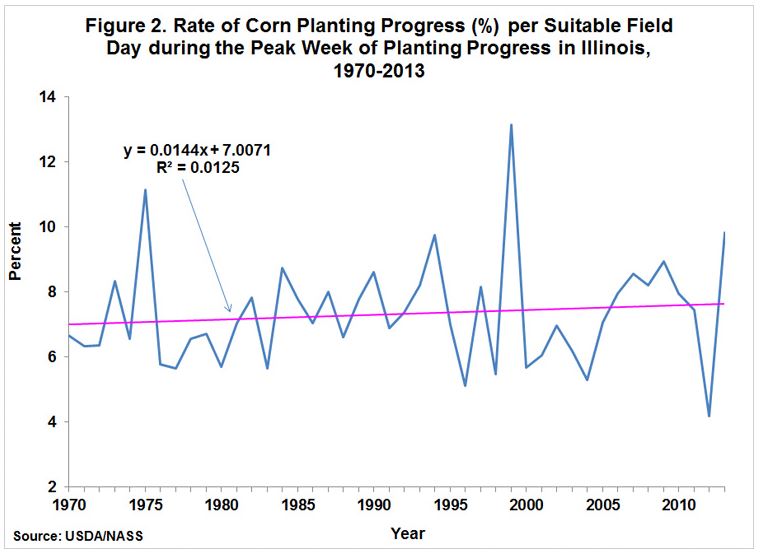 Since 32 percent of corn acreage in Illinois and 19 percent in the 18 major corn producing states have been planted, 68 percent of the Illinois crop and 81 percent of the U.S. crop needs to be planted over the next three weeks in order to have zero planted late. For the three planting rate alternatives, 14, 10, and 8 suitable days, respectfully would be required in Illinois and 16, 12, and 9 days, respectively would be required in the U.S. (rounded to the nearest whole day). The probability of the number of suitable days being less than the required days for zero late planting is shown in Table 2 (rounded to nearest whole percentage). The probabilities are drawn directly from Table 1.

Based on the historic distribution of suitable days for field work, there is a relatively high probability that some corn acreage will be planted late in Illinois and particularly in the U.S. in 2014 unless the average planting rate per suitable field day over the next three weeks exceeds the average historic rate and is near the rate normally achieved only in the peak week of planting. Even in this latter case, there is more than a 25 percent chance that some of the U.S. corn crop would be planted late.

The late start to the 2014 corn planting season and the relatively slow pace of planting progress to date increases the odds that more than the average percentage of the acreage will be planted late. For example, we calculate there is about a 60 percent chance that more than the average percentage of the U.S. corn acreage will be planted late (after May 20) if the average planting rate per suitable field day is near the historical average of 5 percent. A higher than average percentage of late-planted acreage would likely reduce expectations for the U.S. average corn yield. Extreme planting delays might also reduce expectations for the magnitude of acreage planted to corn. Based on current conditions and near term weather forecasts, planting progress in northern growing areas appears most likely to be delayed. The USDA's weekly Crop Progress reports released on Monday afternoons will continue to provide clues about the potential magnitude of late plantings.