On the Hunt for Wild Pigs 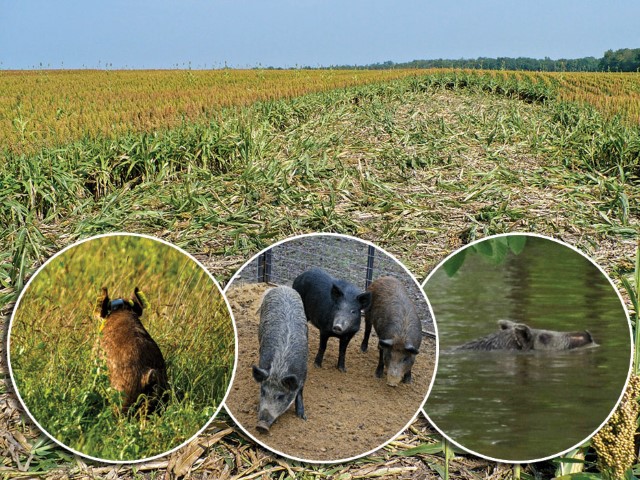 The wild pig bomb perpetually explodes. Shoot, trap, pressure and push, but wild pigs continue to march across the U.S. However, a chemical cavalry is approaching and might provide a major weapon in the control arsenal used by landowners and farmers: Kill the ultimate beast of survival with a poison pill?

Sodium nitrite is no magic pill. It’s a heavy-duty toxicant that suffocates wild pigs from the inside out. A single-dose poison, it be can be deployed at sundown and bring down wild pigs by morning. Researchers are hopeful a new oral toxicant will significantly curb wild pig populations.

Proliferation of wild pig populations means a persistent bleed on farm profits. Dale Nolte is the national coordinator for the National Feral Swine Damage Management Program and leads USDA’s nationwide effort to reduce the impact of wild pigs. He estimates wild pig depredation slams the U.S. economy with an annual multibillion-dollar bill, and roughly $1 billion of the total is exclusive to agriculture. “Recent research results suggest the prior published estimates of feral swine causing $1.5 billion in economic impacts are likely an understatement of actual damages, which could be as much as $2.5 billion annually,” Nolte says.

The staggering level of damage reflects consistent wild pig expansion. During the past 30 years, the wild pig population has grown from 19 states in 1985 to 39 states in 2016 (mainly attributable to illegal transport and release or enclosure escapes). Wild pigs are consistently on the cusp of a population explosion.

ows can deliver two litters per year with six piglets on average. A phenomenal reproductive rate is combined with exceptional intelligence, according to Jack Mayer, manager of the Environmental Sciences and Biotechnology Group at the Savannah River National Laboratory in Aiken, S.C. “In some cases and exercises, wild pig intelligence is on par with that of chimpanzees,” he says.

Mayer places the U.S. wild pig population at 6.3 million, with an overall estimate between 4.4 million and 11.3 million. Prolific breeding demands 50% to 75% of a pig population must be killed each year to keep population numbers in check, a control rate that’s often impossible to achieve.

John Kinsey is part of an international team of scientists that has been researching sodium nitrite as a wild pig pesticide under its commercial name, Hoggone, for almost a decade.

Kinsey, a wildlife research biologist with the Texas Parks & Wildlife Department at the Kerr Wildlife Management Area, northwest of San Antonio, says in Hoggone pen testing the average time from consumption to mortality is two hours. A single dose of sodium nitrite reduces the ability of red blood cells to transport oxygen to tissues: The pigs get woozy, fall asleep and never awake.

“In our research on scavengers, we haven’t seen concerns over secondary mortality. The amount of residual sodium remaining in wild pig tissue is very minimal, below the bacon line [the amount of sodium nitrite in bacon consumed by humans]. Also, detailed EPA environmental assessments show ground leaching isn’t a problem,” Kinsey says.

In a field situation, Hoggone would be registered with a species-specific feeder. At a minimum, Kinsey predicts use of Hoggone will require a pesticide applicator license. (Initially, sodium nitrite use would be restricted to state wildlife agencies.) The team’s pen trials showed a 95% mortality rate and their research has been submitted to EPA to obtain an experimental use permit. Kinsey hopes the team will conduct 2018 field trials in a free-range setting. He estimates a two-year wait for a Hoggone label.

“It’ll be no magic pill, but I think it’s going to be a significant weapon,” he says. “If we need to kill 70% of wild pigs just to maintain the current population, and considering we’re spending over $1 billion every year, then Hoggone could be an important part of an integrated approach.”

The Lonestar State is home to an astounding 2.6 million wild pigs, and Texas AgriLife estimates only 29% of the population is removed each year. “Overall, what we’re doing is not working, and I believe there are more pigs than estimated,” Kinsey says. “There is no other comparable species. We can’t even quantify the amount of ecological damage across the nation and that is very scary.”

Kurt Vercauteren, supervisory research wildlife biologist with USDA’s National Wildlife Research Center, emphasizes the addition of another weapon. “Any toxicant developed to safely manage feral swine will be another available tool. There are not expectations that other tools will become obsolete or less important,” explains Vercauteren, the primary USDA scientist developing sodium nitrite as a possible toxicant for wild pigs. “From my perspective, we need all the feasible tools available to reduce feral swine damages. Therefore, trapping will remain a valuable and important approach for reducing feral swine populations.”

In Oklahoma, Josh Gaskamp, a wildlife and range consultant with the Noble Research Institute in Ardmore, says Hoggone’s potential must be weighed against the lessons of Kaput. Texas and Louisiana approved Kaput (a warfarin-based toxicant) in early 2017, but controversy erupted following complaints from special interest groups. (The Kaput label has been withdrawn in Louisiana and Texas.) “I don’t think Kaput is dead, but it needs more research and transparency like sodium nitrite. We want to get rid of pigs but in a humane way. We must be transparent and demonstrate these techniques are effective,” he notes.

Gaskamp believes the sheer numbers of wild pigs will limit the efficacy of toxicants. “We lose entire crops over a couple of nights. Some farmers spend an unreal amount of money to replant, smooth fields, repair irrigation and clean up pecan orchards. For people who don’t know, the ability of wild pigs to wreck farmland is absolutely incredible. There is no other animal as resilient as a wild pig.”

Resilient, indeed. Gaskamp fits GPS collars on wild pigs to track range and movement, and he culls a few when it’s time to retrieve the collars. Essentially, he tracks the Judas pig in a sounder and shoots as many as possible when collecting the collar.

Gaskamp isn’t convinced an oral toxicant will be more effective than trapping. “There are rigorous label requirements and that means a lot of hoops to jump through for landowners. Many landowners are going to want to keep using the simplicity of traps,” he says.

“The unfortunate fact of recent history shows these wild pigs learn from every single weapon we use against them,” he adds. “Sodium nitrite kills wild pigs, but I’m just not sure how well it will work.”