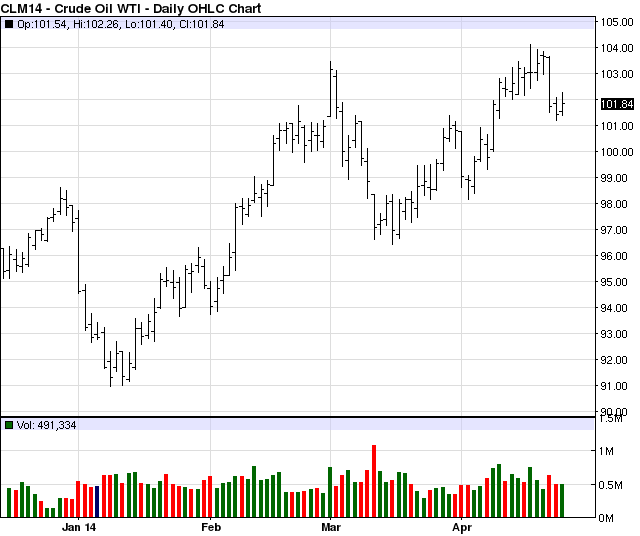 Crude Oil -- Current stockpiles of U.S. crude reached an all time high this week on a 3.5 million barrel weekly buildup. But Ukraine tensions and lagging stocks at Cushing, OK are working to support prices. Inventories at Cushing are currently at their lowest levels since 2009, holding WTI prices above $100.00.

Meanwhile, Gulf coast refiners have begun annual turnaround maintenance for summer blends and have backlogged crude for refining at the Gulf. Once traders' focus turns back to the glut of oil surrounding Cushing, WTI prices should fall back below $100.00. But Russia is a major world player on the crude oil scene and continuing tensions may trump supply side positives, and inject a war premium proportional with global demand for U.S. crude.

"The U.S. average price for regular gasoline increased three cents to $3.68 per gallon as of April 21, 2014, 15 cents more than the same time last year, and the highest average price since March 18, 2013. The East Coast and West Coast prices both increased five cents, to $3.66 and $4.03 per gallon respectively. Prices on the Gulf Coast increased two cents to $3.49 per gallon. The Rocky Mountain and Midwest prices were both up by a penny, to $3.45 and $3.64 per gallon respectively," according to EIA.

Look for information and statistics on LP and Farm Diesel in our weekly 'Farm Fuels in Focus' report.