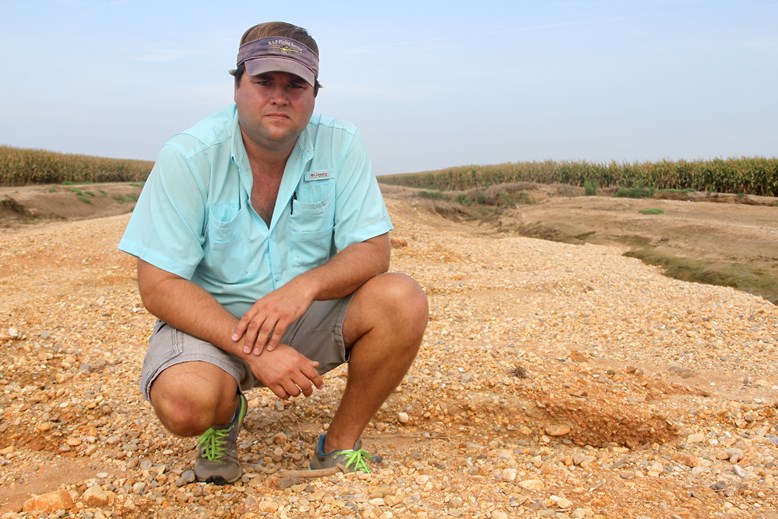 When Jason Smith was a boy in the 1980s, a farmer could drive into town, stop at a dealership and buy a seemingly endless variety of Bush Hog blades. Everyone he knew mowed field edges and had a ditch bank mower. Broad-spectrum herbicides were available at a high dollar, but when a technological messiah arrived in the form of Roundup Ready, the turnrow game was flipped on its head. Areas once mowed became spray zones as glyphosate prices dropped and pushed Bush Hogs deeper into the farm shed.

On many farming operations, mowing has given way to high-powered pre-emerges to kill vegetation, but bald ditches may spawn a regulatory leviathan. Silt gathering in the bottom of ditches and canals; eroded turn rows; washed out roads; and hammered PTO ditches are caught in a vicious spray cycle of unintended consequences with no simple fix.

“Spray more and more to fight weeds? It’s going to have to stop at some point. We’ve got sediment getting in our waterways and fertilizer coming out of our fields,” Smith says. “Farmers, for the most part, are doing what the experts are telling them and taking a ‘zero tolerance’ approach to pigweed, but it also includes killing everything else as well.”

Smith, from Watson, Ark., works 3,000 acres in the southeast corner of the state and serves as inspector of the Cypress Creek Drainage District (CCDD), which empties Desha and Chicot counties and is the largest district in Arkansas, formed in 1911. The CCDD canals start small, but can reach 120’ halfway across Desha County, and drain almost 600,000 acres impounded by the Arkansas and Mississippi river levees. Because of the fight against pigweed, higher than normal sediment levels are eroding into the CCDD canal system and funneling into the Mississippi River, according to Smith. “This never used to happen in this degree,” he says. “Because of the amount and efficiency of the pre-emerge herbicides used today, we don’t have perennials in winter to hold down dirt and it’s literally washing out the bottom of our fields.”

(For more on Smith's operation, see The Road Back to Conventional)

Resistant Palmer amaranth is the driver behind the sediment loss. In the initial period of Palmer ascent, the weed was viewed as a hard-to-kill field devil. Fast forward a mere handful of years, and Palmer has added more resistance muscle to its fierce reputation, even wreaking havoc beyond fields by causing a major problem in death - erosion. On a growing number of farms across the United States, every management decision is colored by resistant Palmer. Producers continuously spray field edges and ditches with overlapping residuals, desperate to avoid Palmer infestations.

Farm equipment changes are plain testament to the shift in strategy. Many producers remove blades from Bush Hogs and replace them with tips to create hooded sprayers. Elaborate hoods of all sorts have been modified or built from scratch to meet the demands of turn row spraying.

Within fields, crop canopies eventually shade out weeds, but the dynamic is different on the turn row or ditch bank. As harvest approaches, clean turn rows are neglected and broadleaf weeds take advantage. A small shower on a sunny Sunday afternoon? By Wednesday morning, pigweeds are jumping over the turn rows and ditches, with seed stage close behind. Heavy chemical attacks only speed up resistance. Even when fields are kept meticulously clean, ditches flood in winter and carry the Palmer march right back to the perimeter, often in a straight line. To the naked eye, it looks like an army of Palmer lined up to roll a field: pigweed creep.

“Everyone preaches a gospel of zero-tolerance of resistant weeds," Smith says. "I completely understand the rationale and I’ve been as guilty as anybody by smoking my turnrows. But I don’t do it anymore since I’ve seen the overall results to our drainage system."

As inspector of the Cypress Creek district since January 2016 and board member since 2013, Smith has received a growing volume of questions about sediment-clogged waterways. He gets calls from producers who mow and maintain grass on field edges, yet still suffer ditches filled with dirt and sand from higher ground farms. However, Smith’s hands are tied. Essentially, his jurisdiction is limited to big canals. The onus is on landowners, he says, but at present, any action is unlikely.

With the incessant swirl over Clean Water Act (CWA) legislation and the threat of government intervention, Smith is ringing an alarm bell on an issue he says many of his fellow producers feel doesn’t necessarily affect them. Yet, he is adamant: Inaction and neglect are far more costly in the long term.

“Lots of farmers think runoff, EPA, and NPDES are just part of a soundbite related to a livestock pond or the Gulf of Mexico,” Smith says. “What about the entire drainage network? From what I see, we do have a problem and we can fix it ourselves without the government having to step in, but we’re running out of time.”

Most often, chemicals sprayed on turn rows and ditch banks are off-label or not set at field rates, leaving agriculture exposed to the whims of EPA officials. If concrete nutrient runoff regulations are mandated, Smith fears producers in Chicot and Desha counties will be directly in the crosshairs.

“We’d be done," he says. "Anywhere with a big water network would get special government attention. The ‘I can do what I want’ attitude will make us pay a collective price.”

Before the era of precision land leveling and brown turnrows, the ground had protection: crops, grass or weeds. Today, a manicured show farm appears perfect and bare – until a big rain skins sediment from the turn rows to ditches to canals to rivers. Bald may be beautiful, but it’s not sustainable. In pockets of south Desha and north Chicot counties, super clean fields aren’t hard to find as producers compete with each other and fight against Palmer. The turn rows are spotless, but the bottoms of fields are washing away.

“Some farmers don’t see the problem yet," Smith says. "They don’t understand the volume of material coming off their fields. And it’s all getting worse because of pigweed.”

Take a given 120-acre field: Only 15 years back, it might have drained off five different sides and had a slough running through the center. Water took a long time to run off via five separate ditches before finding a canal. Now, with precision leveling, water leaves from a single spot, flowing fast as it hits a canal. Quicker drainage, faster canal flows, and bigger floods, yet most drainage districts haven’t adapted, according to Smith.

Chicot and Desha counties were once a spider web of waterways, heavily interlaced with bayous. When bayous flooded, sandy dirt, silt loam, and clay were set in motion. Heavier sand particles fell out first on higher land – modern cotton ground. Silt loam particles were deposited next on flatter ground. Water carried furthest from the bayou contained clay: tiny, flat particles bound like bread on the roof of the mouth – buckshot ground. The soil recipe is today’s erosion mess.

“We don’t have classic erodible ground in my area, but without vegetation, you bet it’s highly erodible,” says Smith. 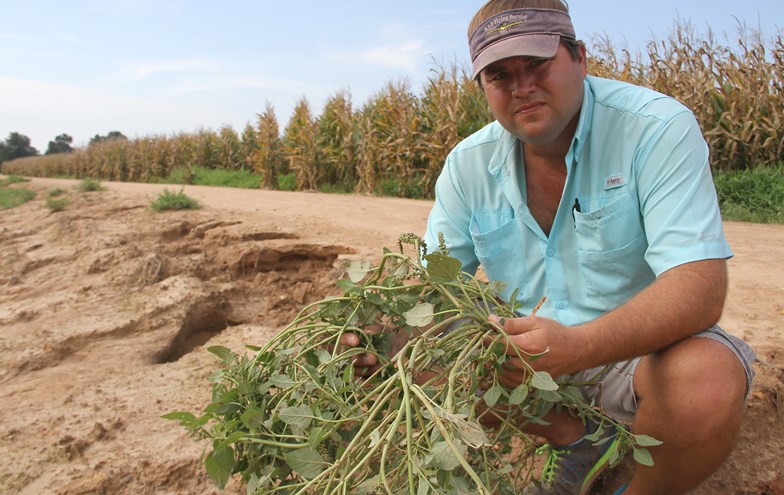 In Search of Solutions

In June, Smith was driving a Desha County backroad at 60 mph, cotton to the left, corn to the right, and narrowly avoided an accident, slamming his brakes and staring down into a 20’ depression. A 5” rain mere days before first washed out a turnrow and then took a section of gravel road with it.

Smith doesn’t shy from practical remedies to runoff and offers a tiny amount of wheat on a 2,500-acre farm as an example: Plant 40 acres of wheat and save the seed at cutting. In the fall, after standard harvest work, sow half a bushel of wheat on problem fields and make two passes on the bottom end beside the PTO ditch. Sow turnrows and drainage ditches in wheat for the winter.

“A week’s work would bring a tremendous reduction in runoff,” Smith explains.

What about fall work to get ground ready for minimal or no till in spring? Working a field to bare dirt and bedding up before the colder months isn’t necessarily helpful, Smith says.

“Continuous rain over the winter beats down on exposed ground," he says. "Fall prep may look good on paper, but sediment is pouring off the fields. We need residue just like other parts of the country.”

“You might say the road to regulation is paved with good intentions,” says conservationist Dan Prevost of Delta Farmers Advocating Resource Management (FARM). “Look north to Iowa and the Des Moines Water Works (DMWW) controversy. Iowa is leading the way for nutrient reductions in the Midwest, but is it enough? Those drainage districts involved may still be on the hook.”

If the DMWW successfully sues drainage districts in three Iowa counties due to high levels of nitrates entering the Raccoon River, the court ruling could rip open the legal door on a host of lawsuits and foreshadow the upending of the CWA. Delta FARM was formed in 1998 by a group of producers concerned over the looming problems associated with nutrient and sediment runoff. In 2008, Delta FARM, along with the Mississippi Department of Environmental Quality and a host of other partners, developed a nutrient reduction strategy for the region.

“We’re trying to stay ahead of regulation,” Prevost says. “In Florida, Iowa, Maryland and other states, increased regulation is becoming a reality.”

“Start with lighter soils on sandy, higher ground," he says. "Just begin with a single field or two and try a cover crop in winter. Runoff, compaction and drainage are likely to all get a major boost.”

Ideally, a Bermuda grass turnrow chokes out pigweed, but Stevens says Bermuda can get pulled into fields and becomes an issue. Stevens sprays an MSMA and diuron combination on Bermuda turn rows to kill weeds, yet protect grass. He is careful not to expose turnrow and ditch weeds to the same chemical packages used on his crop fields.

Overall, Stevens emphasizes the efficiency of a cereal rye cover in the fall: “I’m talking turnrows and everything. The cereal rye does an amazing job of laying down and forming a mat to help with pigweed suppression. That’s probably where we’re going in the future.”

Stevens is currently trialing cereal rye on his Discovery Farm fields. In addition to runoff control and pigweed suppression, cereal rye has made a significant difference in irrigation efficacy. Prior to the cover, Stevens consistently had difficulty getting water deep enough for moisture probe registration, but the cereal rye dramatically improved moisture penetration.

“These tools may reduce irrigation runoff by 30% to 50% and thereby impact sediment loss, depending on grower and field,” he says.

Stevens is experimenting to measure every drop of water on and off his fields. In his area, he sees greater sediment runoff and washout of turnrows, yet more pigweed, each year.

“I don’t want to let a pigweed go to seed, but I also know this is a fight that lasts forever,” he says. “All things considered, I think agriculture is headed toward cereal rye because it captures water, influences soil health, and suppresses weeds.”

Real solutions are waiting, but the clock is rolling, Smith emphasizes: “People have got pigweed blinders on. They see pigweed right in front and they’re worried about spending extra money. Meanwhile, there’s a runoff problem creeping around behind.”