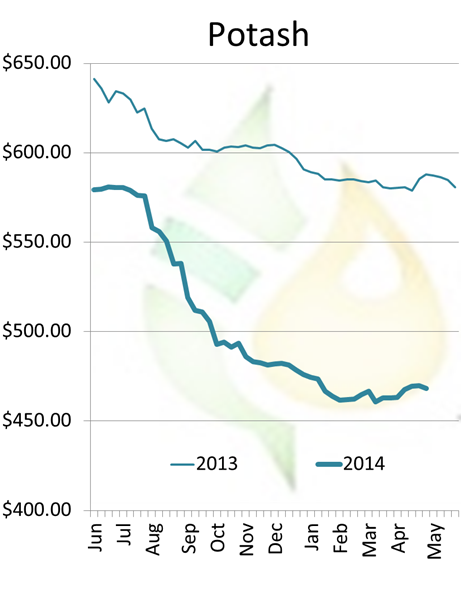 Potash prices dipped lower during the last week led by declines in South Dakota and Kansas. All other states were relatively unchanged. We pulled the trigger yesterday on the remainder of potash for spring application -- click here for more. Not because we necessarily see dramatically higher prices for potash ahead, more because of mounting supply uncertainty, and the constraints of time. It's not really a 'late' plant yet, but its surely not early either. Demand will heat up here in a hurry and likely inject price strength.

The U.S. Surface Transportation Board will receive mandated updates on the transit of agricultural goods including fertilizer on Friday, April 25. BNSF has already submitted specific plans to expedite shipments of fertilizers to the oversight board, but as of midday Thursday, Canadian Pacific Railway had yet to submit a plan of their own.

We are 100% filled on potash for spring. 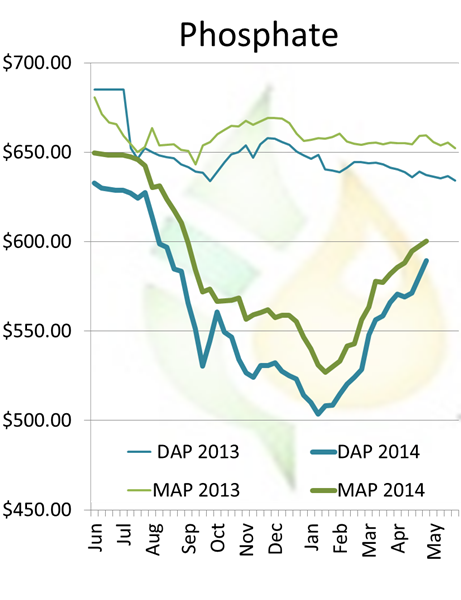 Phosphate moved higher again on the week and where we see -- at the worst -- mild upside risk for potash, the same transport difficulties impose much more risk on phosphate. The difference is in the inventories and as Canadian potash stores are bulging, North American phosphate stocks are low.

Increases in corn futures pricing of late have pushed expected new-crop revenue to levels that many did not expect this year, but $5.00 does appear to be a magnet for December corn futures, and if the runup in corn pricing influenced phosphate higher, the contract's failure to move to the next leg higher could limit phosphate purchases up north later on. Especially if phosphate continues higher through the next few weeks, or if delivery continues to be a problem.

We are 100% filled on phosphate for spring.

The following is an updated table of P&K pricing by the pound as reported to your Inputs Monitor for the week ended April 17, 2014.