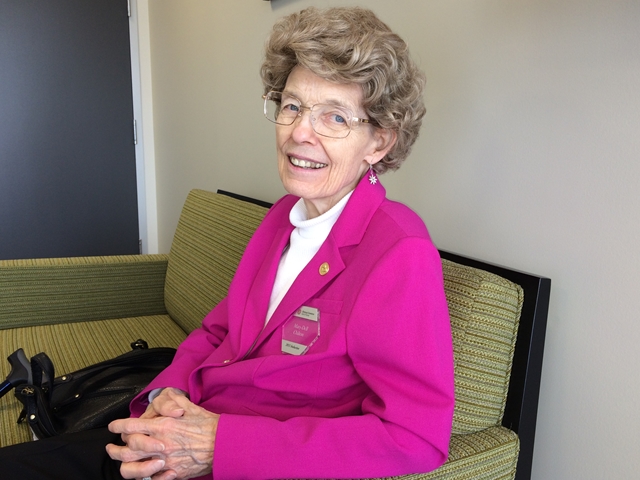 She speaks softly and politely, but there’s no mistaking the smarts and strength of Dr. Mary-Dell Chilton, who led the team that developed the first transgenic plant in the 1970s.

That accomplishment—and her continued research in the area of genetically modified plants, has landed her numerous honors, including the World Food Prize in 2013. A founder of Syngenta’s biotechnology lab, she remains a distinguished science fellow at the company.

This spring, Dr. Chilton and her work were recognized again when she was inducted into the National Inventors Hall of Fame in Alexandria, Va., with 13 other notable innovators. (Honorees included the inventor of Bluetooth, the creators of the first commercially available artificial skin, and the developer of the graphical calculator, and more.)

Dr. Chilton spoke with AgWeb during her visit to Washington for the honor. An edited excerpt of the conversation follows.

What she sees as the future of plant technology:

“The idea is to find a good spot [to insert the gene into the plant]. What’s good? ‘Good’ means the trait you’ve put in expresses at a high level and that it’s stable over time. That’s what a farmer needs in his crop. That’s the future as far as technology.”

How she thinks the direction of plant traits might change:

“I think in the future the type of traits that we work on will be more consumer traits—more focused on what will change the end product for the consumer, not for the farmer.  We can change the nutritional quality, improve the shelf life, and the attributes that the consumer or end user can see as beneficial. The consumer right now is saying, ‘What’s in it for me? It has not improved from my point of view, so why should I take the risk”--the so-called risk? I think that’s a fair question for a consumer to ask.”

On the difficulty of adding nutritional or other similar traits to plants:

“The things we did first were the easiest things. The longer—the longer you watch, the more difficult the projects will have been. Making the plant tolerant to drought or cold—which would be a farmer trait—is much more challenging than just adding one gene that lets the plant make BT to protect itself from an insect.”

What she thinks about the development of anti-GMO sentiment since she began her plant research in the 1970s:

What she thinks will happen with transgenic plant technology, agriculture, and the public:

“I hope to see the technology accepted by the public—embraced even—in my lifetime. How do we do that? That’s a tough one, but life is full of surprises. One key event—like getting golden rice out to people who need it—could be (the catalyst). Otherwise, it may be a long, long time.”

Her advice to those interested in a career in plant technology:

“I’m a big believer in majoring in chemistry or physics (or biology). You need to know some fundamentals if you want to make something new.”

The career accomplishment that gives her the most pride:

“I’m proud of the kids I’ve worked with and trained. … I just have one piece of advice for young people: Do what you love. That’s what I did, and it came out OK.”