The Market Facilitation Program is Back

While the trade war with China rages on,  President Donald Trump tasked USDA with creating a second year of tariff aid payments under the Market Facilitation Program (MFP). The agency faced two significant challenges: One was the pushback from corn growers who felt they were shortchanged by the penny-per-bushel payment they received in 2018. The second challenge was to not skew planting intentions, a  potential problem resulting from inclement weather. USDA is solving both challenges by offering payments at a single rate for all covered commodities.

Each county will be assigned an MFP payment rate based on historical production. All growers in a county will receive the same rate, regardless of the eligible crop grown. Payments will be based on reported planted acres for 2019, which cannot exceed 2018 plantings.

Program payments will be split into three parts, the first coming as soon as late July. The second and third payments will come in late fall and early 2020, respectively, according to Agriculture Secretary Sonny Perdue. The latter two rounds of payments could be canceled if the U.S. and China can resolve the trade dispute, Perdue says.

Thirty-four percent of farmers plan to file prevented plant claims on more than a quarter of their acres, according to a Farm Journal Pulse poll in early June. Chip Flory, “AgriTalk” host and Farm Journal economist, calls the numbers unprecedented.

“What you’re talking about is somewhere between 7 million and 8 million prevented plant acres in corn,” Flory says.

Those reporting more than 50% of their acres going to prevented plant are located in northwest Ohio, southeast Michigan, Indiana, South Dakota, Minnesota and along the Missouri River.

Steve Pitstick of Maple Park, Ill., told Flory he probably won’t be able to plant a quarter of his corn. “We’ll give soybeans a chance up until the Fourth of July. Then it’s over—the season is over,” Pitstick said. “Part of me feels like I’m losing a close friend or a family member. It’s tough.” 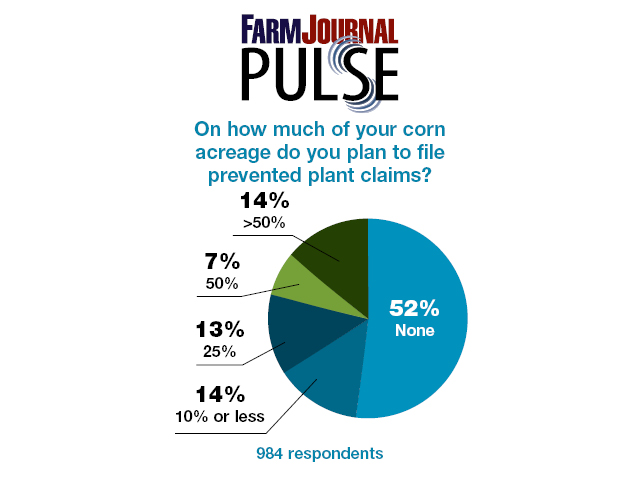 The $19.1 billion disaster aid bill was approved by Congress in early June and is aimed at helping communities around the country recover from hurricanes, floods, tornadoes and fires.

The measure would provide $4.6 billion to help farms and rural communities rebuild. Of that amount, $3 billion would go toward direct reimbursements for lost crops and livestock. There is also $3.25 billion set aside for Army Corps of Engineers disaster mitigation projects.

Additionally, the bill waives the adjusted gross income for the 2019 Market Facilitation Program (MFP). “If 75% of the income comes from farming, ranching or forestry-related activities, then farmers earning above $900,000 a year in average adjusted gross income can participate in the Market Facilitation Program,” says R.J. Karney, director of congressional relations at the American Farm Bureau Federation. “Payments are capped at $125,000 per person or legal entity.”

After the bill’s passage, rumors swirled throughout farm country that USDA Secretary Sonny Perdue would use the disaster aid bill to help farmers sidelined by Mother Nature. To do that, he would have to change some of the language in the bill to broaden coverage and allow producers to have higher rates of coverage for prevented plant claims. At press time, it was still unclear what would happen in this arena. For more information, visit us online at AgWeb.com.

EPA approved a summer waiver for the sale of E15 fuel blends exactly one day before the June 1 deadline for fueling stations to switch over to summer blends that would have excluded the 15% ethanol blend. The move had long been pushed by biofuels groups and was a key farm-state campaign promise made by President Donald Trump.

While EPA made some minor changes to the Renewable Identification Number (RIN) process to increase transparency, the agency did not place any constraints on the RIN waiver process, which has let refiners reduce the effective minimum biofuel blend requirement under the Renewable Fuels Standard (RFS).

“While corn farmers are immensely grateful that the barrier to year-round E15 has been lifted, we won’t be able to reap the full benefits if EPA continues to allow oil companies to avoid blending biofuels in accordance with the RFS,” says National Corn Growers Association President Lynn Chrisp.

Meanwhile, a Government Accountability Office (GAO) study released in  June found renewable fuels have had little or no effect on gas prices. The study reports the renewable fuels standard lowered prices slightly in areas near ethanol plants while raising prices elsewhere. The GAO study says greenhouse gas benefits from biofuels have been “limited.”

The study was requested by Sen. James Lankford, R-Okla., who has sponsored efforts to roll back the RFS.