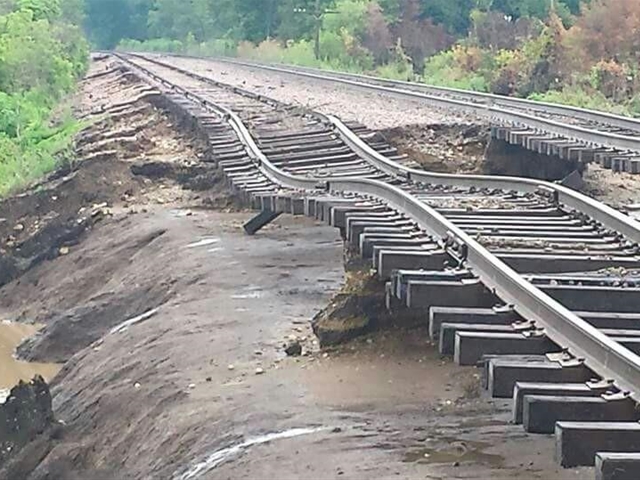 That’s what trucks traveling from Brazil’s top soybean and corn producing region, Mato Grosso, often face on their trips to newly-expanded export terminals in the north. During the last commodities boom, Brazil’s exports were disrupted by port bottlenecks that saw scores of ships waiting to load. Now, with many of those issues fixed, another weak link has been exposed: the dire state of the nation’s roads.

With 60 miles (97 kilometers) of the 1,000-mile roadway known as BR-163 still unpaved, about 40 percent of new port-terminal capacity in the northern state of Para will probably be idled this season amid bottlenecks and delays, according to Kleber Menezes, the state’s transport secretary. That raises costs for everyone involved, from farmers to truckers and shippers.

“When it rains, traffic is simply disrupted,” Menezes said in a telephone interview.

In the region crossed by BR-163, it rains more frequently in summer when the soybeans need to be carried from the countryside to the port. The monthly average for precipitation during the summer season in Itaituba, a municipality on the way to the port, is about 295 millimeters (11.6 inches) and flooding is common, according to historical data from Brazil’s Meteorology Institute, known as Inmet. In comparison, the yearly average for the municipality is 182 millimeters.

Brazil is already the world’s biggest shipper of soybeans, coffee, sugar and orange juice, making it an agriculture superpower that rivals the U.S. and Europe. The country’s output and export of soy are both expected to rise to records in the current crop year. In some ways, though, Brazil remains an under-utilized market, with plenty of undeveloped farms and arable land that can still be brought into production.

As crop harvesting accelerated during a boom starting in the 2000s, waiting times for vessels to berth were often the problem, growing to months with lines of trucks reaching as long as 60 miles waiting to be unloaded. Those problems have disappeared in the past two years as shipping capacity was increased and new procedures sped up loading times, especially at the main ports in the country’s south.

Now, ports in the north are catching up. Private investments from companies including Archer-Daniels-Midland Co. and Cargill Inc. will lift port capacity in Brazil’s north and northeast regions to 42 million metric tons this season, according to Edeon Vaz Ferreira, a coordinator at Movimento Pro-Logistica, a lobbying group for soybean farmers. That’s up from about 27 million tons the previous season.

Shippers, though, won’t be able to take full advantage. The lack of a strong system of paved roads in the region will most likely limit amount of grain handled by the terminals to about 30 million metric tons, Ferreira said.

The nation’s economy has seen two straight years of recession, and political scandal and corruption have rocked Brazil’s financial stability and sparked currency declines. That’s a problem when it comes to road improvement, which is usually funded by the government.

"The dreamed exit through Brazil’s northern ports has finally come true,” Ferreira said by telephone. “But we still can’t use their full capacity."

Paving on the BR-163 should have been finished in December 2012, but some contractors had to be replaced, creating delays, according to Brazil’s transportation infrastructure department, known as Dnit. The work is now expected to be completed in December 2018.

Menezes, the transport secretary, was the head of the first project in the state combining road, riverway and sea shipping. He helped build a terminal in 2014 at Para’s Barcarena port with Bunge Ltd., which now partners on the facility 50-50 with Amaggi Group, a Brazilian trader. Last year, 2 million tons of grain was exported through the joint-venture terminal known as Terfron. That’s just half of its total annual capacity of 4 million tons.

"Logistic costs to export grains through Northern ports has been increasing due to difficulties in road transportation," Terfron said in an e-mailed statement in response to questions. Once the BR-163 roadway is totally paved, the terminal will be able operate at its full capacity with the transport time from Mato Grosso to the port expected to fall by 20 percent, according to the company.

In an attempt to reduce their dependence on Brazil’s government, trading companies including Cargill, Bunge and Louis Dreyfus Co. are planning to build and operate a railway that would run from Sinop, a soybean-growing region in Mato Grosso, to Itaituba, where the grains will be placed in barge fleets that will drive the cargoes to different ports in the north.

The companies are planning to invest as much as $4 billion in the 580-mile railway, which would take 12 years to be finished. The project was included in Brazil’s infrastructure concession plan that was announced in September and an auction to determine a builder is expected for 2017.

"We really want this railway, but paving and maintaining the final route of BR-163 in good condition has been a need for more than a decade," Clythio van Buggenhout, a port director at Cargill in Brazil, said in a telephone interview.