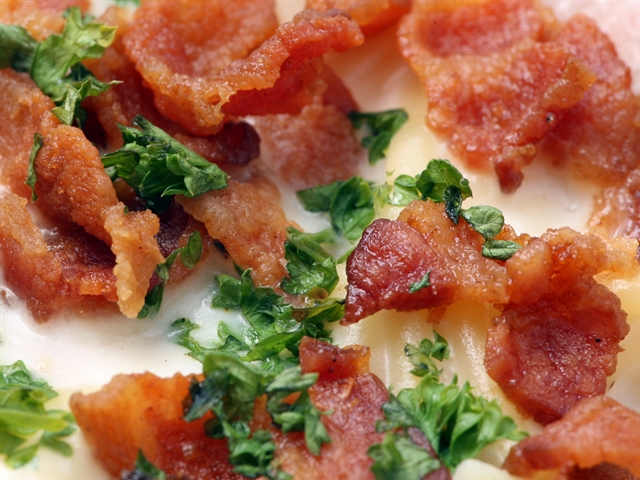 Bacon is finally getting a bump as Americans add the fatty strips to everything from corn dogs to french fries, boosting demand while inventory shrinks.

Pork bellies, the cut of meat used to make bacon slices, have surged 174 percent since hitting a five-year low in April, according to wholesale prices from the U.S. Department of Agriculture. The price reached $1.6968 a pound Friday, a one-year high.

Bacon-centric food items are fueling sales at Wendy’s Co., which added bacon fries, and McDonald’s Corp., with its sausage and bacon breakfast sandwich. Other culinary wonders include the bacon veggie burger.

One reason for this enthusiasm for all things bacon is that, at least until recently, it was relatively cheap and plentiful, according to Brian Grete, editor of Pro Farmer in Cedar Falls, Iowa. While prices for pork-belly were decreasing earlier this year, prices for beef, a competing protein, reached a record in May.

Still, pork has become a boom-and-bust market. Prices surged in 2014 as a virus killed more than 8 million piglets, after which farmers expanded output.

This year’s rally isn’t expected to last as summer winds down and pork-belly demand abates, according to Don Roose, the president of U.S. Commodities Inc. in West Des Moines, Iowa. During the outdoors grilling season, Americans tend to eat more bacon, lettuce and tomato sandwiches, and top their burgers with rashers.

Hogs are once again flooding the market, with pork production rising 15 percent in June from the prior year. Wholesale pork has plunged 29 percent from a year ago. Bacon is the bright spot -- for now.