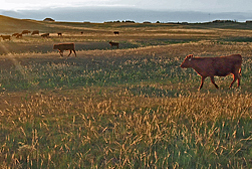 U.S. Department of Agriculture (USDA) scientists and their colleagues have conducted research showing the potential response of rangeland plants in arid regions of the United States to the conditions that will occur with climate change, according to a paper published today in Nature.

"Agricultural producers want to know how global climate change is affecting their production and management practices," said ARS Administrator Chavonda Jacobs-Young. "This work is one example of how ARS scientists are helping producers meet climate change challenges and continue the cost-effective and environmentally sustainable production of food and feed."

A plant community gets a jump-start on its growing season when the first species leafs out earlier in the spring, and the growing season continues until the last species enters senescence in the fall. So while warming temperatures can increase the length of the growing season in some grasslands communities by promoting earlier spring growth, elevated carbon dioxide levels can help plants conserve water and delay fall senescence.