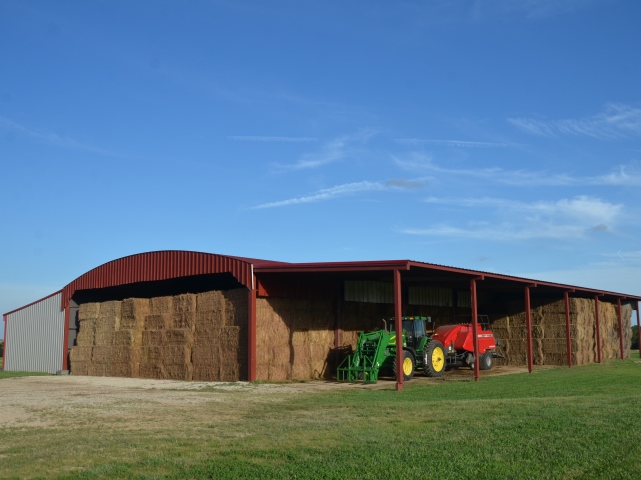 When the rain ends or slows and the sun comes out, it becomes time to put up hay according to Colin Hill, agronomy graduate assistant with University of Missouri Extension.

"But, with all of the moisture in southwest Missouri, it is important to ensure hay moisture levels are correct before baling to prevent hot hay quality loss and the chance of fire," said Hill.

The moisture of dry hay at baling is critical to hay quality during storage and can be the difference between high-quality hay and trash, according to Hill.

"Hay baled with more than 22 percent moisture should not be put into storage for at least 30 days, especially if hay will be stacked several layers deep," said Hill.

Safe storage temperatures are less than 120 degrees, above this excessive molding and heating occur, fire danger begins at an internal temperature of 170. Bale temperatures usually peak four to seven days after baling, and can rapidly increase if conditions are favorable.

Bales stored outside don't present a threat of barn fire danger, but quality remains an issue according to Hill. Excessive heating and molding can cause the loss of as much as one-third of the feeding value of hay bales at 28 percent moisture.

"Outside storage combined with loss of feed value due to poor digestibility can result in a loss of total feed during storage of around 25 percent. That results in a 25 percent loss of the initial investments like land, fertilizer, time, and fuel," said Hill.

Following some general guidelines when storing dry hay outside can reduce storage losses.

For starters, always store bales on a well-drained area. Some farmers place bales on poles or crushed rock to minimize losses on the bottom of bales.

Use a minimum of three feet between bale rows for air circulation, and always place bale rows going north to south.

Avoid storing bales under trees and in the shade of buildings. If space is available, store some bales inside, especially higher quality hay that should be used near the end of the feeding period.

"Investing in a hay moisture tester and a bale thermometer can improve hay quality and remove guesswork and stress from haymaking," said Hill.