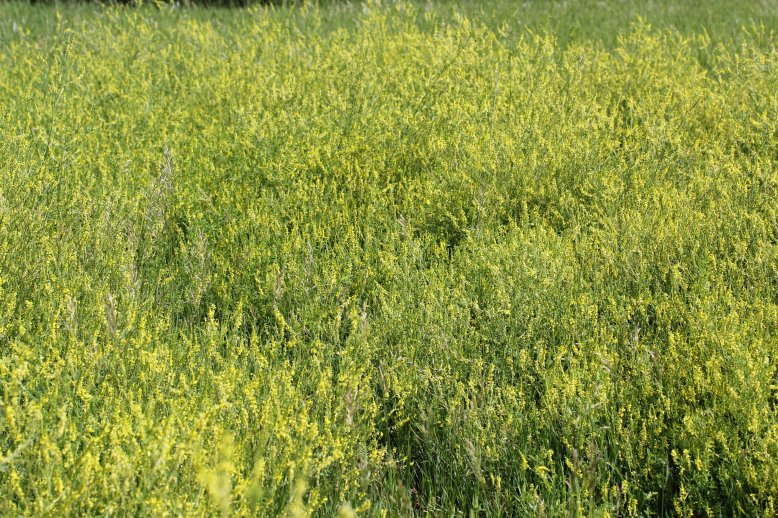 Sweet clover contains a high level of a chemical that can be converted to an anticoagulant.

Improperly curing hay made from certain sweet clover varieties such as white and yellow sweet clover can cause severe and often fatal hemorrhages in livestock such as cattle, sheep and goats.

“Unfortunately, proper harvesting can be difficult,” says Gerald Stokka, North Dakota State University Extension Service livestock stewardship specialist and veterinarian. “If cutting is delayed until full bloom, the large, high-moisture stems will take a longer time to dry than the leaves. This will increase leaf shatter and decrease quality. If baled in early maturity with increased moisture content, mold growth may develop.”

The problem with sweet clover is that it contains a high level of a unique, naturally occurring chemical known as coumarin. Mold causes coumarin to be converted to dicoumarol, which is a potent anticoagulant. Dicoumarol also interferes with the metabolism of vitamin K, which the body needs for blood coagulation.

That is a concern to producers because sweet clover is used as livestock feed. It grows in many annual pastures and can become abundant in years following good rainfall in the fall.

“Many of these symptoms may go unnoticed, and often extensive internal bruising is discovered after the animal has died,” Stokka says. “Dicoumarol also has been shown to cause reproductive disease in cattle.”

Newborn calves are more susceptible to sweet clover disease than older animals because the calves usually are deficient in vitamin K and unable to protect themselves from the toxin. In mature animals, toxicity usually occurs after they’ve consumed 20 to 30 milligrams of dicoumarol per kilogram of hay for several weeks.

Stokka recommends that producers remove sweet clover from their livestock’s diet at the first signs of toxicity. In severe cases, administering whole blood intravenously can resolve hemorrhages and anemia immediately. Administering injectable vitamin K1 also has been shown to be an effective treatment strategy.

The synthetic vitamin K3 is available in injectable and oral forms, allowing for easier treatment, but it has not been shown to be effective, Stokka says.

Replacing or blending moldy sweet clover with a high-quality forages will help avoid the effects of dicoumarol. Also, haylage or silage made from sweet clover is less likely to have coumarin convert to dicoumarol because anaerobic conditions necessary for proper ensiling are not conducive to mold growth.

“To be safe, producers should have their sweet clover hay tested to determine the dicoumarol content,” Stokka advises.

Other methods of reducing the risk of sweet clover disease include: