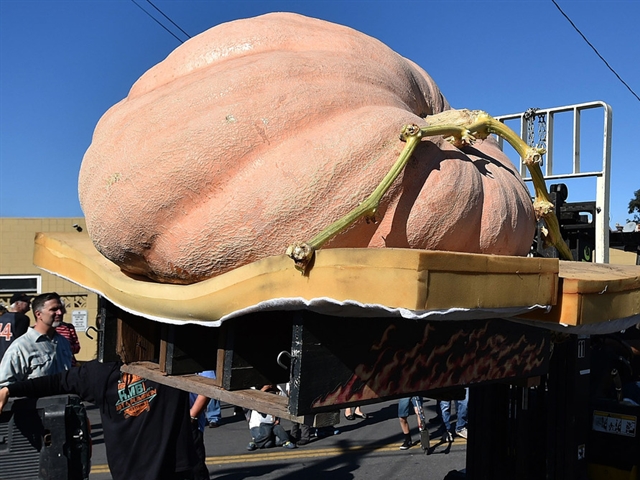 Since 1999, the Ackerman family of Illinois has been selling the round orange pumpkins that most Americans carve into decorative jack-o’-lanterns every Halloween. But in recent years, the gourds have been getting a lot weirder.

That’s by design. While plenty of customers still buy the traditional-looking pumpkins at this time of year, demand has surged for ones with different colors, shapes and deformities -- like all pink or white with red veins or covered in bulbous warts. The Ackermans now sell 160 different varieties, according to John Ackerman, who planted a few blue pumpkins on a whim 16 years ago hoping to expand the income from the livestock, corn and soybean operations that have been in his family since 1909.

"People would walk up and see that pumpkin and they’d say, ‘This is the ugliest thing I’ve ever seen,”’ Ackerman, 54, said by telephone from his 300-acre farm in Morton, Illinois, which includes 75 acres (30 hectares) of pumpkins. “And the next words they said were, ‘Please give me three of those!”’

Weird-looking or unusually big pumpkins fetch a hefty premium for growers, and seed companies like W. Atlee Burpee & Co. and Rispens Seeds Inc. have responded by developing hundreds of new varieties in recent years. The quirkier ones are winning a bigger share of the increasing market for decorative pumpkins in the U.S., said Mohammad Babadoost, a professor of plant pathology at the University of Illinois in Urbana.

Pumpkins "that are unique and different are what the consumers buy first," because most want their seasonal decorations to stand out, said Phil King, marketing communications manager at Rupp Seeds Inc. in Wauseon, Ohio. The company sells 78 different pumpkin-seed varieties, almost twice what it did two decades ago.

While the government doesn’t track sales of non-traditional pumpkins, production of all types has surged 31 percent since 2000 to 1.91 billion pounds in 2014, the U.S. Department of Agriculture estimates. Carved jack-o’-lanterns remain the most popular use of pumpkins, but they also end up in food like pies, breads, soups and even seasonal beers, the USDA said. Demand tends to surge during Halloween season, when the harvest is peaking in places like Illinois, the biggest grower at 57 percent of U.S. production.

At Bengtson’s Pumpkin Fest in Homer Glen, Illinois, non- traditional pumpkins sell for 59 cents a pound, 20 cents more than traditional orange ones. Grocers nationwide sold 39.5 million pounds of pumpkins last year at an average of $2.44 a pound, a price that was up 50 percent from 2011, according to data provided by Nielsen Perishables Group.

“The entertainment-pumpkin deal started 25 or 30 years ago, and it just keeps growing,” said Ross Rispens, the third- generation owner of Rispens Seeds Inc. in Beecher, Illinois. “People realized they will pay." The company, which has been selling seeds for 87 years, tries out new varieties every year. It now markets more than 75 different kinds of pumpkins, compared with six in 1978, he said.

When Burpee began as a seed company in 1881, the only pumpkin varieties it sold were for making pies. That began to change in the past decade, as it began breeding more ornamental types, said Chelsey Fields, vegetable product manager at Burpee in Warminster, Pennsylvania.

"The genetics of pumpkins include a lot of interesting shapes and colors,” said Peter Zuck, the vegetable-product manager at Johnny’s Selected Seeds in Winslow, Maine, which sells 51 varieties, up from 10 two decades ago. “Looking at the parents, you can’t predict what the offspring is going to look like. Sometimes it happens by accident. Breeding pumpkins is a kind of beauty contest. "