Put Pregnancy Checking Information to Use 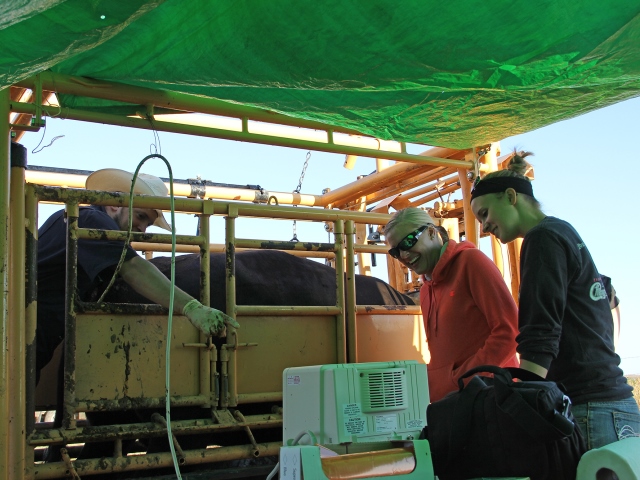 Checking whether cows are pregnant and culling the nonpregnant females before the winter feeding period can save producers 60 to 70 percent of their yearly beef cow maintenance expenses, according to North Dakota State University Extension Service livestock experts.

Once producers opt to pregnancy check, they need to decide when to do it and define their strategy for managing the females identified as nonpregnant, pregnant or needing to be culled due to temperament, or physical or conformational problems. Specific options include marketing and selling culls ahead of seasonal lows, putting cows on feed to target “white fat” cow markets, defining a calving season, sorting pregnant cows into management groups based on body condition and/or age, and grouping pregnant females into anticipated calving groups.

Early pregnancy checking and culling allows producers to take advantage of seasonal prices in cull cow markets. November is the highest volume month for cull cow marketing, and prices reflect that. Producers able to pregnancy check in August or September can realize greater prices for cows marketed ahead of the seasonal rush, Dahlen says.

The difference between selling in September and November has been about $7 per hundredweight, or $94.50 per female marketed. Early pregnancy checking allows producers to market open heifers at the same time as yearling cattle, resulting in greater prices than they would receive if pregnancy checking later in the year.

Producers need to take into account when marketing cows early that September also is ahead of typical weaning time for many producers.

“The calf obviously will be weaned if its dam is marketed, so producers must have a plan to sell or manage early weaned calves,” NDSU Extension livestock stewardship specialist and veterinarian Gerald Stokka says.

Rather than marketing immediately, producers can place cull cows on high-concentrate (feedlot) diets for 60 to 90 days to target “white fat” cow markets. “White fat” cows are fed grain for a period before they are sold, resulting in meat cuts with white fat.

Many nonpregnant cows also are thinner at pregnancy checking time, compared with their pregnant counterparts, resulting in favorable feed efficiency when placed on feed. Intake typically will be much greater for cull cows than traditional feedlot steers and heifers, but management can be similar.

Producers also should be very careful with diet forage and concentrate percentages if they frequently place new cull cows in pens. If they will accumulate additional cows at sales during a period of time, they should delay the transition onto final feedlot diets at least until an entire pen or group is in place.

In addition, producers should maintain consistent times for feed delivery to cows, and consider using growth-promoting technologies to improve returns, the specialists recommend.

Having defined breeding seasons can impact profitability by matching cattle to available resources, refining nutrient delivery to groups of cattle, concentrating labor resources during calving, and increasing the sales price of calves through lot size and uniformity.

Gathering bulls out of breeding pastures can be difficult, so rather than setting a defined breeding season by removing bulls, producers can define a set anticipated calving season based on information gathered at pregnancy checking time. Producers should work with their veterinarian to determine his or her comfort level in aging fetuses, and set a minimum age of pregnancy that matches the operation’s goals for the anticipated calving season.

Producers also should identify late-bred females that became pregnant after the cutoff data and consider marketing them as pregnant cows. Removing these late-bred cows from the herd will have a similar effect as removing the bulls after a defined breeding season. If pregnancy checking results reveal a large number of females that are late-bred, producers can compare the option of calving them later the following year with the option of calving fewer cows than desired.

Pregnancy checking also can serve as a time to body condition score cows and make grazing or feeding decisions based on those scores.

Considering age when grouping cows also can be beneficial to reduce the likelihood that dominant females will push young cows/heifers or older cows away from feed. In addition, removing open cows from pastures before cows are moved to winter feeding areas may give the remaining pregnant cows more access to feed and a greater chance to regain body condition.

Cows also can be sorted into anticipated calving groups based on findings from the pregnancy checking. The best way to accomplish this is through an early pregnancy diagnosis. With the proper records, females can be placed into groups based on expected calving day to help concentrate calving labor on groups of females with the highest likelihood of calving in the immediate future.

“Pregnancy checking can be a valuable strategy if the resultant information is used to make decisions that turn into action,” Dahlen says.