At 13.9 billion bushels, the corn crop estimate USDA published in August would be down 519 million bushels from last year’s crop. Yet, it was around 700 million bushels higher than traders anticipated. That’s a large miss that takes the wind out of bulls’ sails.

USDA’s August crop estimate was driven by higher acres and yield. After resurveying 13 states, USDA estimated planted corn at 90 million acres (down just 1.7 million acres from its June estimate) and harvested acreage at 82 million acres (down 1.6 million from June). Both estimates were well above what traders expected. In addition, USDA’s initial national average yield at 169.5 bu. per acre was up 3.5 bu. per acre from the July model-based projection.

But the supply-and-demand story is far from over. Anything but an extended growing season would be disastrous for supply. If the national average yield would decline the 3.5 bu. per acre USDA added from July to August, assuming acreage doesn’t change, it would shave about 300 million bushels off the crop. Not all that would come off carryover, but it shows how much movement could happen to supply.

Note: USDA’s August estimates were based primarily on farmer surveys and satellite imagery (not objective field samples by NASS). NASS will start field sampling in September and incorporate that data into its crop forecasts through the final estimate in January. 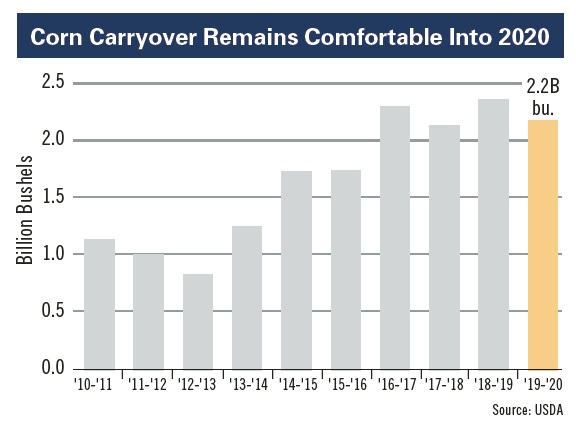 SOYBEAN WILD CARDS. USDA’s soybean crop estimate at 3.7 billion bushels would be down 864 million bushels from 2018’s record crop. The August forecast was 120 million bushels below what traders anticipated. After resurveying producers in 14 states, harvested acreage was cut 3.4 million acres from the June estimate to 75.9 million. USDA’s national average yield estimate at 48.5 bu. per acre was in line with its model-based projection from July.

The lateness of this year’s soybean crop creates a lot of questions for harvested acreage and yield. The wild card on the demand side is exports. USDA forecasts only a modest 75-million-bushel increase in exports as the trade war with China is expected to continue into the new-crop marketing year. Soybean crush is projected to be record-large in 2019/20. Based on how these wild cards play out, soybean ending stocks for 2019/20 could vary widely from USDA’s August forecasts. 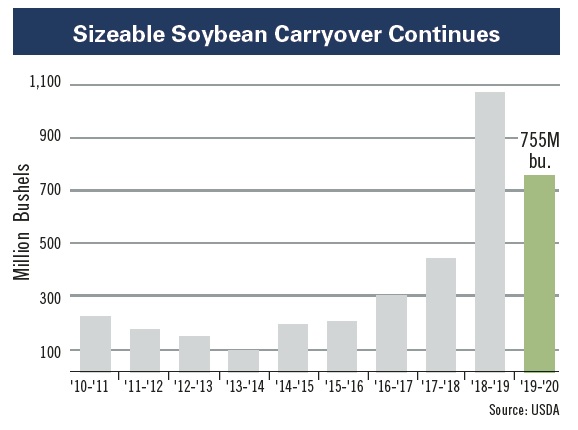