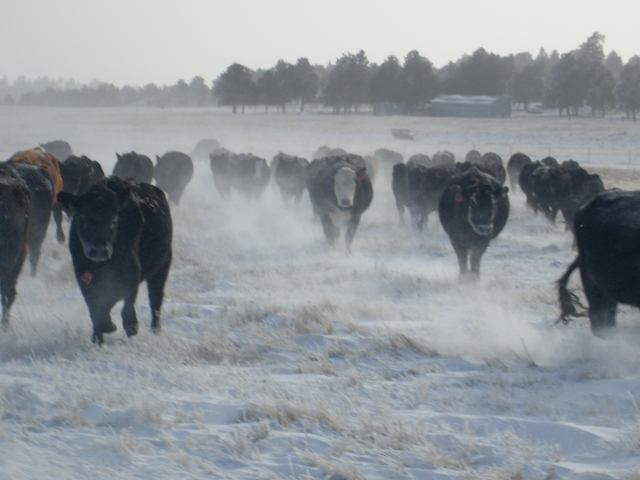 It’s been nearly a year since an early blizzard plowed into the northern Plains. The fierce wind and snow punished cattle in Nebraska, South Dakota and Wyoming. More than 40,000 head of livestock were lost in the fury.

At 3,200 feet, tucked in the rolling plains against a backdrop of breathtaking views, sits the Williams ranch. Myron and his son Monty have kept busy here for decades, but the scene looked quite different one year ago.

"When the wind blows, you better believe me. It’s going to," said Myron Williams of Wall, S.D.

In October 2013, the ranch was pelted with a 24-hour rainfall followed by 30 inches of snow, soaking and chilling the Williams’ cattle.

"No hair and no mommas. It was the worst case scenario I’d ever seen. We’ve had a lot of storms but not that kind of loss in this area," he said.

Snow reached the top of the bunks along the feedlot, sinking calves under. It forced the cold calves to huddle together, trying to keep warm.

"We couldn’t get out there with a tractor. The mud was too deep," Myron added.

The Williams say they lost over 100 head of cattle. Some were in the feedlot. Others were in the pasture.

When they could get to the pastures, cattle were found stuck in snow banks and mud. Some were still alive, some two weeks later.

"I finally got to where I could see some livestock and I couldn’t access them. I was going to spend all night digging," Monty said.

After 40 days of clean-up and months of healing, the mess is gone. As soon as the sales started, the Williams rebuilt fast.

"A lot of people didn’t have the capital to continue to do that. They’ve been waiting for disaster payments. At that time, I could pay for cows $1,200 to $1,400," Monty said.

Knowing relief would come at some point, they started rebuilding that month, hoping the market wouldn’t skyrocket too soon.

"Then it got so high we quit. Then bought heifer calves," said Myron.

Even for them, the process will last a while.

"We’re going to battle this the next five to 10 years," Monty said.

It wasn’t just resilience that saved them. Financial relief arrived in early winter, a new farm bill soon after.

"We would be in trouble to this day if we wouldn’t have had it. We had insurance and a government program," said Myron.

"There’s an unbelievable amount of generosity in this world," Myron said.

Today, walking into that pasture isn’t as painful.

"You’re pretty blue when the storm happens because you think you’re broke. It’s devastating. But there’s fires and tornadoes. I think we were lucky," Myron said.

They know the ranch tucked in between the Badlands and the Black Hills will bounce back. A seasonal hardship is now fading in the rearview.