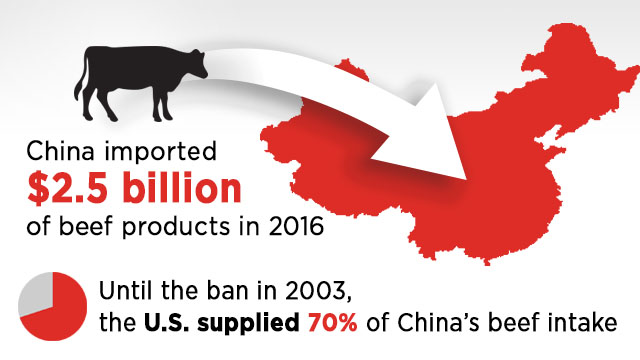 “China has tremendous potential for this industry, but it’s a long-term project,” says Derrell Peel, economist, Oklahoma State University. “We’ve got access and now we know the details. There are some restrictions in the short run that really limit the available supply. More importantly, now the market can start to work. Over time we’ll figure out what the restrictions are for specific products and those relations will develop.”

Cattlemen were quick to celebrate the major win—within hours of reopening Chinese markets to U.S. beef on June 12, steaks were on the way. On June 14, Greater Omaha Packing Company sent their first shipment of 40 boxes of ribeyes, tenderloins and New York strip steaks by air freight to a customer in Shanghai.

“We want to know how the process works,” Dan Jensen, Greater Omaha vice president of sales and marketing, told the Lincoln Journal Star. “This will be the first of many shipments.”

Beef exported to China must meet several qualifications, such as being derived from cattle born, raised and slaughtered in the U.S.; traceable to the farm of birth; and derived from cattle less than 30 months of age. China also bans the use of growth promotants, feed additives and chemical compounds, and will conduct residue testing at port of entry.

Product will need to be raised to meet these specifications, starting at the cow-calf level to move through the system, says Katelyn McCullock, economist, American Farm Bureau Federation. “Only a small proportion of commercial beef production would fit the current parameters surrounding this protocol. The premium attached to the Chinese market must warrant those changes."

“We know some U.S. beef has been getting into China unofficially for several years,” Peel says. This means packers might have an idea of what the demands of the process will be; however, it might change when it’s legitimate business, he says.

“We might see some significant numbers in the first months—merely as those unofficial supplies convert into legal flows. So we could see export numbers for China look relatively large and appear impressive,
but we have to check to see it’s not off-setting something that has been shipped through Hong Kong, Vietnam or other places,” Peel says.

China’s market halted in 2003 when the U.S. investigated a case of bovine spongiform encephalopathy (BSE) from an imported dairy cow. Up to that point, the U.S. was China’s largest supplier of beef. In 2016, China imported beef products (mostly from Australia) worth up to $2.5 billion.

“I think we’re talking about a multi-year process to really see the potential for this market,” Peel says. “We will see this market expand in 2017 and throughout 2018.”

“Right now, its going to cost more to get ready for this market and to get qualified, relative to the value of the products we are sending over there,” he adds. “But there is tremendous opportunity to grow this market. It just doesn’t happen immediately.”