Reed Canarygrass – Love it or Hate it 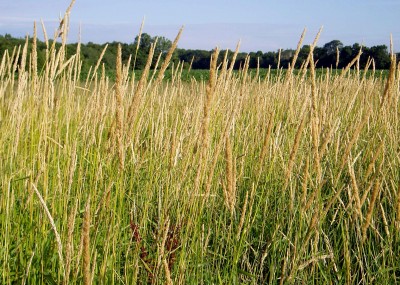 Reed canarygrass, Phalaris arundinacea, is a cool-season forage grass species used by Michigan farmers in certain situations. This grass does best in moist, cool climates. It prefers fertile, moist and swampy soils and is especially well-suited to areas along waterways that frequently overflow. Other forage grasses are better suited to both wet and dry mineral soils.

According to the 2013 Michigan Forage Variety Test Report, reed canarygrass is slow to establish, has a long stand life, is rated “good” on acidic soils and “excellent” on wet soils, has good drought, heat and cold tolerance, and is rated good for both pasture and hay production. It has a sod-forming root system with rhizomes and creates a very dense stand when established in a favorable location. It is most often found in areas that frequently flood, or along ditches, streams and riverbanks.

This plant is considered a native species by the Michigan Natural Features Inventory, although they note that “most Midwestern colonies thought to be escapes of cultivated and European forms” and that “the invasive character of some Phalaris populations may be the result of agronomic breeding for vigorous growth and drought tolerance.”

Reed canarygrass definitely has the capability of crowding out other plant species in a wet, swampy environment. For this reason, commercial seed sales of reed canarygrass for agricultural or other uses have been banned in some states, including Wisconsin. Native substitutes are being recommended for erosion control applications in some states. Some farmers in Michigan counties bordering Wisconsin have had to find new sources for reed canarygrass seed to replace their old sources in Wisconsin.

Older varieties of reed canarygrass contain high levels of alkaloids, making them less palatable to livestock than other forage grasses. Newer varieties, including Palaton and Venture, have low alkaloid content and are preferred where a reed canarygrass seeding is planned. A seeding rate of 6-8 pounds per acre for a pure stand and 3-5 pounds per acre in a forage mixture is recommended. Fall seedings generally are more successful because weed pressure is reduced.

What do Michigan farmers have to say about reed canarygrass? An informal poll was conducted during the Michigan State University Ag Expo farm show on July 22-23, 2014. Kim Cassida, Michigan State University Extension state forage specialist, established a forage demonstration plot at Ag Expo including reed canarygrass, along with several other grass and legume forage species. MSU Extension staff asked several farmers about their experience and opinions about reed canarygrass as they visited the demonstration plots. Responses ranged from “love it” to “hate it.”

Positive responses included the way reed canarygrass provides good grazing and hay opportunities when other pastures are suffering from drought, and how it makes good use of wetter sites that would otherwise be unproductive. It is very persistent, but didn’t spread outside the wet areas. When managed properly, these farmers felt that reed canarygrass feed quality was acceptable.

In 1966, MSU released an Extension publication called “Reed Canarygrass for wet lowland areas of Michigan,” authored by Carter M. Harrison and John F. Davis. The publication listed the advantages of reed canarygrass as:

Many of these points still apply today, but need to be tempered against changes in our understanding of environmental issues since 1966. Agricultural plant species with the potential to create undesirable environmental impacts should be considered carefully before including them in cropping or grazing systems. However, reed canarygrass, when properly established and managed in a farming situation still has a valuable niche on some farms.