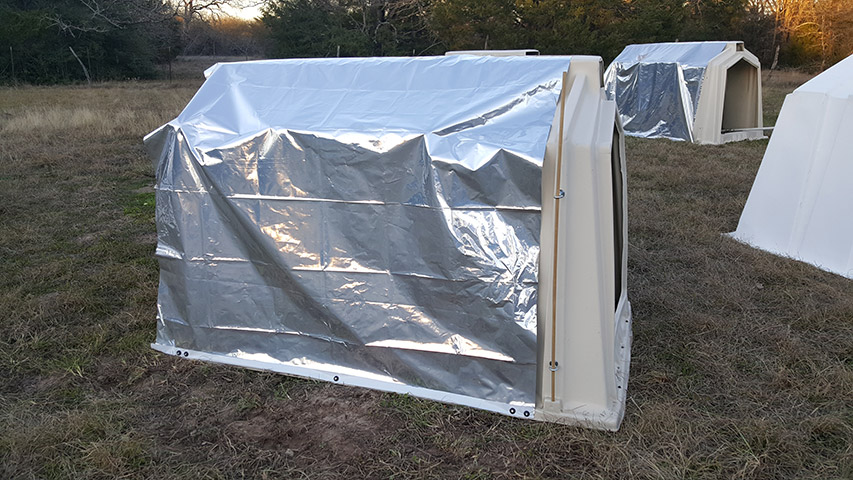 It might be winter where you are, but it’s never too soon to think summer, heat stress and baby calves in hutches.

Air temperatures inside calf hutches, particularly in hot southern climates, can reach over 105°F in the summer, late afternoon sun. While shade cloths and structures can provide some relief, they can disrupt breezes and reduce sun light that dries bedding and kills pathogens.

Ted Friend, a retired professor of animal science at Texas A&M, has come up with a low-cost, highly reflective cover that can be placed directly on hutches to reflect heat away. The covers, an aluminized low density polyethylene, significantly reduces both the air temperature in hutches and the radiant heat originating from the surfaces of the hutch heated by the sun that also increases heat load on calves.  Interior ceiling temperatures over 4 days were 16 degrees lower in hutches with reflective covers in a study in central Texas. Friend has also looked at calves’ rate of gain in hutches with and without the reflective covers in studies in the Texas Panhandle. He saw weight gain improvements ranging from 0.039 lb./day (3.1 lb. over 80 days) to nearly 0.1 lb./day (7.9 lb. over 80 days).

In an Arizona study, hutches with reflective covers were compared to control hutches, both of which had their back ends raised on cinder blocks to increase air flow through the hutches. Air temperatures in the hutches with the reflective covers were 3.9° lower, calves panted significantly less and there was a trend toward less medical treatments and higher weight gains.

For more information, go to coolcalfcovers.com.