Remove Risk From a Risky Business 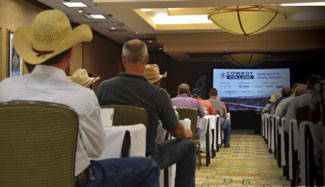 No matter how long you’ve been in the cattle industry, there is always something new to learn. From animal handling to health strategies to nutrition, beef production has plenty of room for innovations—and problems.

To mitigate those risks, more than 130 beef producers from 17 states gathered in Omaha, Neb., for the Beef Today Cowboy College on Sept. 9 and 10. The two-day educational program was designed specifically for feedlot cattle crews—processing teams, cowboy doctors and others involved in the day-to-day care and welfare of feedlot calves. Identifying and dealing with high-risk calves was the focus for the cattlemen in attendance.

Dan Thomson started off the event by discussing the  management of newly received cattle. Before cattle even arrive at the feedyard, they can often be grouped by low-risk or high-risk for disease:

“When we get into high-risk calves, the big thing is setting our expectations. It always blows my mind that we set the expectation that none of these are going to die; we’re going to save them all,” Thomson says.

Several changes can be made to feedyards to help prevent high-risk cattle from dying, such as altering the plane of nutrition or using different health protocols.

No matter how good an operation is at implementing these changes, however, there is likely to be some death loss. “That’s reality,” Thomson says. “We have to set realistic expectations.”

In setting those expectations, feeders need to determine what is normal. Looking at records from cattle fed from a particular region or type of calves can show variations in the number and type of cattle making it to the packer, but those differences are expected.

Changing the process is the best method to achieve better outcomes. Proper management during the first 45 days on feed for high-risk calves is critical. Tom Noffsinger outlined areas feedlots should target within that early window of feeding.

“We create a lot of our own problems,” he says.

Oftentimes, cattle are taken through the processing barn only to find out they were worked at the ranch. Cow-calf producers can reduce stress by castrating and weaning calves 30 to 45 days prior to leaving the farm.

Feedlot employees need to communicate with producers when new cattle are bought to determine what has been done to a calf, in an effort to reduce stress and the redundancies of treatment.

Feedlot crews also need to do a better job of working as a team, Noffsinger says.

“You have to understand each other and each other’s responsibilities,” he adds. “Everything is ‘we’ to accomplish this.”

He recommends having employees do different jobs at the feedyard, even if it is just for a day. This helps all employees get a grasp on how important each person’s role is to the overall success of feeding cattle.

Similarly, when learning something new while handling cattle, workers should be sure to teach others in the operation.

Use low-stress handling to manage and move cattle. Part of Noffsinger’s method of handling is “nothing in the hands stockmanship.” This means not using hot-shots, sorting sticks or paddles, unless the situation absolutely calls for it. For instance, when moving cattle in a muddy lot, it may be difficult for people and animals to move on foot, so a sorting stick could be handy to save steps.

“Every time you walk into a pen of cattle, it should be a positive experience for the animals and yourself. There are times you make a mistake, but if you do, fix it,” Noffsinger says.

Still, cattle health wrecks are likely to happen, says Kansas State’s Mike Apley. He detailed the timely and adequate use of antibiotics for treatment while making therapeutic choices.

Feeders can help prevent health wrecks by having a written protocol of the treatment plan. The plan should be developed with the aid of a veterinarian and readdressed at least every six months.

“The days of verbal protocols are gone,” Apley says. “We can’t afford not having written treatment protocols.”

A written protocol instructs feedlot crews to consider every health step they do and makes certain there is justification for the type of treatment. “It gives you a road map going forward. Anytime you build a road map of where you’re going to go on a trip, it forces you to plan,” Apley says.

Consistently applying the treatment protocols is the No. 1 concern—it isn’t optional.

Protocols need to have a defined ending point for treatment based on either successful response to treatment or the point where further treatment will be inhumane and/or unrewarding. For example, at a feedlot several years ago, Apley was asked to consult at a facility having a large number of calf health problems. In one instance, a calf was treated 28 times.

Apley had the sick cattle moved into separate pens and only allowed a maximum of three treatments per head. “If we needed to euthanize, we euthanized. Otherwise, we stopped. At the end of that week, a lot of the calves looked better,” he says.

The experience proved to be a lesson in how sick calves should be treated. “We’ve got to have a stopping point for treatment, and we have to agree where it is,” Apley says. “I don’t think that use of an antibiotic should be our permanent solution. It is effective, but our goal as an industry is to figure out a way to handle these cattle, so we avoid the need for antibiotic treatment.”

To watch AgDay and other video coverage of
the 2014 Cowboy College, visit www.BeefToday.com/Cowboy_College