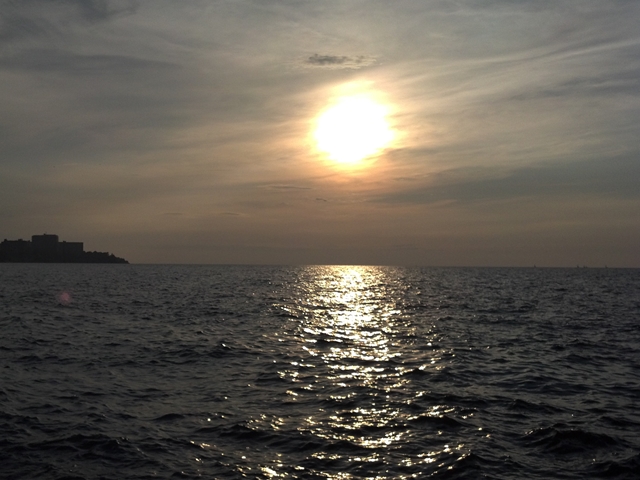 Cutting phosphorus runoff into Lake Erie enough to prevent harmful algae outbreaks would require sweeping changes on the region's farms that may include converting thousands of acres of cropland into grassland, scientists said in a report Tuesday.

The study released by the University of Michigan Water Center found current efforts to keep phosphorus, which is found in livestock manure and artificial fertilizers, on fields instead of flowing into the lake are falling drastically short of results needed to achieve a 40 percent drop in runoff — a target set by the U.S. and Canada in February.

Excessive levels of the nutrient are the leading cause of increasingly massive blooms, which in 2014 left more than 400,000 people in Toledo, Ohio, and southeastern Michigan unable to consume tap water for two days because the bacterial algae produce a toxin. Another bloom last year was the largest on record. Phosphorus also causes a "dead zone" in Lake Erie's central basin with so little oxygen that fish cannot survive.

Using computer modeling, a team of scientists tested different combinations of best-management practices that could bring the algae under control. Some are already in use, such as planting vegetation buffers between cultivated fields and waterways. Others include applying phosphorus-based fertilizers beneath the land's surface instead of on top, where it's more likely to wash away, and planting cover crops such as winter wheat.

Ohio and Michigan rely largely on voluntary compliance, but too few farmers are participating, the report found.

"Our results suggest that for most of the scenarios we tested, it will not be possible to achieve the new target nutrient loads without very significant, large-scale implementation of these agricultural practices," said Don Scavia, a University of Michigan ecologist who led the study.

The study focused on the Maumee River watershed, which includes 17 counties in northwestern Ohio and smaller sections of Michigan and Indiana. High phosphorus runoff from farms in that area is the primary cause of toxic algae in western Lake Erie, it said.

Policy alternatives described as "most promising" by Jay Martin of Ohio State University, the report's co-author, included widespread use of the best-management practices and conversion of some croplands to switchgrass or other grasses. One called for removing nearly 30,000 acres in the watershed from production. That's the equivalent of 6,300 farms, as the average farm in the area consists of 235 acres.

Jeff Reuter, past director of Ohio Sea Grant and a Lake Erie specialist who wasn't involved with the study, said some cropland is so overloaded with phosphorus that turning it into grassland or wetlands is the only way to stop runoff.

Such a requirement could drive some farms out of business, said Joe Cornely of the Ohio Farm Bureau Federation, who criticized the study for focusing only on the Maumee basin and agriculture instead of other phosphorus sources such as sewage treatment plants.

"Yes, agriculture's got some things we need to do," Cornely said. "But to give the idea that a single sector of our economy or a single geography is the only way to attack this ... runs the risk of raising unrealistic expectations among the public."

Government could pay subsidies to farmers who convert their land to protect water quality, Scavia said.

"This study is a strong affirmation that we can once again restore the health of Lake Erie, but it cannot be done with half-measures and a piecemeal approach," said Jack Schmitt, deputy director of the Michigan League of Conservation Voters.