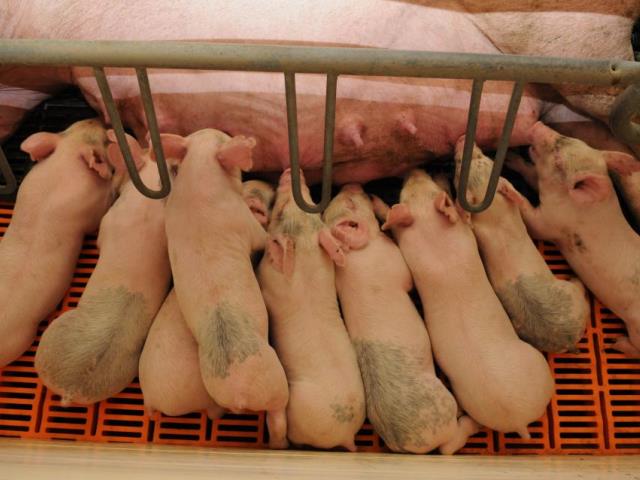 Kansas State University researchers are looking more closely at how piglets grow during their mother's pregnancy, and recent findings indicate greater hope for survival of the smallest in the litter.

Known as runts, the smallest-born pigs often get the short end when it comes to feeding and attention from their mother, two factors that diminish their chance to survive.

Runt pigs often weigh 1.1 kilograms — about 2 1/2 pounds — or less at birth. They may die on their own, or may be euthanized because of quality of life or welfare issues.

"Our goal is to have less of these low-weight pigs so that producers don't have to make those decisions," said John Gonzalez, an assistant professor of animal sciences and industry at Kansas State University.

The researchers are learning more about how piglets develop muscle in utero, or while they are in the mother's uterus. They have found that supplementing the mother's nutrition throughout gestation can help pigs develop the muscle fibers needed for sensible growth.

"The swine industry has helped mothers maximize the size of their litters, but often there are not enough nutrients to support all of those in the litter," Gonzalez said. "One of the things we've been researching is whether there are protein compounds that we can give to the mother so that the pigs are born heavier."

While in their mother's womb, pigs go through primary and secondary myogenesis, or times when they are developing muscle fibers. In effect, Gonzalez said, the animal is being programmed for future muscle growth.

When a fetus does not have adequate nutrition for maximum muscle growth, they form muscle fibers at a reduced rate, leading to smaller muscle fibers, less muscle stem cells and more fat cells.

"In effect, the pig is saying, 'I'm about to be born into an environment that's not very good, so I need to find ways to store energy,'" Gonzalez said. "That's why they get more fat cells.

"Our question moving forward is if you get these small pigs, how do you manage them to maximize the stem cells they do have. That's a large opportunity for the industry. We could potentially tell a producer, 'Alright you have a small pig, let's put them in a different program as far as nutrition and management techniques.'"

Gonzalez, a meat scientist, speculated that small pigs could eventually be marketed differently than what has been done in the past. For example, one of his graduate students is currently looking at differences in the tenderness of pork based on the size of pigs.

The research is funded by the Kansas Agricultural Experiment Station and industry partners.