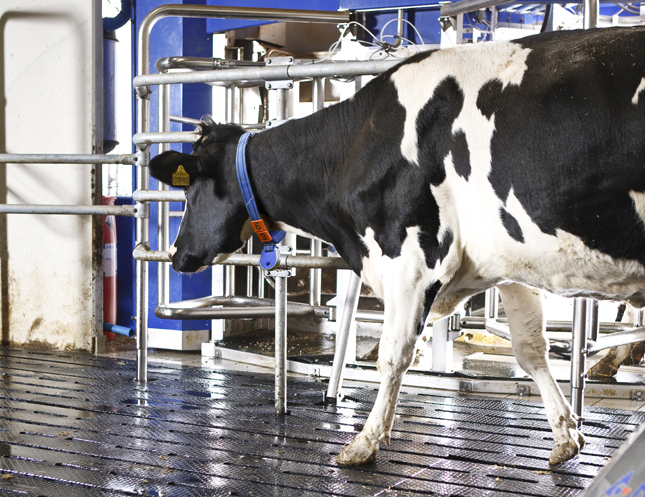 The University of Minnesota has compiled important facts and figures that document the management styles, cow behavior and impact of robotic milking systems.

Endres and University of Minnesota colleague Jim Salfer have been conducting a study with 52 RMS farms in Minnesota and Wisconsin, where RMS systems are becoming more common. The researchers have collected on-farm housing and management information as well as daily data from the RMS computers for every cow.

"Along with describing what is happening on the farms, these data allow us to investigate factors associated with productive parameters and make some inferences about cow preferences and behavior," said Endres during an Educational Seminar held Oct. 2 at World Dairy Expo.

Here is a summary of their findings:

• The average number of freestalls per pen is 78.

• Fifty-eight percent of the barns were new, and 42% were retrofitted RMS units in existing barns.

• Forty-seven percent of the farms had automatic alley scrapers, 21% had slatted floors, 6% had bedded packs, and 26% scraped alleys manually.

• Eighty-five percent of the farms had mechanical rotating cow brushes.

• Twenty-one percent of the farms had robotic feed pushers that pushed up the ration on a pre-determined schedule.

• The Partial Mixed Ration (PMR) in the guided-flow systems was higher in energy and lower in NDF than in free-flow systems.

• In free-flow herds, the PMR was balanced for milk production levels of 10-30 lb. less than the herd’s average production.

• In guided-flow herds, the PMR was balanced for 9-20 lb. less than the average milk output.

• The researchers’ observations indicate that the "milk first" guided system is superior to the "feed first" free-flow system.

• There were herds with greater than 90 lb. per cow per day average with both free-flow and guided-flow systems.

You can reach Endres at [email protected].