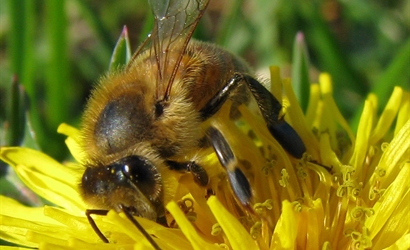 Varroa mites are a major factor in honeybee decline. Untreated, they can destroy an entire colony of bees in just two years, and they also have the ability to build up resistance to synthetic miticides over time.

Now, a study from Chinese university Xi’an Jiaotong-Liverpool shows real potential for a plant-based miticide that prevent mites from locating bee larvae and attaching to them.

“The miticides activate a sensory protein found on the mites’ front legs, which prevents mites from finding their honeybee hosts,” says researcher Tatsuhiko Kadowaki. “Several plant-derived miticides activated the protein but had no negative effect on honeybees.”

Kadowaki says his team hopes to develop scalable solutions for this problem.

“Modern apiaries have lots of hives, and they can’t sue the same method we use, so it’s better to have an easier way to apply the compound into the hive,” he says. “That would be the next step.”

Kadowaki also says he is skeptical of claims that neonicotinoid pesticides, rather than the Varroa mites, are the main cause of wintertime losses.

According to USDA, winter bee losses have averaged 28.7% during the past nine years. Summer losses exceeded winter losses for the first time last year.

"The winter loss numbers are more hopeful especially combined with the fact that we have not seen much sign of CCD for several years, but such high colony losses in the summer and year-round remain very troubling," said USDA senior entomologist Jeff Pettis. “If beekeepers are going to meet the growing demand for pollination services, researchers need to find better answers to the host of stresses that lead to both winter and summer colony losses.”