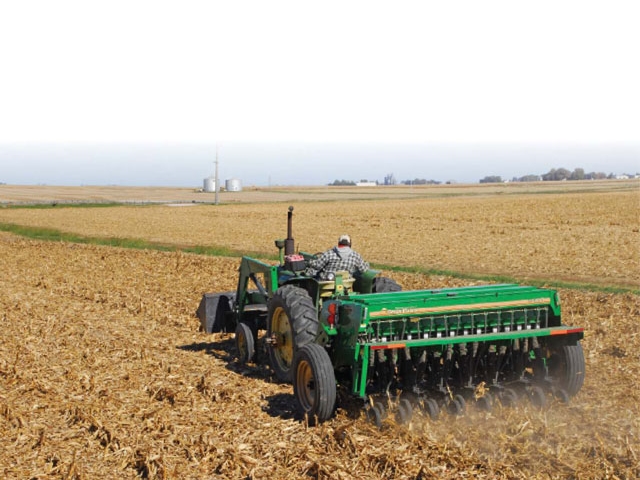 In 2015, some corn was harvested early to help ensure a cover crop of cereal rye would be successful. The impact of the cover on soil health and soybean yield was analyzed after harvest.
( Darrell Smith )

After rapid gains from vertical tillage, pH and fertility, the improvement pace slows down

Another year of results from a long-term comparison of healthy and unhealthy soil in central Illinois confirms the trend:

This past year’s results provided more good news—but the improvements were less dramatic than Farm Journal Field Agronomist Ken Ferrie, who is conducting the study, had hoped. The 2016 results showed, in some situations, even small soil health improvements from a single year of cover cropping might impact yield.

The study involves two farms about a mile apart—Farm A and Farm B. Both farms primarily contain two types of soil. One is a lighter silt loam, with about 3% organic matter content and a cation exchange capacity of 15 to 16. The other is a heavier silty clay loam. The organic matter content of that soil is 4% or more, and the cation exchange capacity is 20 to 25. If both soils were in perfect health, the silty clay loam would always outyield the silt loam because it has higher natural fertility and water-holding capacity.

The soil on Farm A has always been well-cared-for and healthy, but Farm B had been abused for 30 years, resulting in unhealthy soil. The practices used on both farms were similar except the operator of Farm A no-tilled. The operator of Farm B disked soybean stubble before planting corn, which destroyed soil structure and left an impermeable compaction layer.

The soil on Farm B also had become very acid. Because of these factors, the unhealthy soil on Farm B had more erosion, slower decomposition of residue and poor water infiltration.

In 2011, the new operator of Farm B set out to restore its soil health. He used vertical tillage to remove sudden density changes and compaction. He also aggressively applied lime to build up soil pH. Ferrie calls that “shooting the slow rabbits first” because these changes are the easiest to make and they produce quick improvements in soil health and yield.

“The vertical tillage used to fix physical problems helped incorporate some of the lime into the soil profile,” Ferrie says. “As we got soil pH somewhat tamed, the operator moved back to no-till, which he prefers. Since we were no longer incorporating lime, we had to reduce the amount applied and apply it more often.”

On the fertility side, everything involves the 4Rs—right product, right rate, right time and right place. “We have implemented variable-rate fertility, including applying some with the planter and sidedressing some of the nitrogen,” Ferrie notes.

Restoring soil health is complicated because the physical, chemical and biological aspects are interrelated. For example, the acid soil required high rates of lime, but you can’t add lime without tying up some phosphorus, Ferrie says. “Much of nutrient variability is controlled by soil microorganisms, the biological aspect of soil health.”

Now comes the hard part: continuing to improve the chemical and biological aspects of Farm B’s soil health. “Because the soil was acid for so long, and subjected to too much tillage, much of Farm B’s soil structure has been destroyed,” Ferrie says. “We can’t fix structure with a single treatment—although the lime we’ve applied helped because the calcium flocculates clay particles (while the carbonate corrects acidity).”

Poor structure causes soil particles to run together and seal. That leads to erosion and surface crusting, which causes stand problems.

“While corn’s grassy roots might help build soil structure, the soybeans in Farm B’s rotation don’t help much,” Ferrie says. “We realized we had to add wheat or a grass cover crop to the rotation for continued improvement.”

The farmer chose a grass cover crop. Flying annual ryegrass seed into soybeans in 2014 sounded promising; but, for reasons not fully understood, the cover crop failed to establish.

In fall 2015, the farmer harvested some of the corn early (4% more moisture than the rest of the field) and drilled cereal rye into the stalks. “The timely seeding produced a good stand,” Ferrie says. In spring 2016, they no-tilled soybeans into the cereal rye.

“Water-soluble phosphorus is a pretty good indicator of biological health,” Ferrie says. “The increase from 1 ppm to 2 ppm at the first location is significant.”

Aggregate stability also improved under the cover crop. But Cornell University’s Comprehensive Assessment of Soil Health scores both areas under 20, on a scale of 100, which is considered very low. In contrast, Farm A’s health was rated 80. (See table below.)

The 2016 yield increase was not enough to pay for the cost of the cover crop (drying the early harvested corn, planting the cover crop and terminating it in the spring), Ferrie notes. “But at least it wasn’t a yield drag,” he adds.

A cereal rye cover crop was seeded in fall 2016. This spring, the operator will strip-till corn into the cover crop.

“We hope to keep the ball rolling, in terms of soil health improvement,” Ferrie says. “This past year’s results were encouraging but also disheartening because soil health is not improving as fast as I had hoped. Still, we proved we could make the farm profitable in just a few years.”

Building on the Systems Approach, the Soil Health series details the chemical, physical and biological components of soil and how to give your crop a fighting chance. To learn more about this multiyear effort to nurture sick soil back to health, visit www.FarmJournal.com/soil_health