Rise of the Robot Tractors 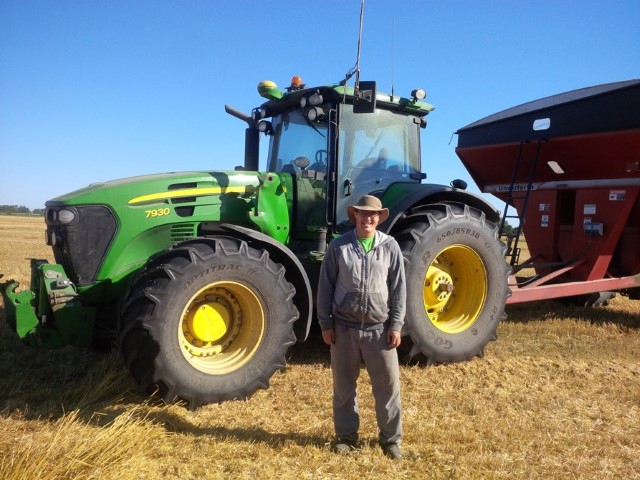 Ghost in the machine. A John Deere 7930 tractor rumbles across a canola field, buggy in tow, and eases alongside a rolling combine to collect grain. Speed, distance, and timing are synced in a farming machinery version of a harvest mating dance. Except this is no ordinary two-step. The box is empty. There is no wheelman in the tractor cab.

What does it take to make a robot tractor? A batch of free software, some drone parts, a tablet computer, and one curious farmer to cobble the bits together. Forget theory and gimmicks, robots are already operating on farmland. Matt Reimer’s remote control 7930 is proof in the dirt. Working in his Killarney, Manitoba, shop with computer and hammer, Reimer, 30, has kicked open the door for autonomy in agriculture. He’s done it on a shoestring budget and left a paper trail for others to follow. Rise of the machines is rather the rise of the open-sourced farmer.

Going back almost a decade, Reimer had heard and read of ag machinery manufacturers working on autonomous vehicles, but wondered why a remotely managed tractor and grain cart weren’t available. “Think about the way we’ve always done it. Once the guy with the grain cart is beneath the combine auger, he sets the auto steer and tells the tractor to drive straight. It’s relatively simple. There wasn’t anything on the market and I thought, ‘Why not go for it myself?’”

In 2014, the third-generation Canadian producer opened a Christmas card with $200 tucked inside from his parents. Any other year, the money would have gone toward bills or groceries, but Reimer indulged in a bit of fun: He went online and shopped for a remote control airplane. He stumbled across Pixhawk, a versatile autopilot system, and his excitement jumped the track, straight to his farm. If Pixhawk ran an airplane, why not a tractor?

Pixhawk included a radio set for communication between automated vehicle and tablet. It also contained navigational algorithms. The operator simply tells a vehicle to move to particular GPS coordinates. No understanding of math or programming required. Pared down, Reimer’s challenge centered on hooking Pixhawk to a tractor. He spent the winter of 2014-2015 trying to make it work, but set it aside as the growing season approached.

“One of my friends asked if I’d given up on the stupid idea,” Reimer says. “That comment spurred me and I got it back out and had it finished a few months later.”

Essentially, Reimer connected Pixhawk with servo motors that physically moved and controlled the tractor cab. His driverless system was ready for the 2015 harvest. When Reimer was ready to unload grain, he pushed one button on a tablet to call the tractor and grain cart. Using GPS locations on a loop, Pixhawk made continuous calculations and the tractor followed the data trail. After unloading, Reimer hit the tablet button again and the tractor moved off at an idle and waited until the next dump.

Range of communication varies according to terrain. The system doesn’t technically require line of sight, but with no vision capabilities, the tractor arrives on a straight line once called. Reimer custom harvested in 2015 on a flat, mile-long field and had no problem with communications. All said, Reimer’s automation system cost $8,000 through a trial and error of discarded parts. However, he says the returns will mount over time.

“It can save me $5,000 per year for a tractor driver depending on pay and harvest length, but the real savings come because the tractor driver now is doing other things," he says. "Swathing ahead of the combine; harrowing behind the combine; going for fuel and parts; and more jobs to keep an operation running well. We had one of our smoothest harvests ever in 2015.” 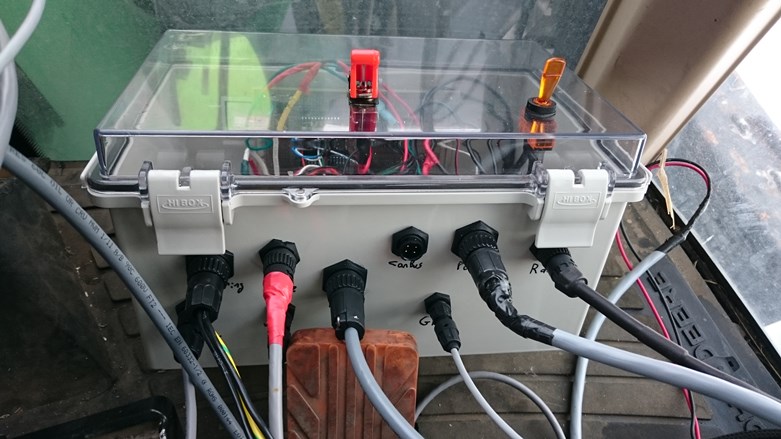 Since the 2015 harvest, Reimer has further improved his system, replacing the servos with arduinos – embedded computers. At the tractor control panel, he cut the wires and ran them into the arduinos, and then back to the controls. The arduinos pass along the automation signal. When driving in manual mode, the tractor runs normally, but the arduinos take over at the flip of a switch, allowing Pixhawk to guide the vehicle to given GPS coordinates. The arduinos have been a revelation.

“I’m always telling farmers how useful arduinos can be to an operation. Put sensor input in and based on the input, turn a switch on and off. Getting that far doesn’t take much effort or skill. It’s all online and even gets taught to elementary school kids,” Reimer says.

Arduinos are now part of Reimer’s farm toolbox for small tasks such as automatically monitoring tank levels and shutting off pumps once a tank fills.

“It’s a cheap and easy way to do it yourself,” he explains. “I recommend farmers pick one up in the winter and get familiar with the simple tech. Arduinos have become a new, useful tool around my place.”

All of Reimer’s work is open sourced and documented on diydrones.com, a website typically focused on remote control airplanes and cars. He posted videos on the site from start to finish, intent on enabling others to follow his progress and learn from his efforts.

“I did it so more farmers will get involved and also share their progress," he says. "It’s the ethical thing to do. I want other guys to see what I’ve done and do it better.”

As for objections from manufacturers, Reimer hasn’t faced any opposition. He has built physical devices and rerouted wires, but not altered John Deere's software.

“I haven’t messed with their software," he says. "I’d love it if they would open source their software and then we could really do some neat things.”

Kevin Monk, vice president of global marketing for AgJunction, a provider of precision steering and control solutions for agriculture, expects to see more autonomous farmer-built solutions in the near future. He says the required innovations are technically feasible and low-hanging incentives are drawing in producers with the competency to create automation systems through farmyard tinkering. In addition, Monk believes farmer-built innovations may push commercial solutions to market.

“I hope it will drive OEMs (original equipment manufacturers) to adopt these solutions quicker," he says. "Supervised autonomy will greatly disrupt the way we currently farm and the business for agriculture equipment as it is today. I believe that as solutions offered by individuals gain traction in the market, OEMs will be driven to provide these types of solutions.”

Monk says efforts by Reimer and others will lead to bigger commercial solutions.

“In the early 1990s, there were several farmers and engineers developing yield monitors," he says. "Yield monitor innovations started with individuals tinkering and then offering some of their products to nearby farmers. That was before yield monitors became standard in combines. I see the same thing happening with some of these supervised autonomous solutions."

Reimer’s tractor innovations have led to Reimer Robotics, a side business focused on automation in grain bin monitoring. He builds and installs bin monitors that wirelessly relay temperature and grain data.

“I’m still developing and improving the autonomous robot tractor, but it turns out people are very interested in remote bin monitoring as well and it’s become my near-term focus,” he says.

On Canada's prairie soil, Reimer farms a 2,500-acre mix of spring wheat and canola. At fall harvest in 2016, his combine once again will be shadowed by a tractor with an empty box, the result of Reimer’s hard work and curiosity driven by the need to improve.

“I’m no different from other farmers because we all work hard," he says. "I just hope other guys pick up on what I’m doing and make improvements on what I’ve missed.”