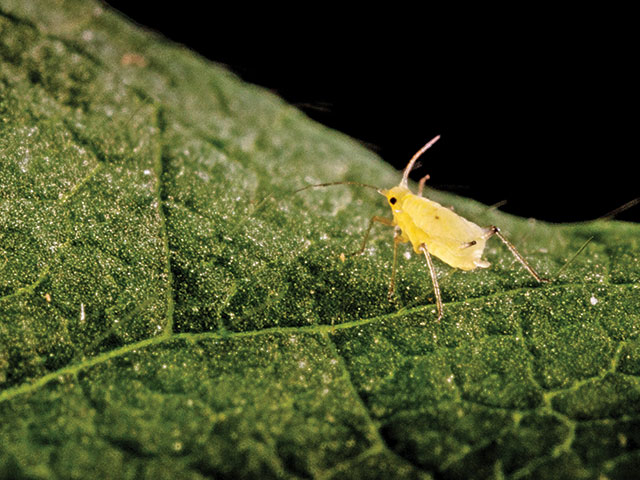 Ag technology is once again on the cusp of bringing benchmark change to farmland, and ribonucleic acid interference (RNAi) is at the tip of the spearpoint. Disease, drought, pests and much more are fair game for RNAi’s unprecedented accuracy.

A research breakthrough is enabling scientists to save tremendous time in physically delivering RNAi to insects in lab environments. Instead of laboriously injecting tiny pests the size of pollen grains with glass needles and hoping RNAi hits the mark, Allison Hansen is spraying pests with a nebulizer. Simply, she’s hosing down soybean aphids with RNAi-laden aerosol mist. The difference for agriculture is a major savings of time and dollars.

RNAi is a covert operator: It slips in, temporarily shuts down a gene and is gone. Got a pest flare-up in corn or soybeans? RNAi targeted to the given pest can flick a gene switch and shut down digestive tract function. Adios to feeding time. There is an RNAi door for every facet of crop production, from flavor and plant growth to pests and weed control—researchers just need to find the individual keys.

Hansen, an entomology professor with the University of Illinois, delivered a mist of bcat (a metabolism gene) RNA to soybean aphids that lowered body weight. “Maybe silencing the bcat gene caused them to starve. We’ve disrupted something and it’s definitely having an effect,” she says.

The invasive soybean aphid was first detected in the U.S. in 2000. The sap-sucking pest can hammer soybean yield by stunting growth and vectoring disease. It has significant presence in the Upper Midwest and can cost U.S. agriculture up to $2.4 billion when left untreated, according to a report in the Journal of Integrated Pest Management.

A team led by Ohio State University Extension entomologist Andy Michel sequenced the complete soybean aphid genome this year, describing roughly 20,000 genes in approximately a year. (The soybean aphid has the smallest known aphid genome to date.) Generating the data was relatively quick, but assembling the pieces again for analysis took the majority of the time. Genomic sequencing continues to drop in price, but it remains an expensive prospect, according to Michel.

“The genome only tells us what the genes are and where differences may exist among aphid individuals and populations,” he says. “It does not tell us what these genes do, if the differences in sequence are important or which genes are important. For this we need to perform detailed experiments and use tools like RNAi to silence genes to understand their function.”

Hansen reverse engineers the genome to uncover the purpose of particular aphid genes, and then uses RNAi to interfere with virus vectoring or feeding. “We can hypothesize what a particular gene does, and then spray RNAi and observe the phenotype to test our hypothesis,” Hansen says. “Ag companies then can develop technology to target the gene according to crop and insect.”

Though still in its seminal stages, Hansen says, RNAi is a long-term affordable solution.

Tags:
$100 Ideas
Analyst: June PPD "Blowing the Doors Off Anything We've Seen Before"
Retrograde Motion
FMC Corporation Partners with Nutrien Ag Solutions to Deploy Arc
A Look at USDA’s Farmers to Families Boxes at the Food Pantry
Jerry Gulke: Will Weather Set the Next Trend?