Building trust in food begins with empowering farmers through one of the largest and most diverse conservation- and sustainability-focused public-private partnerships in our nation’s history: America’s Conservation Ag Movement. To find the latest news and resources related to the Movement, visit AgWeb.com/ACAM.

Just barely off the starting line of his farming career in 2012, Russell Hedrick stared at a fork in the road, a precarious split between profit and yield. The path to profit beckoned, while the immediate lure of yield carried heavyweight appeal and turned the young man’s head—almost. At 28, the first-generation producer picked the path less traveled: “I was like nearly any other young guy, convinced I could hit those big yield numbers, but I made the choice to go after profitability over everything else.”

Survival for a first-generation farmer means seizing opportunity by the throat, squeezing the pennies from every dollar, and often, keeping a finger in a diverse row of pies. With an eye on soil health and regenerative practices, Hedrick focuses on input reduction, and alternative market access through specialty crops directly marketed to consumers. In addition to 1,000 acres of row crops and pasture-raised livestock, as well as helming Southern Seeds and Feeds, Hedrick is the co-founder of New Era Hauling and Heritage Ground, and is a partner with Foothills Distillery—stellar output from a former fireman with almost no agricultural background.

Growing up in the shadow of his grandfather, Hedrick watched Robert Richard work a factory job and still find time to tend 10-15 cows and cut a patch of hay. The tiny window into agriculture provided by his grandfather set Hedrick on a circuitous life path, and he pinned slim hopes on farming, but in order for hope to translate into reality, Hedrick spent 10 years working two separate firefighter jobs, saving money and waiting for opportunity to ripen. In 2012, he made his mark, buying used equipment for use on 30 precious acres outside Hickory, N.C., in Catawba County.

Only seven years later, JRH Grain Farms operates on 1,000 acres of non-GMO corn (heirloom open-pollinated varieties) and non-GMO soybeans, along with barley, oats, triticale and white wheat. “We grow corn for Foothills Distillery, and it produces Seventeen Twelve Spirits, the first North Carolina bourbon since prohibition, and we also make moonshine,” Hedrick explains. “We supply other distilleries with grain, like Old Nick Williams, and we grind our varieties into grits or cornmeal, and ship everywhere. We also grow seed stock for other farmers or work with malt houses, like Sierra Nevada Brewing Co. in Asheville, to supply them with grain for beer production.” 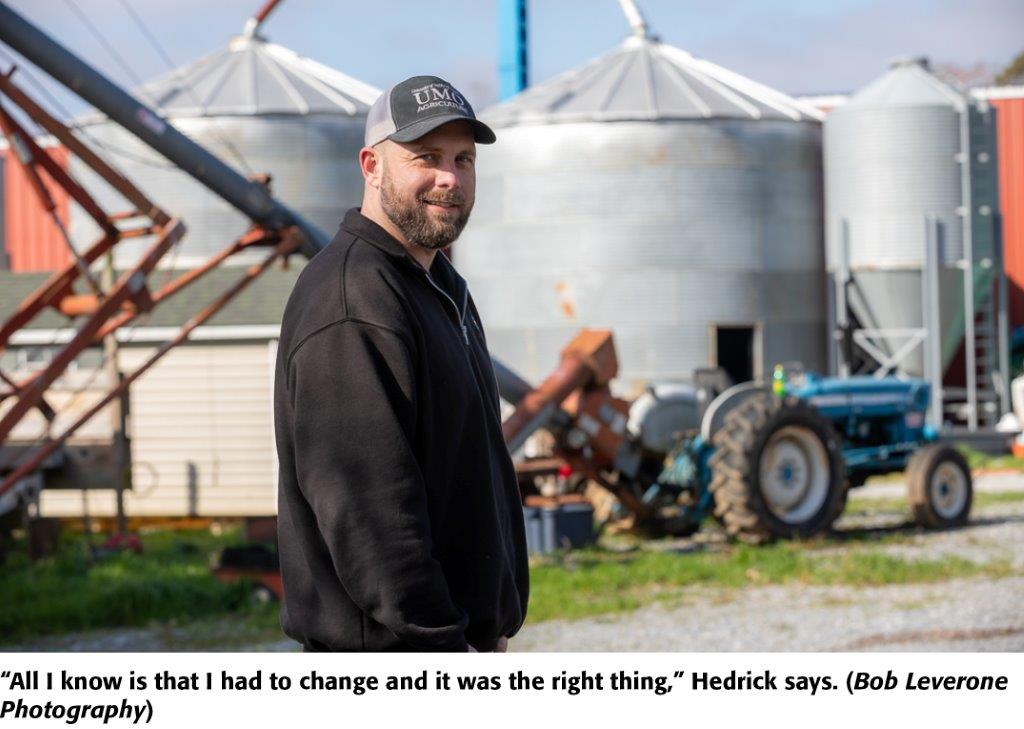 Gently rolling hills make up most of Hedrick’s topography, and his ground is classic foothill country in western North Carolina, nestled between the Appalachian Mountains and the Piedmont Plateau. He plants into a tricky soil composed of tight, red clay—both a boon and nightmare for farming, depending on the weather. Hedrick’s mercurial soil, and its propensity for erosion, played a massive role in shaping his profit-based path.

“When I started farming, I used to watch yield contests or read articles about big results, and I was captivated by the people who get huge bushels like Kip Cullers and Randy Dowdy and do an unbelievable job in breaking world records. I told myself, ‘I can do that and hit those same yields.’”

“At first, yield was the only thing on my mind. I could put out the most fertilizer, spray the most chemicals, and have the cleanest fields. That was farming,” Hedrick continues. “At the same time, I was watching my soil erode with winter rain. I started looking at regenerative agriculture and soil health because of my initial problem with erosion, and then I learned about a ton of associated benefits.”

“It was sheer luck that I met the right people at the right time when I started farming. Well, it was really more like grace,” he says.

Out of the gate, one of the first key voices to cross Hedrick’s path was NRCS’ Lee Holcomb, assistant state conservationist for field operations in North Carolina. Looking back, Holcomb recalls Hedrick as a young farmer eager to learn: “First, Russell didn’t have a ‘the way we’ve always done it’ mindset. Second, he paid extreme attention to detail. Third, he was a risk-taker and not afraid to fail. And fourth, he was really outgoing and the kind of guy capable of meeting a lot of people and leaning on experts.”

Initially, Holcomb and Hedrick talked cover crops and soil health: “Russell devoured the information, and as it turns out, he did some serious studying on it,” Holcomb says. “I asked him if he knew about Ray Archuleta, and it was another step in his learning.” 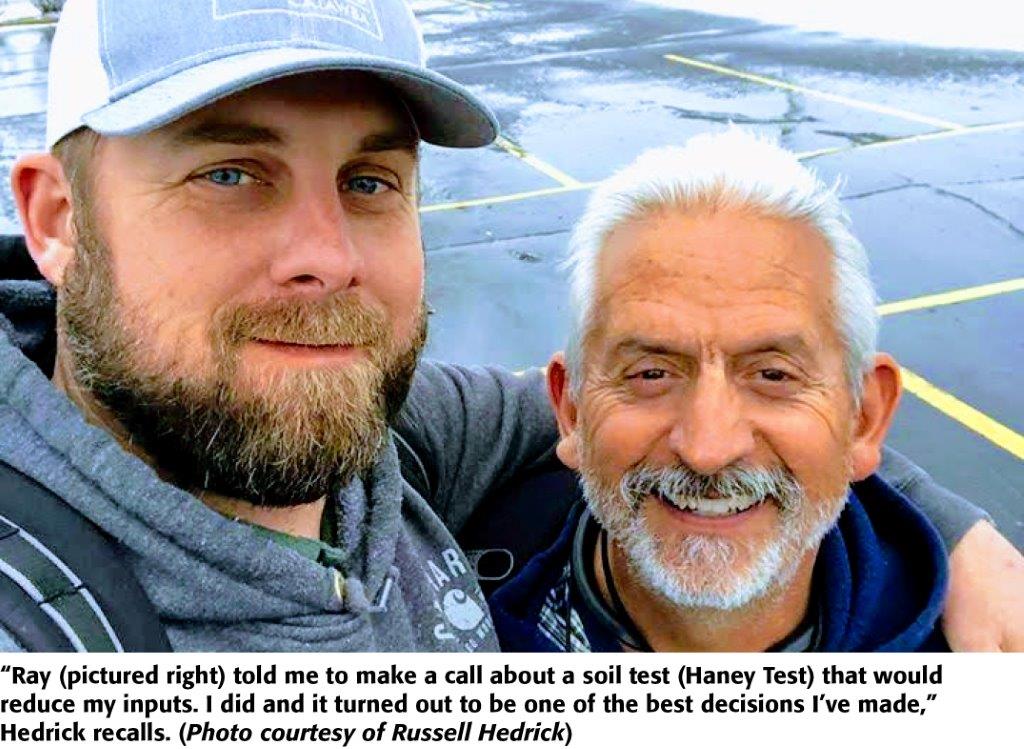 Soon after encountering Holcomb, Hedrick met Archuleta, a soil health proponent and conservation agronomist at the NRCS East National Technology Center, in Greensboro, and received pointed advice. “Ray told me to make a call about a soil test (Haney Test) that would reduce my inputs. I did and it turned out to be one of the best decisions I’ve made,” Hedrick recalls. (In 2017, Archuleta retired from NRCS and founded Understanding Ag, LLC, and Soil Health Academy, LLC.)

Developed by Rick Haney of USDA-ARS in Temple, Texas, the Haney Test uses a unique method to determine which nutrients are available to soil microbes. “I went to the lab and watched them run the test. Rick uses water and H3A—an extract of the acids made in the roots of my plants. Basically, the Haney Test measured what my farm sees in a way the other soil tests can’t. The results have been outstanding for us.”

Overall, Hedrick estimates a 70-80% drop in input costs—a reduction he attributes partially to the Haney Test. “Along with soil health practices, we’ve slashed costs and the biggest is nitrogen. There are huge pools of nitrogen in organic form that don’t show up on traditional nitrate tests, and plants can take up that natural nitrogen far more efficiently than synthetic nitrogen, but we haven’t even been looking for that in traditional lab tests,” Hedrick contends. “There are reserves of other free nutrients because of soil biology, but nobody is looking.”

“Just because the Haney Test is different and new shouldn’t make a bit of difference to anyone. What matters is whether it works, and I’ll tell anyone the savings on my land are easy to identify.” 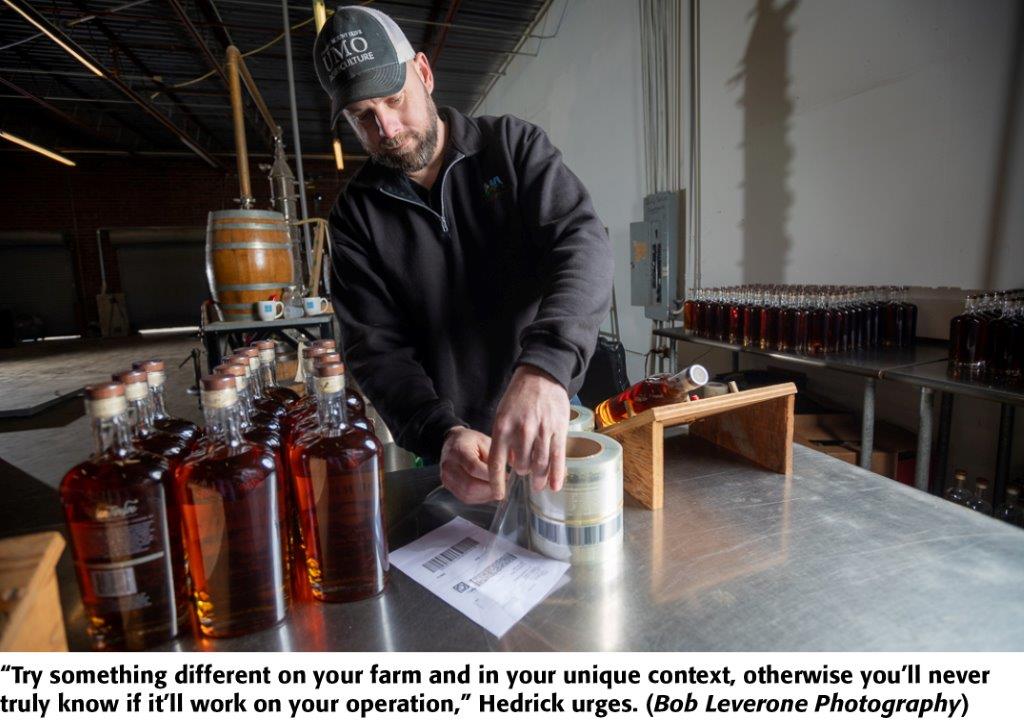 In 2018, Hedrick reduced farm-wide fertilizer applications by $91,118. Specific totals, according to Hedrick: $34,343 on nitrogen, $22,600 on phosphorus, and $14,375 on potassium. The tally in 2018 was not anomalous, Hedrick insists, but part of a pattern of diminished inputs. Further, he crosschecked the Haney Test, and for five consecutive years, pulled soil samples and sent the material to three different testing sites.

“We pull a standard Melich soil sample with a state lab and private lab, and send the same to Rick Haney’s lab. We take what a state agronomist and private agronomist recommend, and those two are usually the same or very close,” Hedrick says. “Then we look at what Rick recommends and therein is the difference. It’s easy for us to see how much we’re saving with Rick versus conventional testing.”

And has the input-saving mentality and reduced fertilizer applications affected yield? “We’ve got strong crops,” Hedrick contends. “On corn, we’re about 30-40 bushels over the county average.”

Hedrick is 100% no till, but he doesn’t take a golden-calf approach. With the persistent threat of hurricanes and tough storms, the potential for water-logged areas is a reality: “We fix rutted places like everybody else, but we don’t till the whole field, just the bad spots. It ain’t like the sun just shines on our land.”

Perfection in any farming system is a pipe dream, Hedrick insists, and he cites pasture-raised livestock (beef and pork) as an example. “No system is anywhere near perfect in farming. No way. Last year, we had almost 100” of rain, and that dictates bale-raising in pens, otherwise having our ground torn up. It’s not what we want to do, but we’re subject to weather like everyone else.” 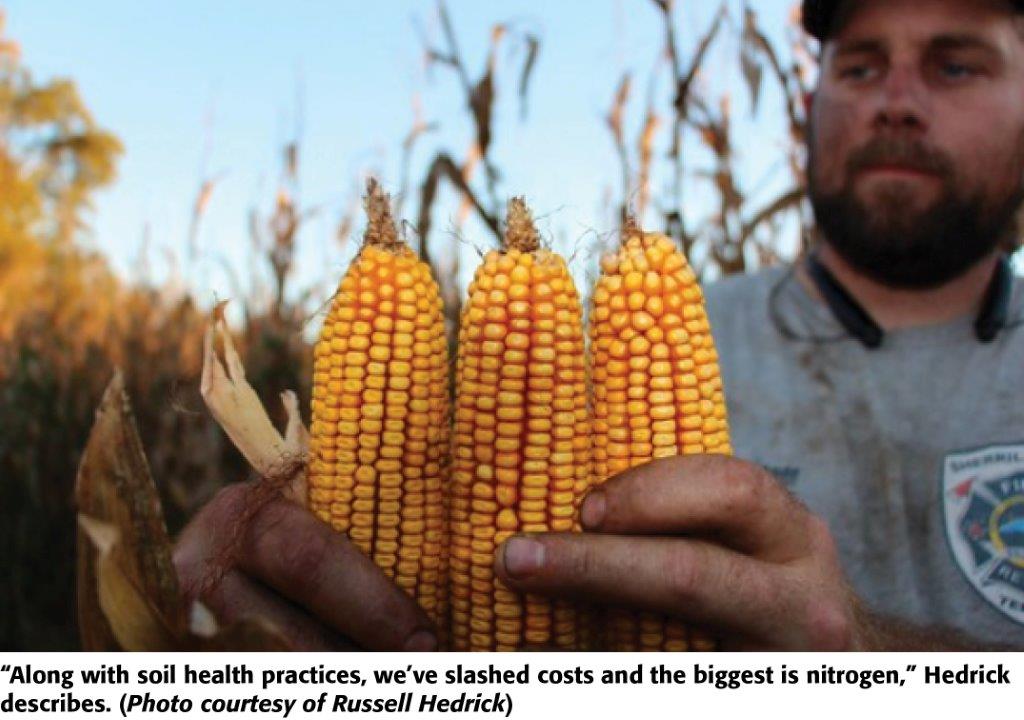 Hedrick plants cover crops on nearly 100% of his acreage, with a mix devised by Holcomb, including cereal rye, triticale, oats, crimson clover and winter peas. Beyond soil biology and erosion control, the covers have a major stifling effect on Hedrick’s general weed populations, including the three most detrimental weeds on his ground: Palmer amaranth, marestail and sicklepod.

For four consecutive years, weed suppression, directly attributable to cover crops, has enabled Hedrick to eliminate post herbicide sprays on 90% of his corn and soybean acreage. In 2018, he used no post sprays on 500 acres of corn and 400 acres of soybeans—a total chemical savings of $19,800. “We still have a little bit of farmland we picked up that we still have to spray, because we haven’t worked it into our way of farming yet, but our regular ground doesn’t need a post spray.”

In the near future, Hedrick plans on growing old heritage small grains for use in new varieties of alcohol. Additionally, he sees strong potential in open-pollinated corn. “Everybody says open-pollinated varieties can’t yield well. That is false. I believe if we put the time and effort in, we can get those open varieties to maybe exceed hybrids in healthy soil systems.” 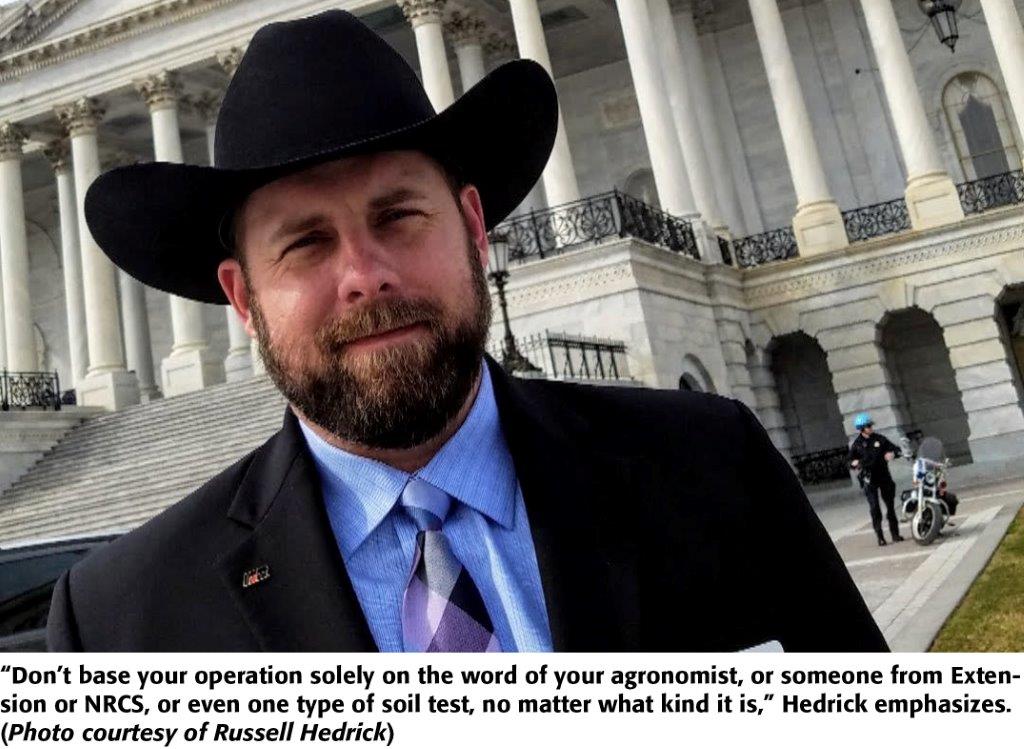 When Hedrick talks farming with other producers, or speaks at meetings, he drives home a consistent point: “Don’t take somebody else’s word, because you can always find guys with successes in soil health; you can always find guys with failures in soil health. Try something different on your farm and in your unique context, otherwise you’ll never truly know if it’ll work on your operation. Don’t base your operation solely on the word of your agronomist, or someone from Extension or NRCS, or even one type of soil test, no matter what kind it is.”

“All I know is that I had to change and it was the right thing. We all know more agriculture regulation is coming down the road, and I don’t want somebody I don’t know showing up and telling me how I have to farm.”

Rat Hunting with the Dogs of War, Farming's Greatest Show on Legs