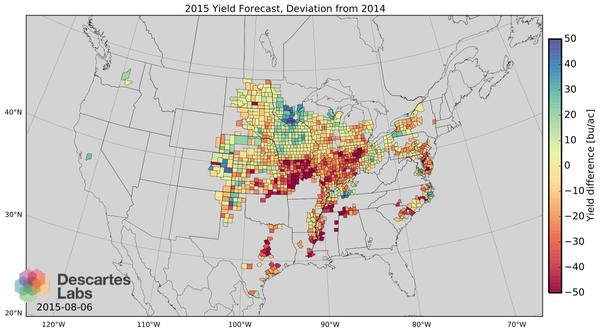 Daily infrared images of U.S. farmland captured by satellite indicate worsening conditions for this year’s U.S. corn crop, according to one data-analysis company.

Domestic corn production will be 13.34 billion bushels, Descartes Labs forecast. That’s down 6.4 percent from last year and also less than the 13.53 billion-bushel forecast by the U.S. Department of Agriculture last month.

National corn yields are seen at 164.9 bushels an acre, down from its 168-bushel forecast last month, the Los Alamos, New Mexico-based company said. That’s also lower than the USDA forecast of 166.8 bushels from last month.

“The numbers have moved, and more than normal this year,” Brumby said in an interview Friday. “The full effect of the wet weather has yet to make itself known. The yield is probably headed lower.’

A theoretical physicist, Brumby is a co-founder of the company, which started as a project at the Los Alamos National Laboratory in 2007. Descartes analyzes images showing farmland to a resolution of 1/5 of an acre (0.8 hectare).

‘‘We can see what’s happening to the crop without having to go out into the fields,” Brumby said. “We are using time, space and color to see plants change.”

Descartes isn’t alone in forecasting a smaller crop than the USDA. The average estimate of 31 analysts and trading firms in a Bloomberg survey last week was for 13.332 billion bushels.

On Wednesday, the USDA issues its first estimate of this year’s crop, based on farmer surveys and field-based observations from 1,800 locations.

The final crop size will be determined by weather in the next month as corn kernels are filled with starches and sugar. Too much rain, high winds or dry conditions can damage the crop as it matures toward harvest.

What do fields in your area look like? Send your photos and observations to AgWeb's Crop Comments section.