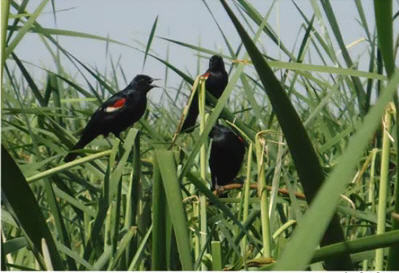 Until wildlife biologists informed him, California dairy producer Frank Mendonsa had no idea the birds flocking to his triticale fields this past April were called Tricolored Blackbirds.

More startlingly, Mendonsa discovered the birds had recently been emergency-listed as a California endangered species. It’s illegal to disturb their habitat or harm them in any way.
If Mendonsa harvested his hybrid-wheat crop before the birds had raised and fledged their young, he would be breaking the law. And the birds would not be leaving his fields until June at the earliest, a month later than his planned harvest.

But Mendonsa also learned something else. A new public-private partnership could help farmers like Mendonsa whose silage fields have attracted endangered wildlife.

“A unique partnership of dairy farmers and environmental experts continues to work together to help protect both an imperiled bird and the long-term sustainability of California’s dairy industry,” says Carlos Suarez, NRCS state conservationist for California.

Participants, including Mendonsa, say the project provides a win-win solution for farmers and the Tricolored Blackbirds.

Mendonsa, of Tipton, Calif., planted 215 acres of triticale in the fall of 2014. He intended to harvest the crop the following May for silage to help feed the 1,100 Jerseys he milks about 200 yards away. In April 2015, one of his triticale fields began drawing a large colony of the blackbirds. Two weeks later, a second group arrived in an adjacent field. In all, an estimated 15,000 Tricolored Blackbirds descended on 80 acres of Mendonsa’s triticale crop.

Distinguished by their red- and white-marked wings, the blackbirds were once the largest colonial songbird in California. But habitat loss, worsened by four years of drought, has decimated the species by an “alarming” 64% in the past six years, says Samantha Arthur, a field biologist with Audubon California.

Once totaling millions, the Tricolored Blackbird population declined to an estimated 145,000 by 2014. More than 50% of the endangered birds have relocated to Central Valley silage fields, where they build their nests within the branches of plant stalks. They remain in the fields until their young can fly away. Because the

Tricolored Blackbird is found almost entirely in California, nesting success is critical to its survival.
The conservation project is not only working to rebuild the population of the Tricolored Blackbirds by preserving their nesting colonies on Central Valley farmland. It’s also working to restore former wetlands located nearby in a longer-term attempt to bring back the birds to their original habitat sites.
“With this partnership, the birds have a chance of survival,” Arthur says.

The endangered birds couldn’t have picked a better Central Valley farm to relocate their nesting colonies. Earlier this year, Mendonsa became president of Western United Dairymen, a California trade group that represents 60% of the state’s milk production. In that position, he now has the spotlight to attract those who stand to be most affected by nesting Tricolored Blackbirds.

“I want to do the right thing, and the right thing is protecting these birds,” Mendonsa says. “I want dairy producers and farmers alike to see that this program is workable and to put their concerns at ease.”
By May 2015, the project counted five contracts with dairy producers who had nesting colonies in their fields.
The program’s $600 per-acre incentive payment to delay harvest doesn’t cover all their costs, Mendonsa acknowledges. “The feed value will be gone,” he says. “We’ll have to buy feed to replace these fields.”
Moreover, the delay will mean the corn silage that will follow in those same fields will lose some yield due to its later planting. But Mendonsa accepts the trade-offs.

“Once it was pointed out to me how few of these birds are left in the world and how many were on my property, I was very moved,” Mendonsa says. “I could see how much they needed my help and protection to build back their populations, so I have taken it upon myself to ensure their safety on this farm.”

What If Endangered Wildlife Appears on your Property?

Whether it’s in Wisconsin, Florida or California, your farm could become home to an endangered species. How can you be sure whether wildlife is protected?

First, do an Internet search for your state’s game and fish agency website, says Thomas Moore, state wildlife biologist with the California division of USDA’s Natural Resources Conservation Service (NRCS). Once you find the site, do some research.

“Look online for photos, wildlife description, habitat,” Moore says. “You can get a lot of information there without talking to an agency official.”

“I farm in this county and grow this crop near this kind of habitat. What endangered species might potentially be here?”

Keep in mind that some wildlife that aren’t imperiled can look similar to their threatened counterparts.
Dairy producers who are interested in managing a portion of their property to benefit an endangered
species can check out the Regional Conservation Partnership Program available through NRCS, or visit
www.dairytoday.com/rcpp.