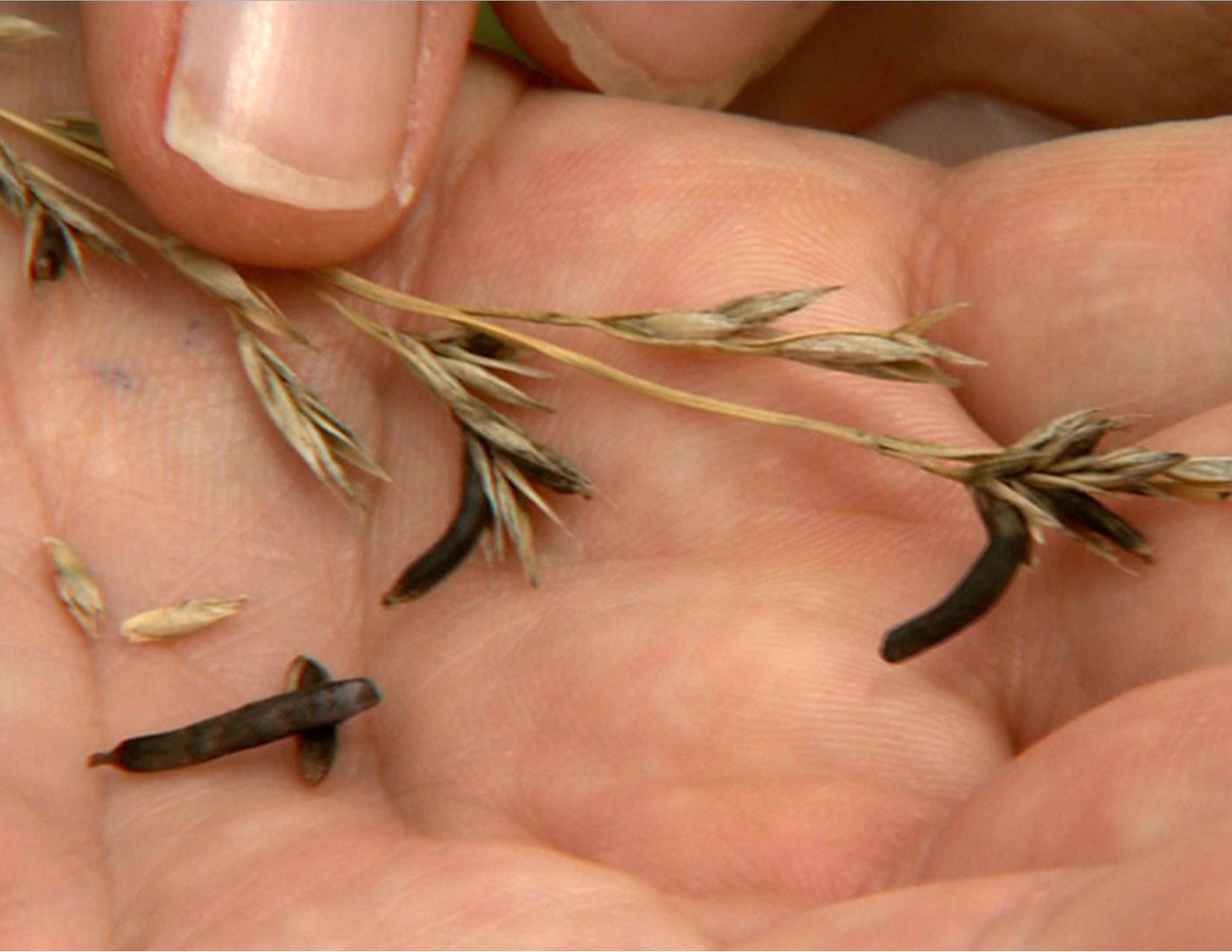 Get out in your fields prior to harvesting hay and scout for deadly ergot.
By: David Burton, University of Missouri Extension

Ergot has been reported in several hayfields and pastures across southwest Missouri according to University of Missouri Extension Agronomy Specialist, Sarah Kenyon.

"Death can occur when livestock consume large amounts of ergot. That is why I urge farmers to scout their fields now to determine if this pest is present," said Kenyon.

This fungal infection creates hard ergot bodies in the seed of grasses. The ergot bodies look like mouse droppings and are visible in the seed head of cereal grains like barley, oats, wheat, triticale and rye, as well as common grasses such as timothy, perennial ryegrass and tall fescue.

Cattle may seek relief in the shade or stand in water. Other symptoms might include rapid breathing, sloughing of the switches of tails and tips of ears, abortion, and decreased milk production. Livestock deaths may result when livestock consume large quantities.

Ergotism can be confused with fescue foot or fescue toxicosis because the symptoms are similar. However, ergot bodies (the ones that look like mouse droppings) have a thousand times more toxic alkaloids than those of fescue toxicosis. Because the toxin concentration is so much more, the animal symptoms appear quicker and are much more pronounced.

"If ergot is observed, producers should immediately move livestock from infected fields," said Kenyon. "Producers may also consider feeding other sources of feed to dilute the amount of ergot that is consumed. Farmers should also inspect the hay for ergot bodies. If the hay is infested, it can be destroyed or diluted with other feeds."

Ergot alkaloids are toxic to many species, including other ruminants, llamas and alpacas, horses, and even swine, dogs and humans eating infected grains. Ergot poisoning has also been linked to human epidemics in the Middle Ages.

"The alkaloid toxins in ergot are chemically related to LSD, and some scientists suggest that bread made from infected rye may have played a role in the 17th-century witch trials in Salem, Mass., and even the French Revolution," said Kenyon.