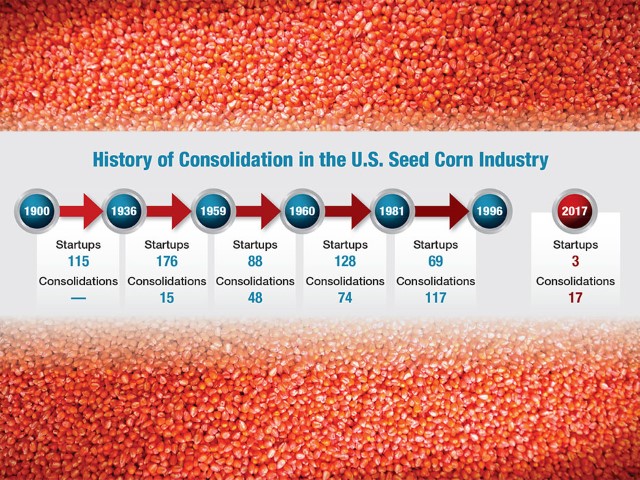 Multinational company mergers might dominate the headlines, but smaller-scale regional mergers and startups have been on the increase in the seed industry. The industry is ripe for mergers, expansions and even new businesses.

“In terms of transaction volume in the consolidation of the U.S. seed industry, the peak was in the early 2000s, when Monsanto bought about 30 regional companies,” says Garrett Stoerger, partner at Illinois-based Verdant Partners. “More recently, we’re seeing a shift toward acquisitions by private equity firms or independent, regional companies. This new dynamic should provide more competition and scale for independent companies.”

“One challenge ahead of independent companies is succession planning,” says Todd Martin, president and CEO of the Independent Professional Seed Association. “A lot of companies focus on sales and marketing, but what happens when family is ready to retire?”

For example, Golden Acres, based in Texas, sold to AgReliant two years ago as part of the family’s succession plan. The sale allowed the family to remain involved in the business as it transitioned.

“I’m 66, so certainly I think about [succession planning] when we hire people,” says Glen Davis, Legend Seeds CEO and president. “I have people who come to work for us and wonder what will happen when I’m gone. I hope that’s not for a while, but you have to have some succession planning in place—every business needs that.”

Obviously, each regional or independent seed company handles succession planning differently. For example, Wyffel’s Hybrids is a family-owned and -operated business. Other companies, however, might not have a next generation in the ranks so they have to look for alternatives, such as transitioning to a trusted employee or a sale.

“In large part, seed companies and farmers are going through kind of a generational shift,” Martin says.

The shifts in the seed industry could actually benefit farmers. As the industry changes, it provides opportunities for seed companies to differentiate and grow while focusing on helping farmers.

“If there are fewer but stronger independent companies remaining, they should be more competitive in the marketplace,” Stoerger says. “Seed companies have to be strong individually to thrive in the future.”

Recently Local Seed Company announced its new entry into the market. Headquartered in Memphis, Tenn., the company is a combination of Dulaney Seed of Mississippi and TA Seeds of Pennsylvania. The company says it’s merging the best practices of both companies, direct-to-grower roots of Dulaney and strong grower–dealer network from TA Seeds, to play to their strengths and focus on local needs.

“We believe there is a multitude of quality seed choices for the farmer. While consolidation might feel like it limits choice, we believe it provides the opportunity to grow,” says Charles Michell, CEO of Local Seed Company. “As we think about our product market strategy we’re thinking more holistically about how to create return on investments for the grower.”

He compares what’s happening in the seed industry to what happened in the adult beverage industry a few years ago. When Anheuser-Busch bought out several breweries, it left a hole in the market, which allowed for an explosion of local- and craft-beer makers to find their niche. Today, the industry, while more consolidated than years past, offers a large number of choices for customers.

“One of the great things about regional companies is we’re positive about the outlook for ag—we think it’s the best industry and people to work with,” Davis says. “Farmers are often concerned the bigger a company gets the less it cares about the customer. We don’t have accountability to shareholders—as long as customers are successful that’s what matters.”

Regional and independent seed companies need continued partnerships with multinational companies despite mergers. These companies rely on licensing to provide them with needed genetics and traits for farmers.

“There’s always concern that when multinationals consolidate we might lose access to some licensing products,” Michell says. “But we feel as long as we steward traits and genetics in a way that meets the needs of the market and we grow ours and the germplasm business they’ll leave us alone in the short term. But I don’t know what will happen three to five years from now.”

Licensing from multinational companies is one of the key drivers of new products offered by independent and regional seed companies. In light of recent mega mergers, these companies are asking to retain access to products in the long-term.

“As we look at DowDuPont, we’ve seen DuPont, through ProAccess, try to enter the licensing space. Dow has had a robust licensing arm with independents for a number of years,” Martin says. “As Dow and DuPont consolidate, there has been indication we will see additional assets be made available to independents that weren’t available before, which is positive for independent seed companies and farmers. With Monsanto and Bayer, we have less clarity at this time, but both companies have voiced a commitment to the licensing strategy exemplified by Monsanto. Syngenta has recently announced a new commitment to seed by investing $400 million over the next several years.”

From what many of the multinational companies indicate, licensing is safe for now, providing independent and regional seed companies access to innovation and choice.

As the industry evolves, seed companies of all sizes will have the opportunity to differentiate and capture new markets. Farmers should keep an eye on how things are changing in their area, and what that means for their choices and ability to negotiate.