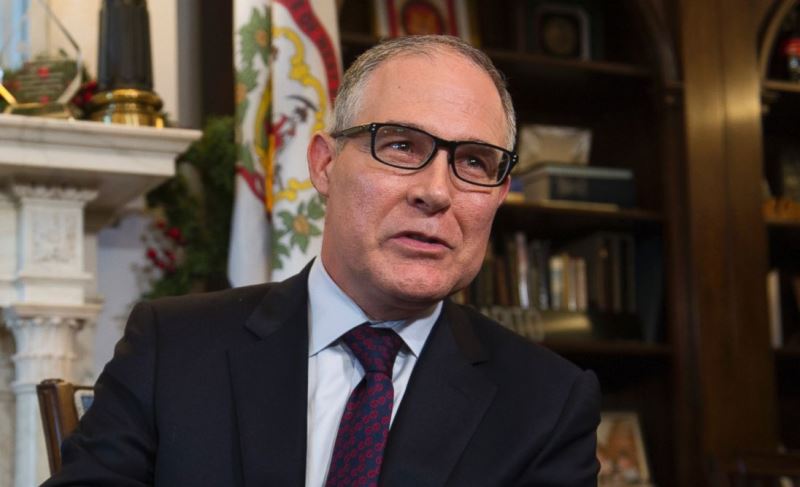 By a vote of 52-46, the Republican-controlled Senate on Friday cleared Pruitt’s nomination to be EPA administrator over the objections of Democrats who argued he would undermine the agency’s core mission of safeguarding the air and water.

Pruitt promised senators last month that his "cooperative federalism" approach would not mean an end to nationwide environmental regulation, but rather "meaningful collaboration between the EPA and the states to achieve important environmental objectives."

"The states are not mere vessels of federal will; they don’t exist simply to carry out federal dictates from Washington," Pruitt said at his confirmation hearing.

Pruitt is expected to quickly begin work to fulfill President Donald Trump’s vow to eliminate a water pollution rule and the Clean Power Plan that forces states to slash greenhouse gas emissions from electricity generation. Trump is poised to sign directives setting those changes in motion soon after Pruitt is confirmed.

Pruitt joined more than two dozen other states in challenging the Clean Power Plan, saying the Obama administration overstepped its authority by establishing statewide goals and giving regulators a variety of ways to meet them. Under a plan he set out in 2014, the regulation would be limited to imposing carbon-cutting mandates on individual power plants, resulting in relatively negligible reductions.

Some conservatives want Pruitt to go further and undo the legal underpinning for that regulation: the EPA’s 2009 conclusion that greenhouse gas emissions endanger public health and welfare.

But any of those efforts will face internal opposition from an agency that had made combating climate change its top priority over the past few years.

EPA employees have organized to try to block Pruitt, with current staffers protesting at a rally in Chicago, nearly 800 former employees signing a letter arguing against his confirmation and the union representing agency employees launching an online campaign to "Save the EPA."

"Pruitt’s record and public statements strongly suggest that he does not share the vision or agree with the underlying principles of our environmental laws," the former employees said in their letter.

Senate Democrats said Pruitt didn’t provide substantive answers to their questions and rebuffed requests for an assortment of documents -- including e-mails and other records of his interaction with agricultural and oil companies -- by recommending senators use public records requests to get the material from Oklahoma officials.

After a court on Thursday ordered the release of hundreds of Pruitt’s e-mails and other documents from his time as attorney general, Democrats tried to get Pruitt’s confirmation vote delayed until those documents could be reviewed. They failed.

"For years, all we heard from Republicans -- including Trump -- was e-mails, e-mails, e-mails," said Senate Minority Leader Chuck Schumer, a Democrat from New York. "It’s not the worst thing in the world to take a few extra days to properly vet someone who will have immense power over our nation’s streams, skies -- even the lead levels in our homes, our schools and our water supply."

Democrats warned that Republicans could pay a political price for backing Pruitt. "Those who vote for this man will own this vote," said Senator Sheldon Whitehouse, a Democrat from Rhode Island. "This isn’t the end of the story. This is the beginning of the story."

Democrats crossing party lines to support Pruitt were Joseph Manchin of West Virginia and Heidi Heitkamp of North Dakota. One Republican, Senator Susan Collins of Maine, voted against the nomination. Two senators, Joe Donnelly of Indiana and John McCain of Arizona, were not present for the vote.