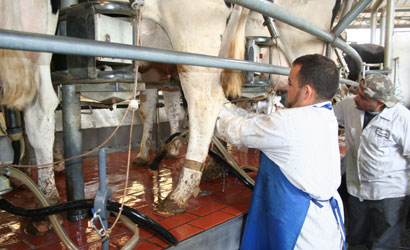 The Senate today approved a comprehensive immigration reform measure that will help dairy farmers with their current and future workforce needs, and provide the entire agriculture sector with much-needed economic certainty, according to the National Milk Producers Federation (NMPF).

"We’ve known for years that the status quo employment situation in dairy farming is not sustainable," said Jerry Kozak, President and Chief Executive Officer of NMPF. "Today, the Senate moved decisively past that admission, and voted to change our labor and immigration laws for the better. Rather than tinker with what wasn’t working, this new immigration measure builds something new and much better."

The immigration reform measure, approved today by a vote of 68-32, strengthens the border security apparatus to discourage the flow of illegal immigrants to the U.S. From the standpoint of farm employers, it creates an entirely new visa category for their workers, both current employees and prospective new employers. This new visa system will be administered through USDA, making it easier for farmers and ranchers to access and use. It will also assure a future flow of new workers, so that as the economy evolves and jobs shift between sectors, farmers will have the means to recruit and hire new dairy workers.

"Dairy farmers have been concerned that their current workers might be overlooked by the reform efforts, but the Senate bill addresses that concern, by allowing currently employed, but undocumented, workers to maintain their jobs. This is a huge benefit, both to workers, and their employers," Kozak said.

Kozak noted that regardless of the region of the country, many dairy farmers "face ongoing challenges finding a sufficient number of workers to care for and milk their cows. Securing a reliable and competent workforce for our nation’s farms and ranches is essential to ensuring that American consumers continue to enjoy dairy products on their grocery store shelves," he said.

Kozak stressed that even with today’s history Senate vote, much more work on immigration reform has to be done this year on Capitol Hill. Negotiations are continuing in the House of Representatives, which is working on a separate bill, and where broad support for a comprehensive immigration reform measure is less certain.

"The key is to demonstrate to a majority of the House that action is needed," Kozak said. "The bill the House will consider is going to be different than this Senate bill, but the critical thing is that a bill addressing the needs of agriculture must be passed by the House. Inaction is not an option."

Throughout the immigration reform process, NMPF has worked with other farm worker and farm employer organizations in the Agriculture Workforce Coalition.