Simple Steps to Improve Your Soil 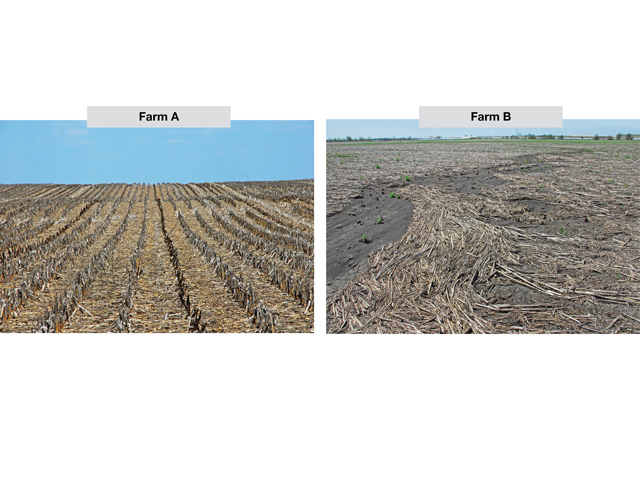 Residue remains in place on Farm A, while rainfall has obviously washed away soil and residue on Farm B, reflecting the differences in soil health of the two fields. After three years of improving soil health, those differences are far less evident.
( Darrell Smith )

The operators of both farms use similar practices, with one exception: Farm A has been no-tilled for about
30 years, while Farm B was farmed with horizontal tillage before the current operator acquired it four years ago.

Besides lower yield, Farm B suffered from soil erosion—water run off because of surface sealing from poor soil structure—and a lack of nightcrawler burrows. A soil pit revealed impenetrable soil layers on Farm B, compared to a healthy crumb-like structure containing macropores for water and air on Farm A.

During the three-year period, yields increased on both farms, Ferrie points out. That shows the impact of
improved corn genetics in addition to improved soil health on Farm B.

Acidity and soil density are among the easiest soil health problems to fix, so that’s where Ferrie and the farm operator concentrated their efforts. Ferrie calls it “shooting the slow rabbits first.” Acidity is a chemical aspect of soil health, he notes; density issues are a physical aspect; and microbial activity and diversity, which are tougher to improve, are a biological aspect.

“We deep-tilled to fix subsurface compaction and remove dense layers and chisel-plowed to break surface compaction and mix in limestone,” Ferrie says. “Over three years, we converted the field to a vertical format, free of sudden density changes and soil compaction, by using vertical tillage. By 2014, the operator was able to put the field back into a no-till system, which he prefers.”

To correct acidity, the operator applied lime in the fall for three years, incorporating it with his fall vertical tillage. In 2010, the pH values ranged from 4.9 to 5.2. By 2014, after the lime application, they had risen to 5.8 to 6.4.

“The calcium in the limestone helped improve aggregate stability and soil structure by flocculating the clay particles,” Ferrie says. “A health assessment analysis in 2014 documented significant improvement, although we still have further to go.”

The score might have risen further, but some of the “rabbits” the operator is trying to shoot run faster than others. “Cover crops would have helped improve the soil’s biological activity and nitrogen supplying power,” Ferrie says. “We flew on a mixture of annual ryegrass and radish seed in October 2012, but we could not get the crop established because of dry weather.”

Because he’s aware of his soil’s low nitrogen-supplying capacity, the farm operator compensates by breaking up his nitrogen applications to make sure the crop never runs short. “He applies nitrogen in his dry fertilizer, a weed-and-feed treatment and in-starter fertilizer at planting,” Ferrie says. “He sidedresses the rest, using soil nitrate tests to determine what rate to apply.”

It’s important to prioritize your efforts when you set out to restore soil health, Ferrie says. “Farm B’s yield improvement has resulted mainly from correcting acidity and compaction,” he emphasizes.

Farm B’s rehabilitation continues. “There’s still more to be done on soil pH,” Ferrie says. “But we will have to move more slowly, applying lower rates of lime because the operator is no longer doing tillage to incorporate it.

“Until we improve the aggregate stability and infiltration rate, we’ll worry about soil erosion, surface crusting and residue washing into piles. Going to no-till should reduce erosion; but to combat surface sealing, and to help the soil dry out for planting, we’ll run a vertical-till harrow in the spring to size residue and break the surface crust until we establish biopores and better water infiltration,” he adds.

Until the soil’s nitrogen-supplying power improves, Farm B will need higher rates of nitrogen than other fields, which are in long-term no-till. “While no-till will help build soil health, increase biopores and improve biological diversity, it can’t accomplish our end goal—a high soil health rating—all by itself,” Ferrie says. “We’ll try to find ways to use cover crops to promote aggregate stability, increase microbial diversity and build organic matter content.