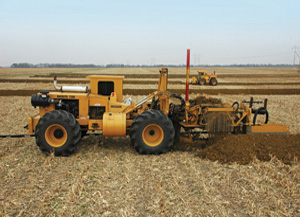 If you have waterlogged cropland, no investment will pay off faster than improved drainage, says Farm Journal Field Agronomist Ken Ferrie. Today’s high land and com-modity prices make the payoff even higher than it was a few years ago. Not surprisingly, many farmers are considering adding tile to their fields.

Here are six tips to help you make tiling decisions.

1. Now is the time. If you hurry, you might still be able to capture federal tax breaks for drainage work completed in 2011. If you miss the boat, keep your fingers crossed that the benefits are extended for 2012.

"Historically, drainage systems have been written off over a 15-year period. That hasn’t changed," he says. "For 2011, the bonus depreciation deduction was increased from 50% to 100%, and the expensing election was increased to $500,000."

Baker is optimistic that the tax incentives will be renewed for 2012. "If they are, they might be adopted by some states, providing additional savings on your state tax return," he says.

"Don’t expect the tax incentives to purchase assets to last forever, though," Baker adds. "If you can complete drainage work in 2011, do so. Then check with your tax person to see if the new rules are extended through 2012."

2. Will drainage pay? First, you should confirm you have a drainage problem. Thanks to NDVI (Normalized Difference Vegetation Index) photos and yield maps from your combine monitor, it’s easier than ever to determine whether waterlogged soils are curbing yields, and by how much.

"The first step is to examine several years of NDVI photos, along with yield maps from a calibrated monitor," Ferrie says. "If the same low-yielding areas show up for several years, it’s likely a drainage problem.

"To quantify the benefits of drainage, compare the field to one of similar soil type, managed in a similar fashion, which has been systematically tiled, not just in the wet areas," says Dave Williamson of Williamson Farm Drainage Inc., in Bloomington, Ill. "The farmers of such fields can give you a good idea what to expect."

Not surprisingly, the payoff varies with soil type. "The economics aredifferent for more-productive and less-productive soils," Williamson says. "With a few exceptions, the most
productive soils tend to have the worst natural drainage." So they are likely to provide the greatest return from improved drainage.

3. Multiple benefits. Most of the return from your tiling investment will result from increasing yield in the wet area to match the rest of the field. But there are additional ways tiling might pay off.

You might be able to plant the entire field in a more timely fashion, since you probably don’t plant any of it until the whole field dries out, Ferrie says. Even then, the wet portion might still be damp enough to provide a poor seedbed, which lowers yield.

The effects of a wet spot or improved drainage build on themselves, Ferrie continues. "If an area is wet, you miss the optimal tillage, planting and side- dressing dates on the dry part of the field, waiting for that wet part to dry out," he explains. "The whole field’s average yield is dragged down.

4. Outlet issues. "There are few fields where it’s impossible to improve the drainage," says University of Illinois ag engineer Richard Cooke. "However, there are situations where the cost may be too high."

"The cost of outlets can be reasonable where you have a drop in the landscape," Ferrie notes, "but in flat areas, they can cost as much as the laterals. If the cost of an outlet is an issue, consider installing the outlet this year and adding lateral lines later."

Finding an outlet might require crossing a neighbor’s land or tying into his main line. "You probably won’t be turned down if you want to connect to a creek," Williamson says. "But a lot of mains already are at full capacity."

Whenever you have to work with adjacent landowners, try to find ways that both of you can benefit.

5. Limited funds. If you have limited resources, consider spreading out the cost by draining only the areas that offer the greatest return. For example, if you have highly productive and
less productive soils in the same field, target your drainage to the most productive soil, Williamson advises. "But design the system for the entire field. If you decide to drain the other soils later, you’ll save money and have a better drainage system by completing the design work now," he explains.

6. Persuade landlords. If you don’t own the land, you will have to persuade your landlord to make a major investment. With a crop-share lease, sharing the information from NDVI photos and yield maps and running cash-flow scenarios showing improved yields might help you make your case for drainage, Ferrie says.

Estate planning can be persuasive, Williamson adds. "If the landowner has cash and is subject to estate taxes, he can reduce the size of his estate while improving the land for his heirs."
If the landlord pays for the tile, he probably will expect a higher rental rate as a return on his investment, Hofstrand points out. Another approach is for the tenant to pay for the tile while holding the rental rate stable.

In a crop-share situation, landlords and tenants can share the cost of tiling. This route requires a long-term lease or annual lease with a formal buy-out contract to protect the tenant if he gives up the land, Hofstrand adds.

Sometimes, financial considerations or the lack of an adequate outlet might force you to compromise in the design of a drainage system.

"Your objective with drainage is to pull the soil saturation line down 5" or 6" below the surface within 24 hours after a saturating rain event," says Farm Journal Field Agronomist Ken Ferrie. "Your drainage contractor can tell you the spacing of tile required to do that, based on your soil type.

"What if you don’t have the money to put in lines at the ideal spacing? One option is to put tile at a wider spacing, then add more tile later as funds become available," Ferrie adds. "For example, tile at 120' intervals now, and later split the intervals to 60', or 30' if necessary."

What if you can’t find an outlet adequate to carry off the water after a big rain event? "In that case, you might want to put the tile deeper, so you can draw the water table down ahead of time," Ferrie says.

If unseasonably dry conditions follow a wet spring, a well-drained field might be even more advantageous, says University of Minnesota Extension engineer Gary Sands. "The crop might tolerate the drought better because drainage enabled it to build a deeper root system, potentially
giving it access to moisture deeper in the profile."