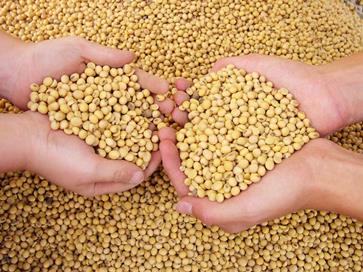 Soybean meal advanced to a four- month high as meat prices close to a record spurred demand for animal feed to fatten hogs and chickens.

Wholesale pork, chicken and beef prices have climbed to records this year, contributing to an October rally in soybeans, meal and grains used to feed livestock. Retail pork chops and bacon increased to all-time highs in 2014 after the hog herd was reduced by a deadly virus. About 42 percent of U.S. soybean production is made into food for animals.

“Meat and dairy producers need the product,” Richard Feltes, the vice president of research at R.J. O’Brien & Associates in Chicago, said by phone. “Farmer selling of soybeans is less than both exporters and processors need, and that’s building a bid in the market to pry loose more bushels.”

Soybeans increased as much as 2.8 percent to $10.41 a bushel today, the highest level since Aug. 22, after the U.S. said yesterday that exports for inspection climbed for a record eighth week from the U.S., the world’s top producer. Reserves from last year’s crop have dropped to the lowest since 1973, government data showed this month.

Export Inspections
Futures rose 3.3 percent last week, the most since late May and the fourth straight gain, the longest run in 13 months.

Soybeans inspected for export increased 8.5 percent to 2.2 million metric tons in the week ended Oct. 23 from a week earlier, the highest in 11 months, the U.S. government said.

The October rally in soybean and meal prices pared losses spurred by the outlook for record-high U.S. oilseed output. The government has said that the crop will rise 17 percent to 3.927 billion bushels from last season.

Tags:
Cattle
Corn
MARKETS
$100 Ideas
Science Experiments
Some Areas Too Wet, Others Too Dry
The Role of Veterinarians and Nutritionists as Consultants for Dairies
Are All Bets Off for Phase One Trade Deal with China?
Jerry Gulke: Letting Time Pass May Pay Dividends