Soybeans are Shipping Out at Record Pace 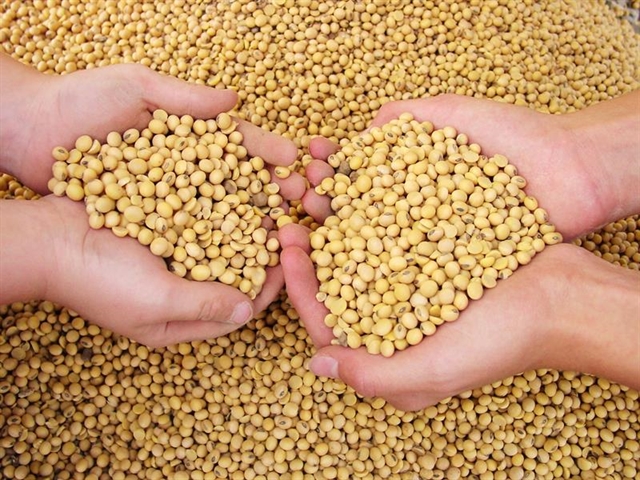 The world can’t seem to get its fill of soybeans.

Exports from the U.S. and Brazil, the world’s largest growers, are the highest ever for this time of year, and demand is poised to eclipse earlier government forecasts for a record this season. While big harvests have left inventories at all-time highs, prices have started rebounding from last month’s one-year low. That’s because cheap supplies are fueling voracious consumption to make soy-based animal feed and cooking oil, especially across Asia.

China, the biggest buyer, boosted first-quarter soybean imports by 20 percent from a year earlier, and the pace is twice what it was as recently as 2010, government data show. The country maintains the world’s largest pig herd, and it is using more soy-based feed after the government imposed restrictions on imports of a corn-based alternative.

“China does not want to get caught without soybeans,” said Pedro Dejneka, a partner at Chicago-based MD Commodities, which also has offices in Brazil. Dejneka says China’s imports may reach 91 million metric tons in the year ending Sept. 30, topping an estimate last month by the U.S. Department of Agriculture for a record 88 million, he said. That’s up from 83.2 million a year earlier.

Exports by the U.S., the top grower, are running at the strongest pace in two decades, at a time of the year when shipments are usually slower. Soybeans inspected for export rose to 521,218 tons in the week ended April 27, up 62 percent from a year earlier and the most for that period since 1997, government data show.

Since Sept. 1, at the start of the harvest, shipments are 15 percent above last year’s record pace, signaling the USDA’s full-season forecast of 55.1 million tons may be too low. But that isn’t just because of China. There have been more purchases from Indonesia, Thailand, Pakistan, South Korea, Bangladesh, Taiwan, Malaysia, Vietnam, Egypt, the Netherlands and even neighbors Canada and Mexico, data show.

Brazil is expected to be the largest shipper this year. In the first four months of 2017, exports rose to 27.7 million tons, 17 percent more than a year earlier, according to Anec, an exporters group. China accounted for 21.6 million of the total, up 18 percent.

“World demand for soybeans was surprising in the past months,” and expectations for the year are being revised because “Chinese imports remain very strong,” said Vinicius Ito, an analyst at Ecom Trading in New York.

That doesn’t mean the global surplus is going away anytime soon. Farmers in the U.S. and Brazil, who together account for two-thirds of all production, had their biggest harvests ever, and the USDA predicted last month that global stockpiles will jump 13 percent this season to a record. Inventories in the U.S. alone will double to a 10-year high.

Concern about big crops sent benchmark prices last month to $9.2975 a bushel, the lowest in a year. But all that cheap supply has encouraged buying, sparking a rally. Soybean futures in Chicago traded at $9.8025 at 10:35 a.m. local time on Friday.

Still, many Brazilian growers are holding on to more of their crop because prices in the local currency, the real, are so much lower than a year ago, which means rising domestic inventories and less competition for U.S. exporters.

Only 51 percent of this year’s Brazilian crop was sold as of April 28 -- the lowest in seven years and well behind the five-year average of 64 percent on that date, according to the Uberlandia, Brazil-based consultancy Celeres.

In Mato Grosso, Brazil’s top producing state, farmers are getting about 58 reais ($18.20) for a 60-kilogram (132-pound) bag of soybeans that costs about 55 reais to produce, according to Tarso Veloso, an analyst at Chicago-based AgResource Co.

“We have a huge crop, but this season will definitely be less profitable than the previous one," said Bartolomeu Pereira, a farmer who heads the growers group in Brazil’s Goias state. “Farmers are just waiting for rewarding prices.”

American farmers usually harvest from September to November and dominate the world export market until cheaper Brazilian supplies start arriving from March through May. But U.S. shipments have remained stronger longer this year.

It costs more to ship soybeans from Brazil to Asia and Europe than from the U.S. Gulf and the ports in Pacific Northwest. A strengthening of the real against the dollar has also discouraged some Brazilian sales, and made large stockpiles in the U.S. more competitive.

“If nothing changes, Brazilian farmers are likely to continue hoarding the beans,” said Lucas Brunetti, an analyst at Pine Research, an industry consultant in Sao Paulo. That would mean fewer exports and bigger inventories than expected, which would be “bearish for prices in Brazil next season,” he said.