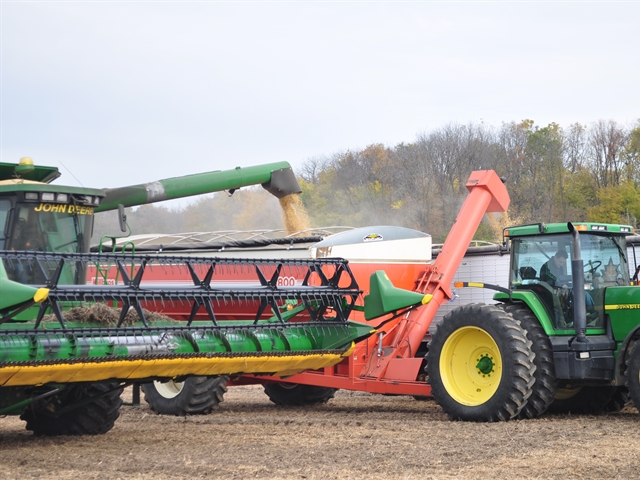 Soybeans and corn fell for a second day in Chicago as reports showed the U.S. harvest is gathering pace and output this season is expected to be the largest ever.

Farmers harvested 65 percent of corn in the main U.S. growing areas as of Nov. 2, faster than analysts expected and up from 46 percent a week earlier, the U.S. Department of Agriculture said yesterday. The soybean harvest was 83 percent complete, from 70 percent in the prior week. Output in the U.S., the top grower, may total 14.783 billion bushels of corn and 4.033 billion bushels of soybeans, less than previously expected while still the most ever, INTL FCStone said yesterday.

“More dryness across the Corn Belt and the plains allowed farmers to catch up on harvests and winter wheat planting last week,” Morgan Stanley analysts including Bennett Meier said in a report e-mailed today. “Limited rain across the Corn Belt should allow for relatively rapid progress again this week.”

Soybeans for January delivery fell 1.3 percent to $10.165 a bushel at 6:48 a.m. on the Chicago Board of Trade, extending yesterday’s 1.9 percent drop. Corn for December delivery slid 1.4 percent to $3.6825 a bushel, after falling 0.9 percent yesterday. Soybeans gained 15 percent and corn rallied 17 percent last month as rains delayed the U.S. harvest.

Wheat for delivery in December lost 0.7 percent to $5.3425 a bushel in Chicago. U.S. farmers are almost finished planting winter wheat crops, with 90 percent of intended area sown as of Nov. 2, the USDA said yesterday. In Paris, milling wheat for January delivery declined 0.7 percent to 172.25 euros ($215.55) a ton on Euronext.