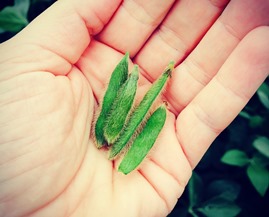 Soybeans headed for the largest gain in a week on concern that dry Midwest weather is eroding crop quality just as demand increases for supplies from the U.S., the world’s top grower. Corn and wheat also rose.

About 70 percent of the soybean crop was probably in good or excellent condition as of yesterday, down from 71 percent a week earlier, a Bloomberg survey showed. Exporters sold 110,000 metric tons to China and 102,000 tons to Taiwan for delivery in the 12 months starting September 1, the government said today.

"Rains were a little disappointing over the weekend," Phyllis Nystrom, a risk manager at Country Hedging Inc., said in a telephone interview from Inver Grove Heights, Minnesota. "Then the new sales gave it a little extra bump."

Soybean futures for November delivery rose 1.6 percent to $10.7575 a bushel at 11 a.m. on the Chicago Board of Trade, heading for the biggest gain since July 28. Prices rebounded after touching $10.54, the lowest for a most-active contract since October 2010.

While rain is forecast for some growing areas this week, dry spots will leave as much as 25 percent of soybeans short of moisture, according to a report by Commodity Weather Group. The U.S. Department of Agriculture will issue its crop-ratings report at 4 p.m. in Washington today.

Corn futures for delivery in December added 1 percent to $3.6575 a bushel on the CBOT.

Wheat futures for September delivery rose 2.3 percent to $5.465 a bushel, after touching $5.5325, the highest for a most-active contract since July 18.