Spreading the Christmas Spirit with Farm Toys for Tots 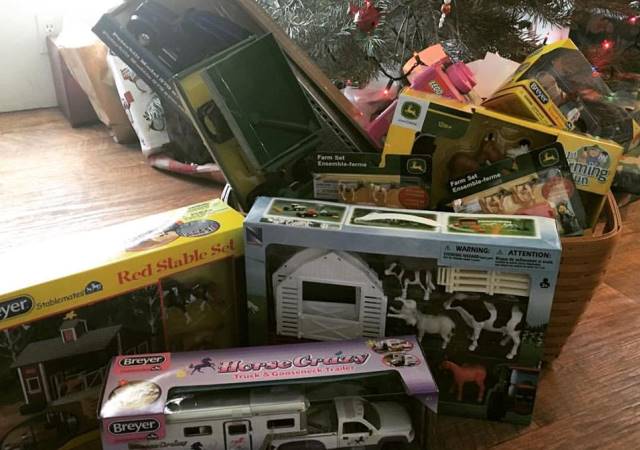 An animal rights activist tried to be the Grinch, but it backfired with the help of some kindhearted people who share rural roots.

This Christmas, children across the country will be unwrapping farm toys, thanks to several agriculture advocates.

Earlier this fall, animal rights activists attempted to have a toy livestock hauler removed from Walmart because it promoted animal agriculture. While the change.com petition never met its goal of 15,000 signatures, it did inspire folks in the farming community to take action for a noble cause.

The toy program exceeded expectations with donations eclipsing the $5,000 goal set at the beginning of the initiative with 207 people contributing online.

Prichard shared how the campaign came about and the performance on her Righteous Bacon blog:

Here's a sampling of the Farm Toys for Tots posts we found on social media:

Got to be an elf today and deliver some #FarmToysforTots How is your Friday starting?

Love that local Marines are helping with the #toysfortots drive at my office! And this guy said he was certain some child would be thrilled with the #farmtoysfortots

Got our Angel Tree Tag name an extra gift for Christmas! Even added a story from a real rancher encouraging this youth...

This isn't a slaughter truck. Help us give farm toys this season. #FarmToysForTots. https://t.co/x21KDHoC9c #agchat pic.twitter.com/g2m1NzhBX7

Looks like there will be plenty of children enjoying the same toys that many rural kids play with every day on their farms and ranches.

And, if you were wondering about buying one of those “slaughter trucks,” they’ve sold-out online and currently have a five-star rating.